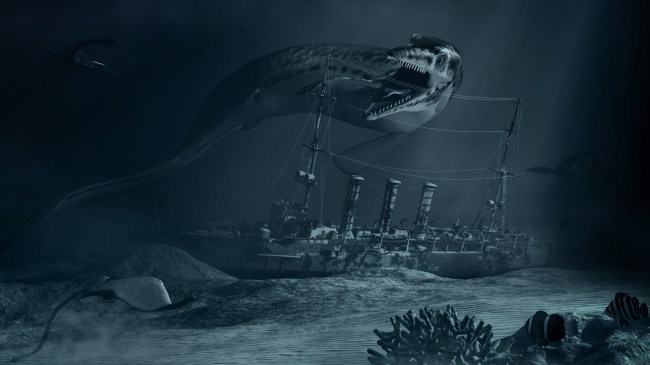 The ocean is so vast my feeble little mind cannot even begin to comprehend how much is out there. I’ve always been fascinated by the monstrous creatures which occasionally get coughed up by the Gates of Hell and wash up on a beach. This fascination of mine is probably due to the fact that I grew up on Siesta Key, an island here in Florida where we regularly get Red Tide, a bacteria bloom which kills all the fish in the area and they wash up on the shore. We’d go to the beach as kids and see creatures that were straight up sea monsters washed up on shore.

These latest creatures? They’re equal parts horrifying and fascinating. These creepy jet black sharks are exceedingly rare. They also have extendable jaws like snakes. The species in question is the Viper Dogfish, and they were caught off the coast of Taiwan by a crew surveying fish species populations in the area.

Feast your eyes on these monsters:

Here’s a look at that horrifying double jaw:

Jaws of the viper dogfish is a twofer. pic.twitter.com/BuZywFdrUB

#Oceans: Rare #Sharks With Bizarre Jaws Have Turned Up Off The Coast of #Taiwan 🦈https://t.co/FY40C2IS95🦈 pic.twitter.com/9INa3vPbLA

For the viper dogfish, there is little light penetrating as deep as the shark likes to swim, around 270 to 360 metres (890 to 1,180 feet), and it could be using its photophores for attracting mates or prey.
On the other hand, other fish with ventral photophores use them as camouflage to protect against predators from below. When they light up their undersides, they’re harder to see against the light from the sky far above.
The shark has needle-like teeth and narrow, triangular, extendable jaws that allow it to reach out and snatch prey.
It feeds on bony fish and crustaceans, based on partially digested remains found their stomachs, probably swallowing its catches whole. (via)

Thankfully for anyone who loves swimming in the ocean, there’s some good news in all of this. These sharks are pretty small. They measure around 21 inches. They’re also found at very extreme depths. So the chances of coming face to face with one of these hell hounds is slim to none.