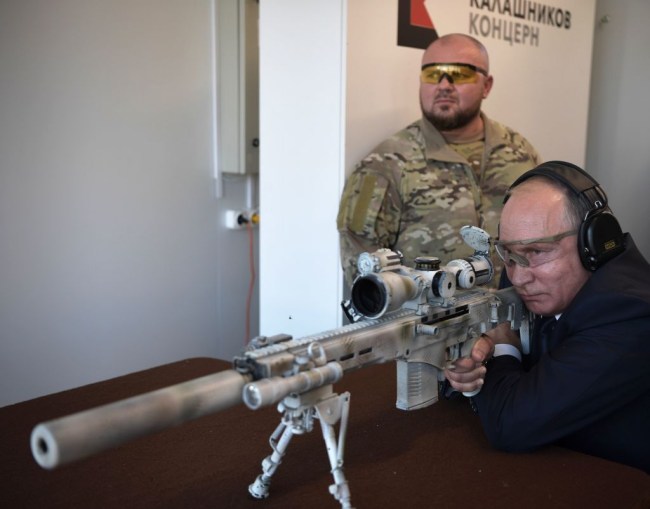 President Vladimir Putin is finally addressing the deadly nuclear explosion that happened in August. The Russian President paid tribute to the dead scientists who were killed in the lethal blast by boasting that they did not die in vain because they were creating the “most advanced and unparalleled” weapon in the world. Weird flex, but okay.

On August 8, there was a massive explosion at a military test facility in Nyonoksa in the northern Arkhangelsk region. The blast on an offshore platform in the White Sea at the Nyonoksa naval base killed seven people, five of which were members of Russia’s Rosatom nuclear agency, and two others were from the Defense Ministry.

The explosion was so large that it could be seen in Severodvinsk, about 30 miles away, and radiation levels spiked 20 times above the normal level. The lethal accident was said to have happened during the testing of an “isotope power source” for the experimental “liquid-propellant [missile] engine.”

On Thursday, President Vladimir Putin put his own spin on the deadly incident, three months after it occurred. The widows of the scientists who died in the accident were summoned to the Kremlin, where Putin presented the women with their husbands’ posthumous Orders of Courage.

The Russian President attempted to put a happy bow on the death-dealing misfortune with the “glass is half full” approach that the scientists were developing the “most advanced” weapon with “unparalleled” capabilities.

In Putin’s eulogy to the scientists, he said, “They were working on a very difficult, important, and critical assignment.”

Then he went on to brag about the potentially devastating weapon they were working on. “We’re talking about the most advanced and cutting-edge technical ideas and solutions, unequaled anywhere in the world; the weapon that is entitled to ensure sovereignty, security of Russia for decades to come,” he boasted.

“The possession of such technology by Russia is the most important, reliable guarantee of peace on the planet,” Putin continued. “And, no matter what, we’ll certainly keep improving this weaponry.”

Original reports from the August explosion stated that the eruption was caused by a faulty Zircon missile, one of Russia’s newest and most dangerous weapons of war. However, new reports suggest that the explosion was related to Russia’s hypersonic cruise missile 9M730 Burevestnik AKA SSC-X-9 Skyfall.

President Donald Trump speculated the explosion was related to the experimental Skyfall missile.

“The United States is learning much from the failed missile explosion in Russia,” the President tweeted on August 12. “We have similar, though more advanced, technology. The Russian ‘Skyfall’ explosion has people worried about the air around the facility, and far beyond. Not good!”

The United States is learning much from the failed missile explosion in Russia. We have similar, though more advanced, technology. The Russian “Skyfall” explosion has people worried about the air around the facility, and far beyond. Not good!

Russia never confirmed nor denied the allegations made by the POTUS. In Putin’s speech this week, he did not identify the weapon that he was referring to.

The Skyfall is a nuclear-powered intercontinental cruise missile that Moscow claims has unlimited range. Putin believes that the missile’s superiority will dissuade the United States from engaging in a nuclear war with Russia.

CNBC reported that the missile “will be ready for war within the next six years, a slightly accelerated timeline than previously reported, according to a U.S. intelligence assessment.”

The same report says that the Skyfall missile was “tested four times between November 2017 and February 2018, each resulting in a crash.” There was a partially-finished Burevestnik missile that had a successful test on January 29, 2019, in the Arkhangelsk region. Russia claims that it was the 13th test on the unconventional weapon.

The 9M730 Burevestnik missile has capabilities of the nuclear-powered and nuclear-tipped. Currently, there is no missile powered by nuclear energy in the world. Russia claims that its missile will also have unpredictable flight trajectory and be able to evade any any-missile defense or interceptors.