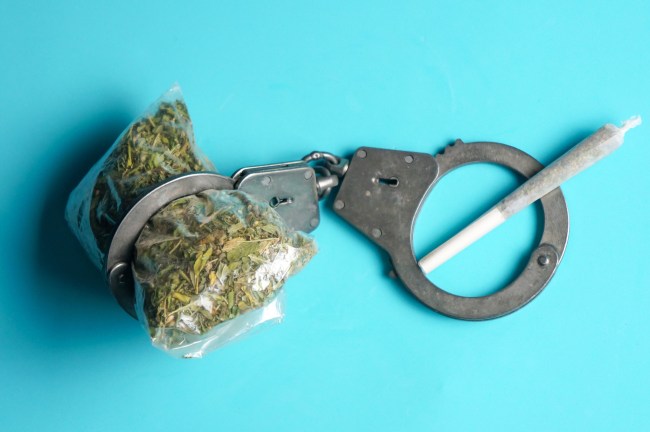 Want to win up to $5K for simply sharing an embarrassing story? Here’s how:

18-years-old. What a preposterous idiot I was back then. Maybe it was the simplicity of high school — wherein all that really mattered was hanging out with your buddies — that led to such recklessness. Or maybe it was the impending start of college and the knowledge that I was about to start a fresh life either way. Regardless of the reasons, I, like most of you, was an absolute shithead when I was 18-years-old, perhaps best epitomized by the time I got arrested for weed. The ganj. The devil’s lettuce. The sticky icky.

It was prom weekend, and here in New Jersey, that means a trip down the shore. People like to dunk on Jersey, sure, but having an easily accessible coastline, especially as a teenager, was a gift, particularly when it came to partying. You’ve heard of MTV’s Jersey Shore, haven’t you? Their infamous house was in Seaside Heights, which is the same town we landed in for prom weekend. The entire town is a cliche, with juicehead guidos, spray-tanned women, and fist-pump-filled nightclubs as far as the eye can see. And when you’re 18, that’s exactly what you’re looking for.

If memory serves me correctly, it was actually our first night at the house. Vibes were high and the music was blasting, when someone had the brilliant idea that we should smoke a blunt. “Brilliant idea!” I thought. “I’ve got a dutch in the car.”

So out to the car I went, but instead of returning inside our private shore house to do the rolling deed, I decided to plop myself in my car, put the windows down, turn up the music and start rolling up right there. Like I said, I was an idiot.

No more than 10-minutes later, a bicycle cop pulls up to my window, asking me what I’m doing here. It was a rhetorical question, as the weed-rolling-kit was literally in my lap, available for any and all to see.

Before I knew it, I was in the back of the car. For what it’s worth, the cop was nice enough — asking me where I’m from and what my plans for life were. The whole process, other than the financial and criminal aspect, was actually relatively painless — they brought me down to the station, booked me, and then actually drove me back to the storehouse themselves. Story over, right? Wrong.

In New Jersey, at least back then, getting caught with weed for the first time results in something called “conditional discharge”, which essentially means if you stay out of trouble for a year, the charges will be dropped. Spoiler alert: I did not stay out of trouble. And luckily for it, it didn’t matter.

Remember the Seaside Heights cop who took me into the station? He was a Rent-a-Cop (not a phrase I suggest actually using near a cop), which essentially means he was hired by the town to be a temporary police officer during the busy Summer season. And this Rent-a-Cop, as it turns out, wasn’t all that great of a guy, as he would later be arrested and charged for breaking and entering, therefore forcing all of his cases to be thrown out because he could not testify against the defendants, a.k.a., my dumbass.

So, what’s the moral of the story? Don’t smoke weed? Certainly not. No, the moral of the story is that for as dumb as you may be, there will always be someone dumber: luckily for me, that person just so happened to be the cop who arrested me. Wherever you are, random Seaside Heights Rent-a-Cop, I thank you. Also, please stop robbing people.

Do you have an embarrassing story to tell? You can win tons of money for doing so.

The folks at Vocal, a storytelling platform for creators (both current and future), is running its “(No) Regrets” Challenge encouraging people with embarrassing stories and confessions (like you!) to write them out in an effort to win three chunky cash prizes.

The Challenge is in conjunction with Vocal’s newest community, Confessions, where people write about their most traumatic, awkward, hilarious blunders. Do you have a cringeworthy first date story? Have you shown up to a job interview with the security tag still on your pants? Any brutal pandemic mask tales? Shit yourself in Harvard Square? Think about the story you told your friends that made them laugh, cry, cringe, etc. and WRITE IT DOWN.

Here are a couple examples of stories already submitted to the “(No) Regrets” Challenge:

In order to be eligible to enter the “(No) Regrets” Challenge, you must have a ​Vocal+​ ​membership, which grants Vocal creators access to exclusive Challenges, along with increased monetization opportunities, premium creation tools and features, and additional perks on the platform. You can sign up for ​Vocal here​, ​and then use the promo code ​BROBIBLE99 ​at checkout to receive your first month’s membership and participate in the Challenge for just $0.99.

(No) Regrets stories must be between 600 and 5,000 words and adhere to Vocal’s Community Guidelines. Only stories published on Vocal and entered into the contest up until April 27, 2021, at 11:59 PM EST will be entered for consideration.