West Virginia Couple Claims To Have Had Three Encounters With Bigfoot, Photographed The Creature 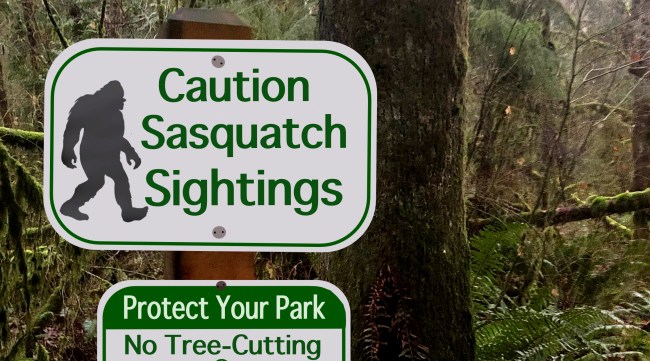 Just as the mystery of a Bigfoot sighting in the state of Washington was solved, along comes another report out of West Virginia in which a couple say they spotted the Sasquatch three times and even took a photograph of the mysterious creature.

According to a local news report, Billy Humphrey and his wife Sheena made their discovery after he set up a deer hunting blind on their property in Danese, West Virginia.

Humphrey, a former U.S. Marine, began his investigation after food that he’d put out to attract game had been devoured conspicuously fast on back-to-back nights.

“Everything was gone within hours – all of it,” he said. “I knew I had some raccoons, and we’ve got deer and bear, but whatever it was, it was eating everything, and I was determined to find out what was going on.”

So to sate his curiousity, and perhaps bag whatever animal was eating all his food, Humphrey spent parts of the next two night in the blind.

On his first night out there he spotted something, but he could only make out its silhouette due to a light that was illuminated behind the creature.

“I thought it was a bear because it was tall enough that it cast a shadow when it passed in front of the light, but the light was 9 feet up, so whatever it was, it was big,” Humphrey recalls.

The next night the same thing happened.

On the third night, he enlisted the help of his wife Sheena.

“I said, ‘Let’s just wait here till dark and see what happens.’ Well, we’d only been sitting there for about 15 minutes when it came back. We looked out, and Sheena says, calmly, ‘There he is.’ I said, ‘There who is?’ Bigfoot,’ she said.

Sheena’s calmness can be attributed to the fact that this wasn’t the first time she had encountered a Bigfoot. In fact, it was her third.

“The first time I saw one I was about 16 or 17 and riding in a car with my mother past Babcock State Park, and I looked to my left, and he was just standing there in the woods, plain as day,” she explained.

Billy Humphrey says he was able to snap a quick photo with his phone but did not have a better camera handy.

“Then he just turned and walked off. We heard him go through the laurel thicket, and then he made this sound like — have you ever heard a bear’s death moan? He went, like, “Whoooooooah!”

Following the sighting, Humphrey decided to steer clear of the blind for a month. When he did finally return, he says the blind was torn apart, “But not like a bear would tear it apart— looking for food.”

Also following their encounter, chickens started disappearing from the family farm, but not in the way one would think.

“I had 104 chickens, and then we realized we had 60,” Sheena said, “but there was no sign of them being killed — no blood or feathers.”

Billy admitted that prior to the sighting, “I one-hundred-percent didn’t believe in it, and I said that people who claimed they saw it were crazy.”

Now, however, he says, “It was massive, and about eight-and-a-half feet, I guess. Sheena went and stood where he’d been standing, and she’s about five-seven. In the picture, he’s actually standing so his lower half is over the hillside. The thing was huge. It had a cone head, and it was tan under the eyes and had a barrel chest. The original photo of bigfoot you see in the Patterson–Gimlin film — that’s what it looked like. It didn’t look like some of the other photos you see.”

(The picture Humphrey took an be viewed here.)

And now he feels bad for being such a skeptic, “I hate it because I’ve made fun of people like that — who had claimed to see these things.”