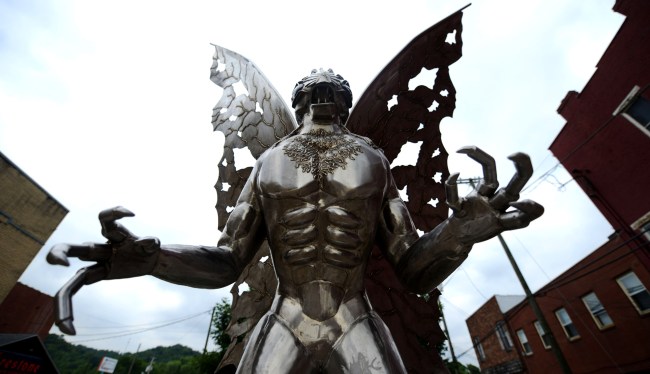 If you have played the video game Fallout 76 at any point in the past couple of years or have ever watched the film The Mothman Prophecies or read the book the movie was based upon then you are well versed in the Appalachian legend of Mothman.

If you haven’t, and don’t know what The Legend of the Mothman is, well… get ready to have some serious knowledge dropped on you.

Each year in Point Pleasant, West Virginia there is a festival commemorating the tale of the the Mothman that has been happening since 2002 and that draws thousands of people. Sadly, thanks to the pandemic, the event has been postponed to 2021.

Why do the residents of Point Pleasant celebrate the Mothman? Because from November 12, 1966, to December 15, 1967 the Mothman became national news following a report published in the Point Pleasant Register titled Couples See Man-Sized Bird … Creature … Something.

Check this out, from the Toronto Star…

The first sighting was reported on Nov. 15, 1966, by a group of people in an area of town known as TNT, the site of a former World War II munitions plant. Others said later that they’d seen a gray creature about two metres tall with bright red eyes and wings like a bird.

The sightings ended abruptly on Dec. 15, 1967, the day of the collapse of the Silver Bridge, which linked Point Pleasant to Ohio. Forty-six people were killed, and since then people have speculated the sightings were connected.

Local residents are so taken with this story that there is even a Mothman Museum.

So with all of that in mind, recent news that residents of West Virginia have begun campaigning, and even starting a petition, to get all of the state’s Confederate monuments replaced with Mothman statues makes absolutely perfect sense.

Tear down the Stonewall Jackson statue and replace it with another statue of West Virginia’s own mascot and son the Mothman. Repeat indefinitely until all Confederate monuments are replaced. This is the way. pic.twitter.com/MBzXZkRhAs

“We have certain stories, oddities and bizarre pockets of the state that are unique to our region, and we find a sense of comfort in sharing these things together,” explained local resident and teacher Jay Sisson explained to Mel magazine. “I don’t have a full explanation as to why, but it probably has something to do with the fact that we live in a state with a small population and one that’s suffered years of economic depression and population loss. These circumstances have bonded our population, especially the younger generation, very tightly together.”

For what it’s worth, in addition to the Mothman, West Virginia is also supposedly home to Sasquatch and the Flatwoods Monster, so they’ve really got a lot to celebrate down there in the Mountain State.

Reasons why mothman is better than the confederate statues:
1. Not racist
2. Not explicitly a symbol of white supremacy
3. Not a symbol of slavery
...
1007. Mothman has a thicker ass than any confederate general.

Hard to argue with rock solid logic like that.