What Is It That Makes Fear So Enjoyable? 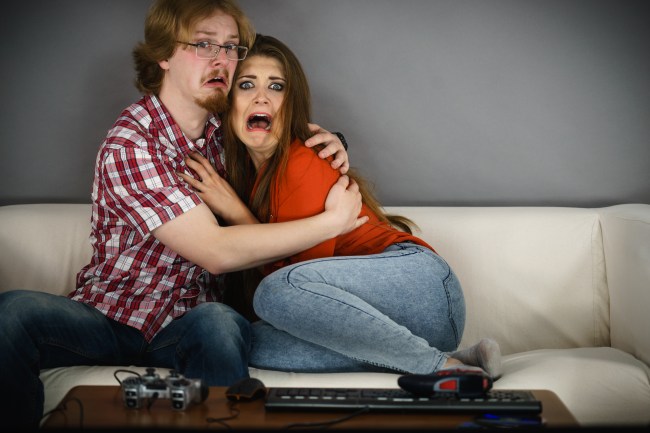 There are no two ways about it. We like being scared. No, it’s not that we’re into the kind of fright that comes with trying to figure out how we’re going to pay the rent this month or the terror of not knowing which chump is going to be president for the next four years, but we do seem to find some enjoyment in getting spooked. It’s the reason that so many of us like watching horror flicks or going to haunted houses. We are more than willing to hand over our hard-earned money in exchange for the adrenaline rush that comes with belting out blood-curdling screams. But have you ever stopped to consider why humanity is such a fear junky?

Well, it turns out that our desire for trepidation is just another complexity of being a dumb-dumb human. According to a recent paper from the journal Psychological Science, people seek out “recreational fear” because it gives them an emotional speedball effect that combines terror and pleasure. It’s not quite like getting a raging hard-on while wearing nipple clamps, but it’s pretty damn close.

However, there is a threshold.

“By investigating how humans derive pleasure from fear, we find that there seems to be a ‘sweet spot’ where enjoyment is maximized,” said study co-author Malmdorf Andersen at the Interacting Minds Center at Denmark’s Aarhus University. “Our study provides some of the first empirical evidence on the relationship between fear, enjoyment, and physical arousal in recreational forms of fear.”

To come to this conclusion, researchers strapped a bunch of people with heart-rate monitors and set them loose in a Dystopia-style haunted house in Denmark. The participants then encountered various scary interactions ranging from zombie attacks to getting chased by a man in a pig mask wielding a chainsaw. Even once the participants thought they had finally escaped the scourge, they were met outside by a pack of snarling undead. Cool, right?

Throughout the entire creepy affair, scientists measured the people’s reactions to impending doom (that feeling that something gnarly is about to happen) and those highly sought after jump scares – the kind of response that a person may have to a startling part in a movie. Although people enjoyed the experience, it was too much for some. On the other hand, some frights were not quite intense enough to provide a hardcore thrill. Oh yeah, and some of the participants were not counted. They either got too wrapped up in the overall experience or just hauled ass out of there. So not everyone was adequately assessed. Nevertheless, researchers believe that recreational fear is the most satisfying when there is balance.

“We know, for instance, that curiosity is often aroused when individuals have their expectations violated to a just-right degree, and several accounts of play stress the importance of just-right doses of uncertainty and surprise for explaining why play feels enjoyable,” said Anderson.

But measuring the correlation between fear and pleasure isn’t necessarily cut and dry. The best method of gauging it is by examining people’s facial expressions and body language. And since everyone is different, pinpointing the sweet spot for fear is tricky. What might cause one person to yell, “Hell Yeah!” could kill another from a heart attack. But “for now, understanding recreational horror as a form of play seems to be a fruitful approach to a longstanding paradox in the psychology of fear,” the research team concluded.