What Type of Music Does Guy Fieri Listen To While He Cooks? 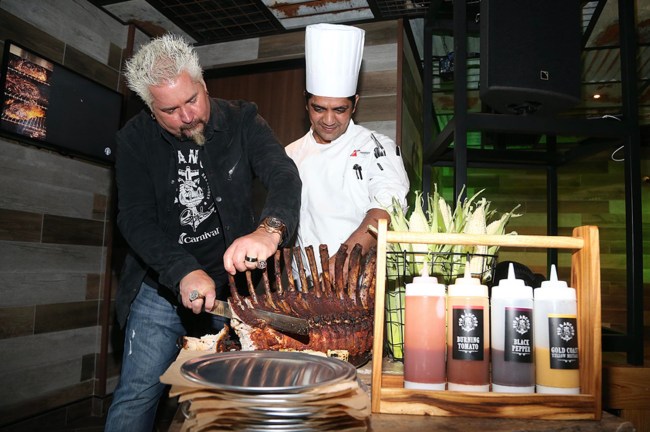 Since we like to do things a little differently here at BroBible (and we love music) we put together a list that’s decidedly in our wheelhouse: Guy Fieri’s Favorite Songs to Cook To.

A few weeks ago, I had the pleasure of touring the 4,008-passenger Carnival Panorama, Carnival Cruise Line’s newest ship and the first new-build for the West Coast in more than 20 years.

At the end of that tour, I was invited to sit down with the Mayor of Flavortown himself. During our conversation, which ranged from barbequing advice to his charity work in NorCal, I asked Guy what type of music he liked to listen to while he cooked.

His answers were as freewheeling and epic as the man himself. From Gypsy Kings to Tony Bennett, to NorCal native Metallica and the music of his nephew’s godfather (Phish), Guy’s answers to no surprise didn’t disappoint.

We love music at BroBible. We’re sometimes a jam band blog. What does Guy Fieri listen to when he cooks?

We’ve actually got a bet going about this.

I’m an Enya fan. I’ll even throw down with a little Los Tigres del Norte. I like old school hip hop. I can get down with some of the new school hip hop. My younger son Ryder likes to play games with me like, “Have you heard this one?”

So who did you think (I was going to say)?

I was actually going to say Metallica.

Love jam bands. So the drummer of Phish…

He’s the godfather of my nephew. Ironically enough.

In which @GuyFieri revels to @BroBible via @JRwilldoit that Fishman is Guy’s nephew’s godfather.

Full interview with The Admiral of Flavortown here: https://t.co/HZFVUyUCgj pic.twitter.com/r4PnstxCL1

Below is a Spotify playlist we put together of all of Guy Fieri’s favorites, aptly named The Admiral of Flavortown’s Favorite Food Tunes. Check out the entirety of my conversation with Guy here, and have a happy New Year!