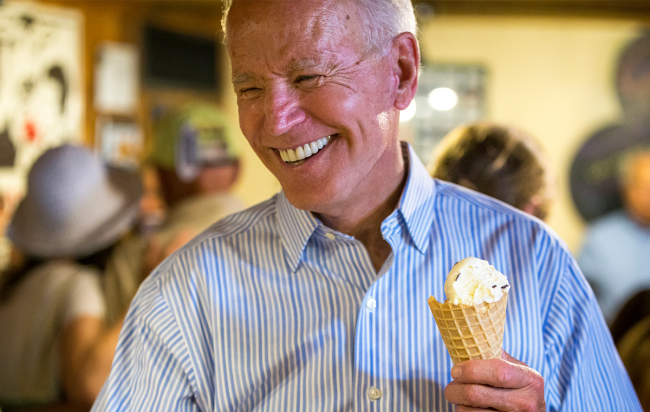 Joe Biden, who is now officially the 46th President of the United States, doesn’t just like ice cream. No, Joe Biden loves ice cream. While it’s impossible to know where it ranks compared to his affinity for aviator sunglasses, the state of Delaware, and riding Amtrak, the man’s love of frozen dairy treats seems to know no bounds.

It’s hard to imagine anyone who hasn’t been cursed with lactose intolerance would disagree with what I consider an objective fact: ice cream is fantastic. That’s one of the least controversial statements in existence, and if you somehow object to it, you’re basically telling me to disregard any opinion you have on any topic.

Considering his occupation, I assume Biden would be a little more diplomatic and understanding than myself if he encountered someone with that view. With that said, I can only imagine he’d be seething inside and suppressing the urge to tell you to cut the malarky and scram while raising both his fists and saying you you’ll have to deal with “Hammer” and “Nail” if you don’t beat it (it seems like when you reach a certain age, you’re required to give your clenched hands a nickname. I don’t know exactly how old you have to be, but I know I’m going with “Rock” and “Roll” whenever I get there so I can say “It’s time to face the music” when I put up my dukes).

Even if you try to stay out of the political fray, there’s a pretty good chance you’re aware Biden is a huge Ice Cream Guy based on the countless occasions where he’s been photographed absolutely demolishing a scoop or double-fisting some cones.

The smile on Biden’s face whenever there’s ice cream in his general vicinity is simply one of pure joy. Even the best politician in the world can’t fake that kind of unbridled enthusiasm. This may have something to do with the fact that it appears to be one of his only vices, as back in 2016, he said, “I don’t drink. I don’t smoke. But I eat a lot of ice cream.”

Last spring, we learned Biden’s campaign had spent more than $10,000 on ice cream (although it’s not clear how much of its consumption he was personally responsible for) and I can’t even imagine how much that number rose once the warmer part of the year rolled around. Sure, the pandemic might have prevented him from crushing soft serve at county fairs around the country, but I have a hard time believing he didn’t have an aide run out to grab him a Blizzard whenever he needed a fix.

If that picture doesn’t give you flashbacks to sitting on a curb after a Little League game when you were a kid, you were seriously deprived as a child.

As universally beloved as ice cream might be, I’m not going to sit here and act like it’s not capable of driving a wedge between people, as—much like everyone has an opinion about how The Sopranos ended and whether LeBron James or Michael Jordan should be considered the G.O.A.T.—the topic of the best flavor of ice cream can be an incredibly divisive one.

This controversial issue was highlighted in a survey that was conducted last year where 20,000 Americans were asked to pick their ice cream of choice. Chocolate came away with the win after garnering 17% of the vote while vanilla (always a bridesmaid but never a bride) earned the silver medal with 15%. We also had a few third-party candidates that had a respectable showing, as strawberry, mint chocolate chip, and butter pecan all came away with 8%.

I have Some Thoughts on butter pecan somehow being as popular as it is, and while I assume Biden is a member of the age demographic responsible for its strong showing, the general consensus seems to be that his flavor of choice is chocolate chip (he’s also said to enjoy the Salted Peanut Butter with Chocolate Flecks option made by the Ohio-based Jeni’s Splendid Ice Creams, which recently released White House Chocolate Chip, a vanilla bean ice cream with chocolate-covered waffle cone pieces and chocolate flakes. Sure, being President of the United States is cool, but as far as I’m concerned, getting your very own ice cream is the ultimate life goal).

Chocolate chip is certainly a solid choice, and while I’m trying to be as apolitical as I possibly can considering the man at the center of this article, it’s good to know our Commander in Chief also has a go-to alternative. That’s a veteran move that demonstrates the strong decision-making and judgment we should covet in a world leader. Backup plans are important, and it’s good to know Biden understands that.

I’ve been trying to figure out why I enjoy Joe Biden’s love of ice cream almost as much as Joe Biden enjoys eating it, as it’s an admittedly weird obsession to have. I think a major factor is that his relationship with his favorite guilty pleasure seems so real. Could it simply be one aspect of a carefully orchestrated plan to make him seem relatable to the average American? I mean, sure, but if that’s the case, he deserves an Oscar for making his infatuation for it seem so genuine.

Will Joe Biden be a good president? I don’t know. You don’t know. Nobody knows. But what I do know is that Joe Biden loves him some ice cream, and regardless of what transpires over the course of his term, I can only hope it results in us being treated to more photos of him absolutely going to town on a waffle cone.