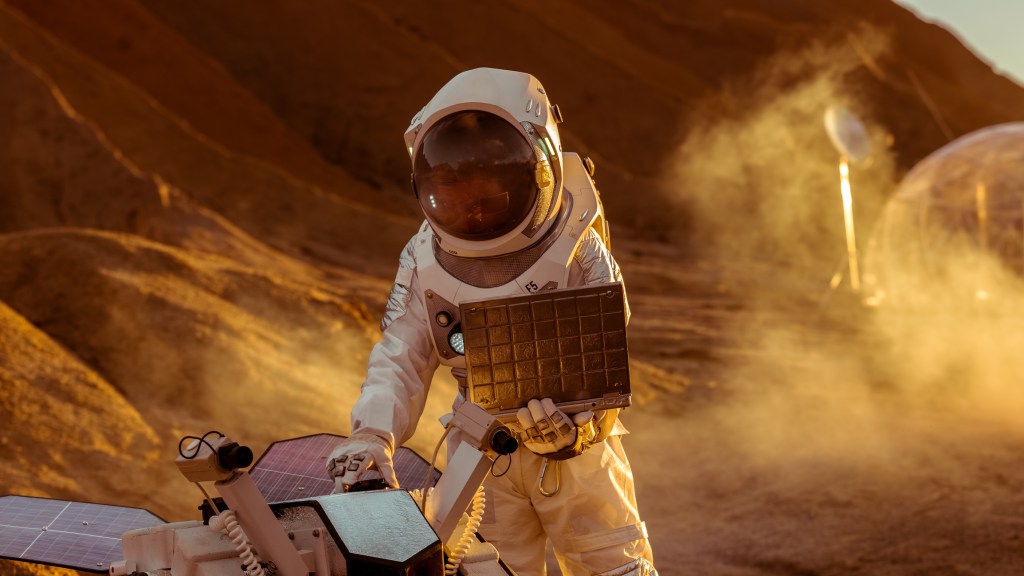 It was David Bowie who once begged the question, “Is there life on Mars?” For decades, earth humans have had a fascination with finding kinship on the Red Planet, as if there is some mysterious force calling us home. And strangely enough, that could be precisely what’s going on.

Scientists now theorize that mankind may have evolved from dust and space smegma from the Martian atmosphere. It’s possible, or at least they say, that Earth is just a planetary reproduction of this otherworldly desert and that we’re presently living in the favorable conditions that it once enjoyed. Perhaps this conjecture is what stuck a hot poker up the crack of NASA and got the elite of the American space geek hellbent on finding creepy crawlers on Mars. The agency recently landed its rover Perseverance on this wasted world in an attempt to “sift the sands of time.” They hope to find evidence that there were, in fact, once critters on Mars and maybe start to get a grip on whether humans could ever inhabit it if Earth goes to hell in a handbasket.

Why the space community is so dedicated to Mars becoming a new home for humanity is beyond me. It’s colder than a witch’s tit up there! The average temperature is somewhere in the neighborhood of negative 80 degrees Fahrenheit. That’s like being stuck in some of the most frigid parts of the world where the sun never seems to shine and sheer, suicidal misery is the symptom of the day – every stinking day of the week. Mars is basically doomsday in red. There’s relatively no oxygen and beer is nonexistent.

Nuh-uh, forget it. Living there would be a lot like boxing a large Kamchatka bear in the dead of a Siberian winter before being doused with a bucket of ice water and rattlesnakes. To make matters worse, a year on Mars is nearly double what it is on Earth. We’d like to tell you that means there’s a longer boating season, but sadly that isn’t the case.

Seriously, going to Mars spells death – and a pretty darn quick one at that. Despite this spot in the galaxy being all the rage among wanna-be space travelers, new research finds that most life cannot withstand the seven-month-long trip through the harsh, unrelenting tides of the universe, much less the planet’s shifty conditions.

Hell, think about it. Texas got hit with ice and snow last week and the state nearly imploded and started eating their young. They couldn’t figure out how to keep the power on and how to clean their drinking water. Some residents even died from carbon monoxide poisoning because they thought that using their cars to stay warm in a closed garage was a good idea. We’re not exactly dealing with mega-brainiacs and tough-as-nails survivalists down here. We are soft! So what makes anyone think we are ready to colonize Mars?

According to a study in Nature Communications Earth and Environment, only spores from black mold, something else that is harmful to human health, seem to withstand the jolt of this long journey.

“We successfully tested a new way of exposing bacteria and fungi to Mars-like conditions by using a scientific balloon to fly our experimental equipment up to Earth’s stratosphere,” said Marta Filipa Cortesão, co-author of a study from the German Aerospace Center. “Some microbes, in particular spores from the black mold fungus, were able to survive the trip, even when exposed to very high UV radiation.”

Researchers are concerned that manned-missions to Mars could eventually end in catastrophe if these pesky microbes happen to get the upper hand. On the flip side, they also say they could help Martian civilizations produce food and other essential material necessary for continued survival. But unless these bacteria can manufacture really warm coats, oxygen and beer, I’m still out on this one, fellas.

I’m not convinced that making a 2.4 million-mile trek through the dark emptiness that is space is the key to perpetuating our species. No sir, all of this “let’s catapult through space and hang out on Mars” is just overly-ambitious jibber jabber spewing from the mouths of space hard-ons who used to dream about riding rockets when they were 10-years-old.

Meanwhile, we have a perfectly good planet to call home already. It is one we can still breathe in for the moment, and the temperatures often get warm enough to walk around half-naked. No, this place isn’t perfect, but even with all of its faults – most of which were caused by dumb-dumb humans – it is still a heck of a lot better, safer, and sound than rebuilding life on the cold-ass abandon.

Take a look at history. Pioneers often dropped dead while migrating west because they got sick, and their bodies weren’t even compromised like they would be under the pressures of Mars. If there was once life on the Red Planet, it had its time. There’s a reason it died and became uninhabitable. Listen, I’m not trying to get all hippy-dippy here, but perhaps investing billions of dollars in to salvaging THIS planet would be more conducive to preserving life than dropping it on a wad of terrestrial remains. All I know is, if Mars is our only hope, we’re all screwed.