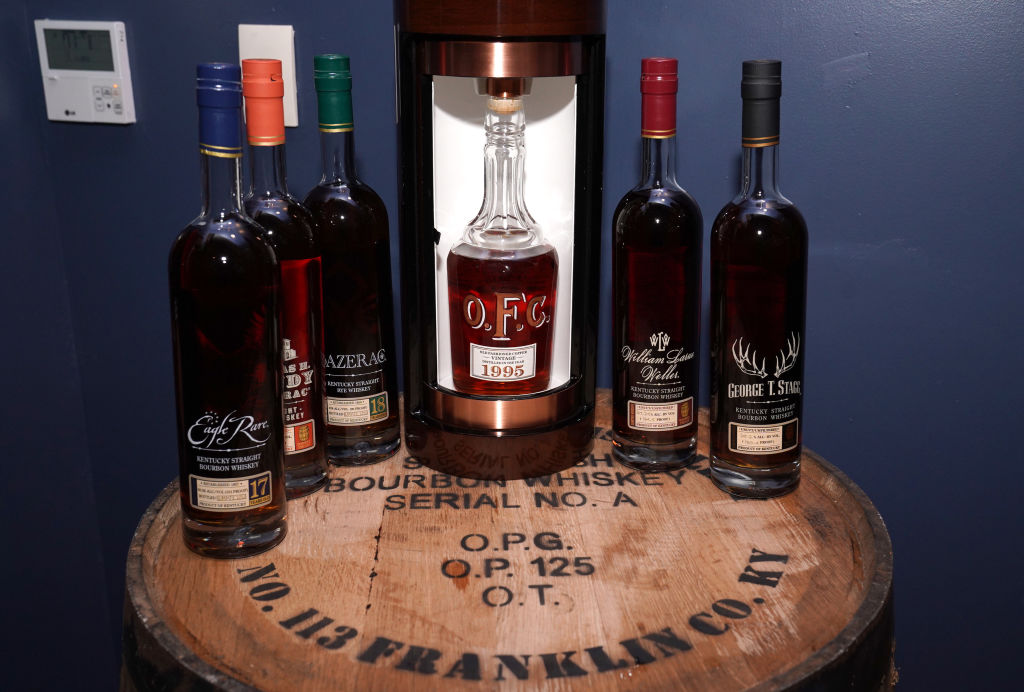 One of the rarest bourbons in America just got even harder to find. Harder and significantly more expensive on the secondary market. That sound you hear? That’s the sound of bourbon bars worldwide jacking up their prices on George T. Stagg after the Buffalo Trace Distillery announced they wouldn’t be releasing a new George T. Stagg this year.

A bottle of George T. Stagg bourbon has an SRP of $99 but 99.999% of the whiskey-drinking world will never find it at that price. Hop on over to Google and search ‘how much does George T. Stagg cost?’ and the top listings are two bottles selling for $999.

The first article in that Google search is a thread on Reddit from November 2020 with many suggesting bottles can be found at $200. Some people claim they paid $350-$400, one guy says his shop had it for sale for $500. THe point here is a $99 suggested retail price is a figment of everyone’s imagination unless they’re fortunate enough to be at the right place at the right time.

And the real kicker here is it’s worth every penny! There are just a handful of Kentucky Bourbons on the market that I’d earnestly suggest breaking the bank for and this is one of them.

So the billion-dollar question is why isn’t Buffalo Trace Distillery going to release George T. Stagg this year when it’s evidently one of the hottest product releases on the planet? They have a great answer to that question: this year’s whiskey didn’t meet their incredibly high standard and they didn’t want to release anything that would be sub-par.

This year’s release was meant to be a 14-year-old unfiltered barrel-proof George T. Stagg, whiskey that was distilled and barreled all the way back in 2006. Buffalo Trace master distiller Drew Mayville told Robert Simonson at the NYT “It just didn’t look right. It didn’t match the taste profile we expect from Stagg.”

George T. Stagg has a very distinct flavor profile, aroma, and color. There should be smooth notes of “dark chocolate, leather and dark cherries” and the whiskey should have a dark, rich color. Buffalo Trace master distiller Drew Mayville says when they went to taste the 2021 George T. Stagg release the “was too light and undeveloped in character to represent the Stagg brand.” And they’ve yet to determine the reason why which will certainly raise some eyebrows around the Kentucky bourbon world.

The 2006 George T. Stagg barrels will now be monitored to see how they progress. It’s quite possible the color deepens and the flavor unlocks. It’s also possible that something in the past 14 years went wrong and they’ll need to identify that as well. There was a brief time when they considered using 2007 barrels but that would’ve broken with tradition.

It’s hard to overstate how glad I am that I’ll never be in a position to make the decision to skip a year. This will cost the Buffalo Trace Distillery millions in sales. The flip side of that is by the time Buffalo Trace releases George T. Stagg in 2022 the whiskey world will be desperate for a sip, a pour, for anything. Next year’s release will likely rival the annual Pappy hype.

George T. Stagg is already incredibly difficult to find. A year without it is going to truly test the wills of bourbon lovers. By this time next year, guys will be camping out for a week to get a bottle. I can’t wait to see it happen.