We May Finally Know Why Bacardi 151 Was Discontinued 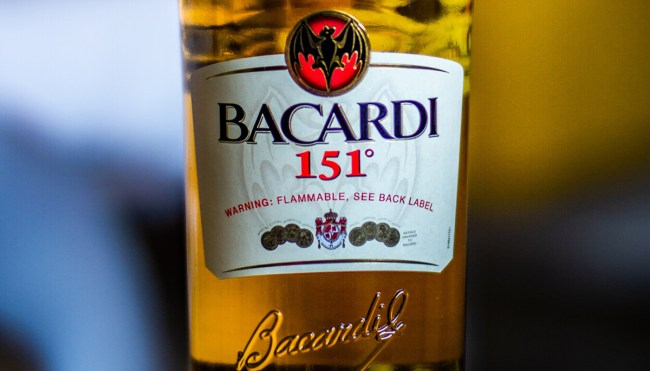 If you went to college prior to 2016, there’s a very good chance you had at least one encounter with Bacardi 151, the infamous rum that long served as the Unofficial Drink of Making Memories You’ll End Up Forgetting.

For the uninitiated, the “151” in the name was a reference to the proof of a spirit that clocked in at 75.5% ABV, which meant a bottle contained almost twice as much alcohol as you’d find in a fifth of the brand’s flagship offering (which boast the relatively modest 80 proof that serves as the baseline for many other clear liquors).

Bacardi 151 was just one of many “overproof” rums that are still on the market, a category defined by the 100-proof threshold that makes them particularly conducive for “flaming” shots and cocktails (as well as dishes like Bananas Foster) where the fiery presentation is a major part of the appeal.

Now, Bacardi 151 may have featured a label that stated it should not be used for “flaming dishes or other drinks.”

However, anyone who spent countless hours watching YouTube videos of people lighting themselves on fire while trying to rip a flaming shot knows that warning was soundly ignored by many consumers (that wasn’t the only way it could be abused—as evidenced by a roommate I once had whose pregaming ritual involved opening up a snack-sized container of the Pringles he relied on to chase each of the shots of 151 he lined up and ripped before heading out).

Bacardi 151 disappeared from shelves after it was quietly discontinued in 2016, and while the brand has never provided an official explanation for its decision to cease production, most people assumed fire-related lawsuits were the primary culprit—and now, we may finally be able to confirm that’s the case.

The “proof” for the explanation concerning the demise of the overproof rum comes courtesy of baseball writer Whitney McIntosh, who recently went viral after relaying the response to a question raised by a woman on a tour of the Bacardi distillery in Puerto Rico.

It would appear lawsuits were indeed the primary factor, as McIntosh says the tour guide candidly admitted they kept getting sued by people who set themselves on fire.

It’s unclear if this is Bacardi’s official stance, and while I reached out to the brand via multiple outlets in search of a statement either confirming or denying this is indeed the reason we now live in a world without 151, I did not receive a response.

This post will be updated if that ultimately changes, but for now, this seems to be the most authoritative explanation we’ll get.