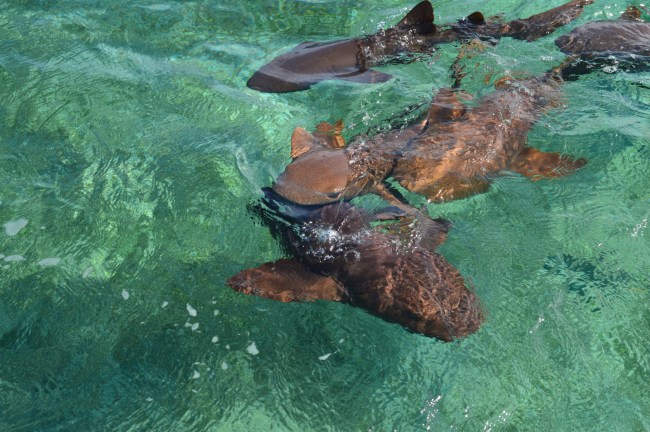 There are places throughout the world where you can hand-feed sharks. I’ve been to a spot in The Exumas in The Bahamas were nurse sharks congregate in huge numbers. We’re talking like 50 sharks sitting around at a time. And when the fishermen roll in with the daily catch to fillet the fish on the docks the sharks get the scraps, and over time these sharks became quasi-domesticated so you can actually hang a fish off the dock and hand feed them if you’re careful….Key words: if you’re careful.

This woman in Australia tried to hand feed a shark and ended up paying the price. She suffered a torn ligament and a fracture after getting waaaaayyyyyyyy too close to the shark while trying to feed it. All things considered, she’s fine now. She was attacked by a shark and it was caught on camera, and she’s now a cautionary tale to anyone who tries to stick their hand underneath a shark’s mouth while feeding it:

Since this is in the news lately: sharks are the very definition of Big Dick Energy. Nothing in the ocean can challenge sharks. The only predators sharks have are other sharks (and humans). They swim around with the swagger of knowing they’re in charge. Henceforth, if anyone asks you to describe what Big Dick Energy means and you’re struggling to come up with a suitable definition you could either Google an answer for them or you could explain how sharks are the living embodiment of BDE.