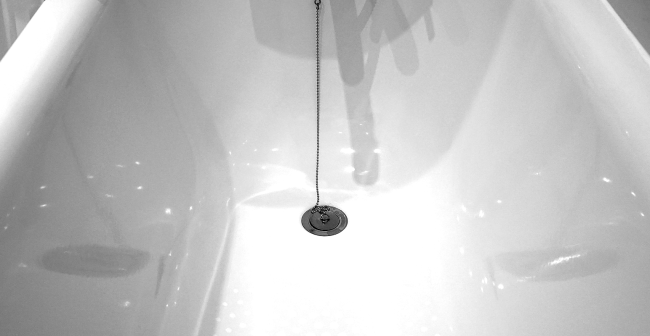 Here’s something you don’t see every day. Or ever. A woman named Shevi Reback shared multiple images to a Facebook group called Things Found In Walls last week which showed a creepy bright light showing up through the drain in her hotel bathtub.

“I’m in a hotel and I just noticed that the bath drain has a light coming from it. What could it be?” she asked.

“That’s clearly a portal to hell,” one woman replied.

“That’s the pipe that leads to the mains water in hell,” echoed another commenter. “When the tortured souls get super dehydrated the demons let them drink people’s dirty bathwater.”

Why is this 'creepy' light shining out of a woman's bathtub drain? https://t.co/LJjkrFh2CK pic.twitter.com/ntpH1i2JII

As creepy as that is, after thousands of views and a plethora of similar comments the mystery may have been solved. Key words here: may have been.

“Most hotels have a chase between the rooms where all the mechanical systems are exposed so they can be maintained,” one commenter speculated. “If the trap in the tub is plastic and the maintenance person left the light in the chase on, it will be visible in your room. That’s probably what’s happening here.”

Another reader seconded this hypothesis, writing, “I’ve done maintenance in a few hotels. A lot of them have a ‘wet wall,’ the bathrooms all back up to each other with a service corridor down the middle. Someone left the light on lol.”

Has this ever happened to you? Because I’ve stayed in dozens of hotels and I have NEVER seen a light glowing in my bathtub drain.

Also, even if they are right about there being a corridor underneath the tub for maintenance to do work how does light get into the drain? The drain should lead to another pipe and never see the light of day. Drain pipes are sealed water tight, so, how does light possibly get into one? Something very strange is happening here despite a few semi-plausible explanations.

Regardless of whether they are right or wrong in their speculation, as one wise person advised on their Facebook comment, “If someone down there asks if you’d like a balloon, just say no.”