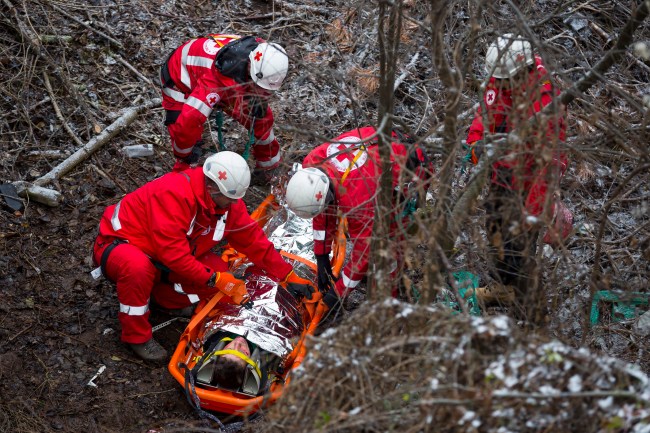 Getting away from the hustle and bustle of the city is often the main attraction of hiking but that can also be the most dangerous aspect of hitting the trails. If something goes wrong while hiking and a hiker needs to be rescued they’re often in isolated and hard to reach spots for rescuers.

A 74-year-old woman was injured yesterday on Phoenix, Arizona’s Piestewa Peak and had to be rescued by helicopter and flown out to safety. The 74-year-old’s rescue was captured on camera by a news helicopter filming the incident go down and this video has already become the most viral clip of 2019 with almost 9 million views in under 24-hours.

Phoenix Fire Department Captain Rob McDade told FOX10 “Firefighters made patient contact and decided that the best course of action was to fly the patient off the mountain.” And this is where everything went to shit.

She started spinning out of control. She lived. As far as we know, she’s fine and recovering from her injury. But if this was me I’d have thrown up all over myself, passed out, woken up, shit myself, thrown up on myself again, and then probably died.

Here is the original clip. Watch the ENTIRE thing because it only gets more insane by the second. She’s spinning exponentially faster than anything I’ve ever seen at a State Fair.

Feels like that scene in The Sandlot when everyone blows chunks after throwing in huge lips pic.twitter.com/dPkDj9Kipm

They claim ‘air turbulence from the helicopter’s rotor’ is what caused this 74-year-old injured woman to spin out of control. After the rescue, she was transported to a trauma center in the Phoenix area for treatment. Apparently, this is a well-known phenomenon in the rescue industry and there was a line that was supposed to prevent the spinning but didn’t work for whatever reason, according to FOX 10.

Naturally, there were a shit ton of remixes of this video with people adding music to this clip that’s been viewed almost 9 million times in under 24 hours.

Poor helicopter had to be life flighted pic.twitter.com/QU1qWMjrNq

I'm going to hell for this one pic.twitter.com/BfsLz9hsnJ

And was summarily spun to death upon being rescued.

This was my favorite part about the entire situation, this clarification:

This wasn’t the question I wanted answered pic.twitter.com/cDgeonKVEH

I’m glad to know someone felt the need to include that portion as if there was any evidence in this video whatsoever that a firefighter might’ve been injured. That’s all what we were wondering. Definitely not wondering how this lady was spinning in circles at the speed of light.

For more on this story, you can visit Fox 10 Phoenix.