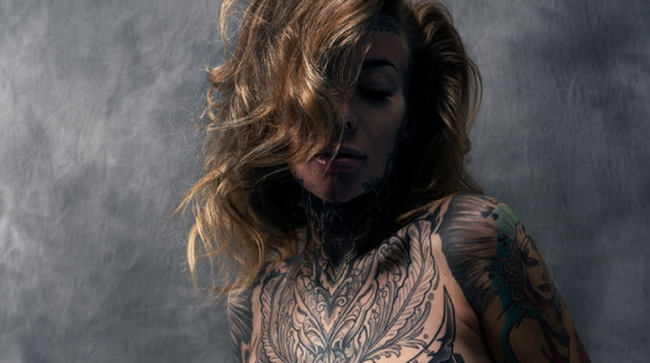 Becky Holt from Cheshire in the United Kingdom has been called “Britain’s Most Tattooed Woman” since approximately 95 percent of her body is covered with ink.

That is a big part of the appeal for the 33-year-old model’s fifty thousand plus followers on Instagram.

However, considering the fact that she recently became a mother and has gone to work as an interior designer, Holt was given a “mumsy” makeover to match her new lifestyle – for one day.

“The reaction I get in the public is mixed,” Holt tells Truly. “People say that I’ve ruined myself. That I’ve made a big mistake and don’t look ladylike.”

The transformation was performed by a professional makeup artist using a thick foundation to cover up all of her visible tattoos.

To complete the look, Holt attired herself in the look of the average “mum” – a white top and some mom jeans.

Her first reaction to seeing herself in a mirror was not one of great joy.

“I just think that I look better with tattoos,” she says. “I don’t recognize that person in the mirror.”

Then, when she reveals her new look to a couple of her best friends Toby and Jay, their reaction was understandably one of disbelief.

“I’m definitely confident with my tattoos,” says Holt. “I think without them, I wouldn’t be who I am today. I’m never, ever covering them up again.”

This wasn’t the first time Holt has covered up her tattoos, however.

Back in 2018, she took part in a social experiment to see how differently people would treat her if she covered up the tattoos on her face and neck.