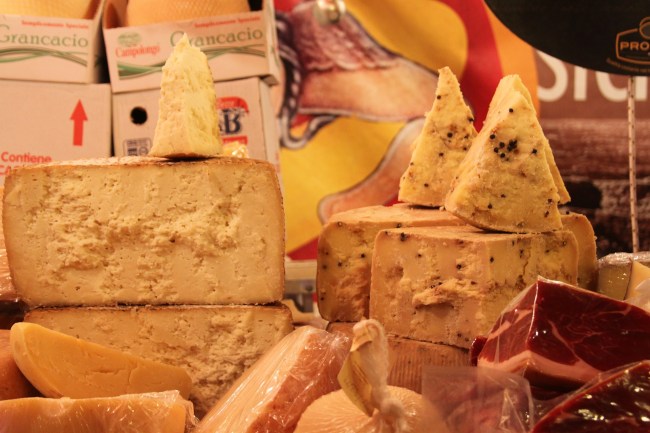 I love cheese. I thank my Lucky Stars and Stripes that I wasn’t stricken with a dairy intolerance like some sort of weakling. I’ve often been known to forego a traditional dessert at the steakhouse in favor of ordering a glorious cheese plate because that really is the best way to finish a meal. People don’t tell you this when you’re younger but it is, the best way to wrap up a great meal is with some rare cheese and honey

There have only been a few times in my life when I’ve turned down a cheese because it’s too stanky but it’s happened. I’ll admit it. I’m not proud of having to cede dominance to stinky cheese but I’m man enough to admit it. Everyone has their limits and I have mine which is probably about 244 cheeses less than what’s found on this Guinness World Record-setting pizza for the most varieties of cheese.

This record was set back on February 22nd but Guinness World Records shared a video of it on their Facebook page and all I can think about is how heinous it must smell. With that many kinds of cheese being used there are certainly some noxious ones in there and this has to smell like a burrito stuffed with baby diapers that’s been drizzled in tuna salad and left out to bake in the Sonoran Desert.

Here’s that pizza with 254 different kinds of cheese (via Facebook):

One aspect of this Guinness World Record that pisses me off is that they don’t even tell us which cheese are included. The record was set by Benoit Bruel in Lyon, France which is a centrally located city in Europe with access to countless regional cheeses we wouldn’t find here in America, just another reason I’d like to see a list of what nasty a** cheeses were used.

It’s also kind of funny that each cheese had to be weighed before it was included in the pizza as if our eyes were lying to us and we couldn’t see them dropping all of those cheese varieties into the pie.

For real though, this has to smell from a mile away. This pizza probably put off more odor than a garbage truck baking in the Arizona sun on the first garbage day after Thanksgiving, packed full of turkey carcasses and putrid leftover Thanksgiving scraps. There’s simply NO POSSIBLE WAY that pizza didn’t smell horrendous. I’d wager that any pizza with over 25 cheeses would smell bad and it would get significantly worse after that.