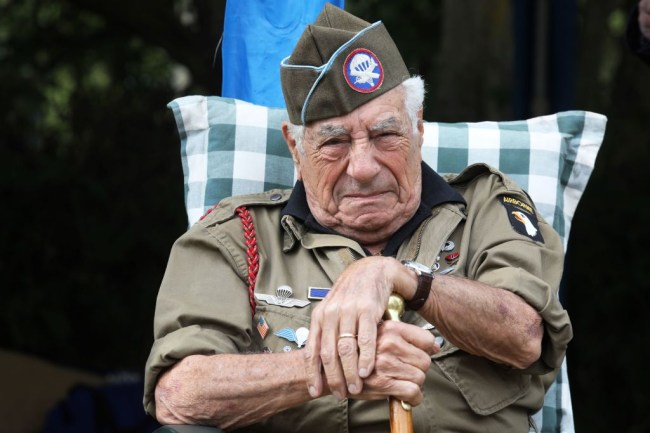 Editor’s note: In honor of Veteran’s Day today, I’m republishing this awesome story from former US paratrooper, Vincent Speranza. A very sincere Thank You from all of us at BroBible to all who served in conflicts past and present to make the United States of America pretty damn great.

At 19, Vincent Speranza was assigned to the 101st Airborne Division’s 501st Parachute Infantry Regiment. The paratrooper fought in a foxhole in Bastogne, Belgium, surrounded by German troops and artillery after an invasion known as Operation Market-Garden. A coupe days into the Siege of Bastogne, Speranza tracked down a wounded buddy in a bombed out church that the 501 used as hospital. Stripes.com tells the rest:

On the second day of the siege, a friend named Joe Willis was wounded with shrapnel in both legs and brought to a makeshift combat hospital in a blown-out church. When Speranza tracked him down, the fellow paratrooper asked him to get him something to drink.

Speranza explained they were surrounded and no supplies were coming in. The soldier asked him to check a devastated tavern nearby.

Speranza found a working beer tap there. He filled his helmet — the same one he had used as a foxhole toilet — and made two trips to the wounded in the church. He was caught by an angry major and told he would be shot if he did not stop, for fear he would kill the wounded.

At the age of 88, the WWII went back in 2009 and was pleasantly surprised to find out that they still serve beer in ceramic helmets there in his honor, according to Stripes.

Listen to Speranza explain the story in the video above.

Semi-related: A few years ago, on Veterans Day, PBR made a fantastic documentary about “The Greatest Beer Run Of All Time.” It’s an amazing story about an eccentric Bro from New York hopping ship to Vietnam in the ’70s to deliver a bunch of beers to his buddies deployed near Vietcong lines. Our post about it went viral on Reddit last night, which inspired this post.