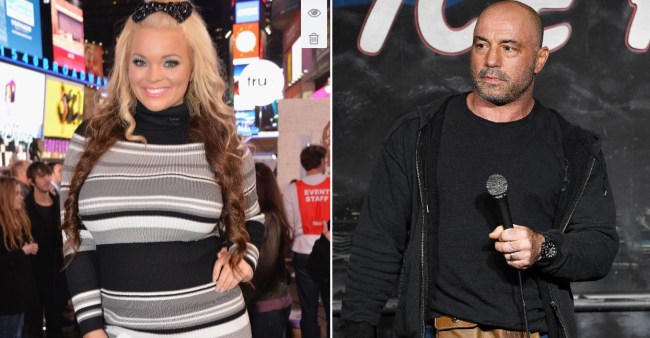 Internet personality Trisha Paytas has a bone to pick with Joe Rogan.

Earlier this week, JRE podcast guest Ali Macofsky mentioned Paytas’ OnlyFans page to Rogan during a conversation which led him to ask his staff to pull up a bikini pic of Paytas so he could check out her body. When he saw the bikini pic he quipped “you can keep that.”

WHO COULD'VE SEEN THIS COMING: Joe Rogan discusses Trisha Paytas on his podcast. He's told by his guest Ali Macofsky that Trisha has OnlyFans, so he asks to see pic of Trisha in bikini so he can "see how she would look naked." Joe responds to picture saying "You can keep that." pic.twitter.com/c9rDmDwnJd

Paytas, who is known for speaking her mind, saw the clip of Rogan mocking her and went scorched earth on the podcast host. In her response, Paytas blasted Rogan for radiating “small dick energy” and called him out for not being as smart as people make him out to be after his seeing his rude comment about her.

CLAP BACK: Trisha Paytas responds to Joe Rogan saying "You can keep that" after seeing pic of Trisha in bikini. Trisha says "This has been a pattern. Old, conventionally unattractive men … radiate small dick energy. And once again, not a diss, a lot of people like small dicks." pic.twitter.com/PmGeLxyvrL

There’s a lot to come at me for… but to look at a photo of me in a bikini and going”ugh you can keep that” why? I have heard Joe Rogan is highly intelligent…Honestly, I look at that and I’m like he has no intellect whatsoever, he can’t up with a wittier quip and you know if I’m not your type, you don’t have to say anything

It is pretty dickish of Rogan to randomly take a shot at Paytas’ appearance for no reason whatsoever.

You can view Paytas’ entire response to Rogan on her YouTube page below.