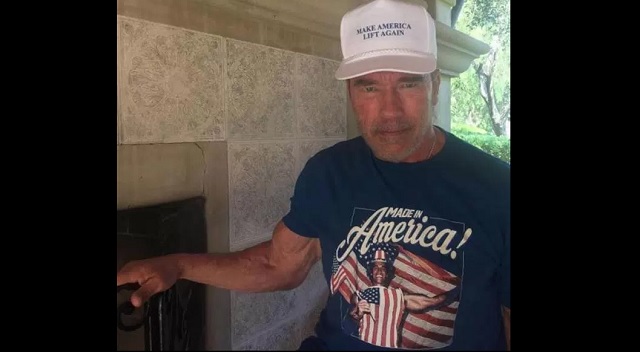 The beef between Arnold Schwarzenegger and Donald Trump has a taken a new level of absurdity.

Last week, President Trump took a shot at the former governor of California at the National Prayer breakfast for his abysmal “Apprentice” ratings.

Pres. Trump talks about The Apprentice at National Prayer Breakfast: "I want to just pray for Arnold if we can, for those ratings." pic.twitter.com/0oBhB82n6c

Schwarzenegger proceeded to fire back with this video.

Please study this quote from Lincoln's inaugural, @realDonaldTrump. It inspired me every day I was Governor, and I hope it inspires you. pic.twitter.com/QRoOFTZfQ9

In an interview with Men’s Journal, Arnold recounts that he once considered “smashing Trump’s face into a table” after the President tweeted mocked him Twitter about the Apprentice’s opening night ratings.

“I said, ‘Let’s sit on it for an hour. I called my assistant and said, ‘I think what we really should do is request a meeting and go back to New York.’ ” He pauses for maximum impact. “And then we just smash his face into the table.”

Alright Arnold no need to go all Terminator on the President.