Ben Stiller, Vince Vaughn, And The ‘Dodgeball’ Cast Are Reuniting For One More Epic Game 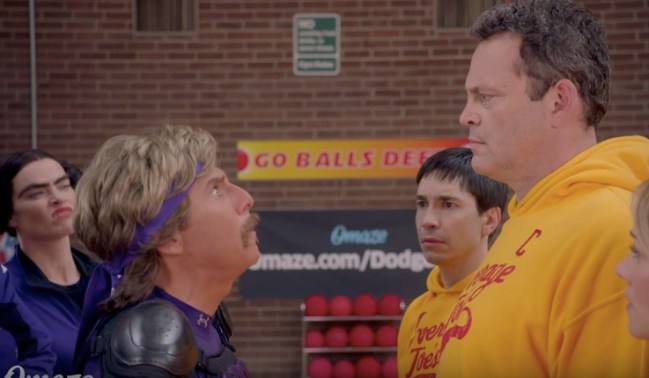 Ben Stiller, Vince Vaughn, Justin Long, and Ben Stiller’s (soon-to-be ex-wife) Christine Taylor are reuniting for one more epic game of dodgeball. The cast of Dodgeball (2004) are getting the band back together in the name of charity, and you, YES YOU, have a shot at playing dodgeball for Team Globo Gym or Team Average Joe’s.

Frankly, I’m confused on how there are two separate teams here when we all know that the movie ended with Vince Vaughn betting all of their Vegas winnings on Average Joe’s winning the championship. With that money, he was then able to acquire a majority shareholder position in Globo Gym and turn it into Average Joe’s, but I digress.

The cast of Dodgeball is working with Omaze, a charity organization that puts together larger-than-life stunts all in the name of charity. If the name Omaze sounds familiar it’s because you probably recall their campaign with Arnold Schwarzenegger from the Summer of 2015, back when they were offering up the chance to ‘blow shit up’ with Arnold.

This time around, Omaze will be holding a dodgeball competition to raise money for Ben Stiller‘s personal charity foundation. You can see a full overview of the program HERE on Omaze’s website, but here’s a quick preview:

Ben Stiller wants you to grab a ball. Join Team Globo Gym—or Average Joe’s, if losing is your thing—as they face off on the dodgeball court for one final showdown. Strap on your kneepads, hike up your shorts and put on your sweatband. It’s rematch time and you’re on the squad. Goodman and the guys will train you to throw wrenches and dodge blindfolded with the best. The competition is fierce this time and you’re going to need to step it up. Get outfitted in custom-made team t-shirts and let the balls fly. After the game (aka, after the Purple Cobras dominate), you’ll take a team photo together so you can remember the time you crushed Average Joe’s once and for all. Then, you and Ben will grab some pizza to celebrate. Flights and hotel are on us.

The winner will be flown to Los Angeles, put up in a 4-star hotel, and will play in a dodgeball game with the cast of Dodgeball. Afterward, they’ll hang out with the cast and eat pizza. If this sounds like something you’re at all interested in you can find more details HERE on Omaze’s website.