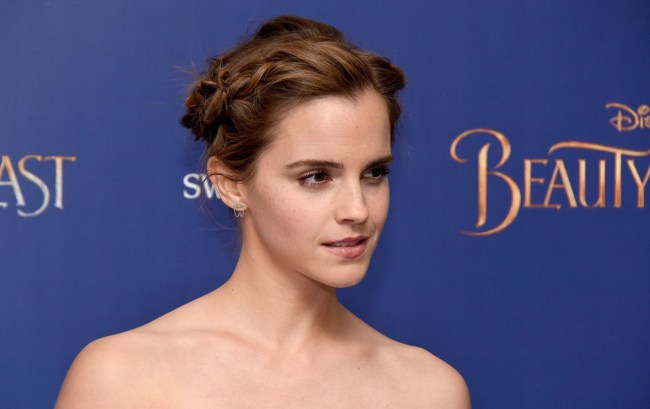 I used to be a fan of Emma Watson because she’s pretty and a good actress. Now I think I am a fan of hers because she has almost no filter with regard to what she is willing to say.

Last year she was more than happy to discuss how she subscribes to a “sexual pleasure website” and then this past weekend she had an excellent response to haters shaming her for posing semi-topless using words I didn’t ever imagine coming out of her mouth.

Now, in a new interview with Into The Gloss, Watson went full TMI again by sharing her grooming habits and let’s just say that they are rather unique.

I have a bath every single day of my life. And if I can have two or three—amazing. Nothing terrible is going to happen in the bath, so I always find time for that. I’ll take phone conversations in the bath, anything.

Two or three baths? Man, I wish I had that kind of free time.

It’s funny—I was just talking to my friend before this about how in the Instagram era it’s so easy to edit your life so that it looks perfect. But I bleach my top lip and tweeze my eyebrows and you’d never get to see that, even though it’s a part of my routine. There’s still so much shame around the things you do to get ready while you’ve got a towel wrapped around your head. It’s important to me not to edit that out. I’ve been bleaching my top lip since I was nine. I don’t do it very often, but I do it! There’s that, and I use Fur Oil. I’ll use that anywhere from the ends of my hair to my eyebrows to my pubic hair. It’s an amazing all-purpose product.

And just like that millions of ladies just did a search for how they can purchase some Fur Oil.

Emma Watson, folks. She DGAF and we love her for it.

Except for maybe when she’s watching footage of herself as a young actress. Then she gets a little flustered as you’ll see from her appearance Monday night on Jimmy Kimmel Live.

Watch as Jimmy shares an outtake that shows Watson accidentally mouthing the words to the other actors’ lines.

“This is actually quite traumatic for me,” said an obviously embarrassed Watson. “I would ruin takes.”

“Chris would be like, ‘Cut! Emma, you’re doing it again.’ I couldn”t help myself. I was such a loser,” she cringed. “I really love those books. I really wanted to do my job well and I kind of over did it.”