Get Your First Look At ‘Jigsaw,’ The 8th ‘Saw’ Movie That Promises To Be Different 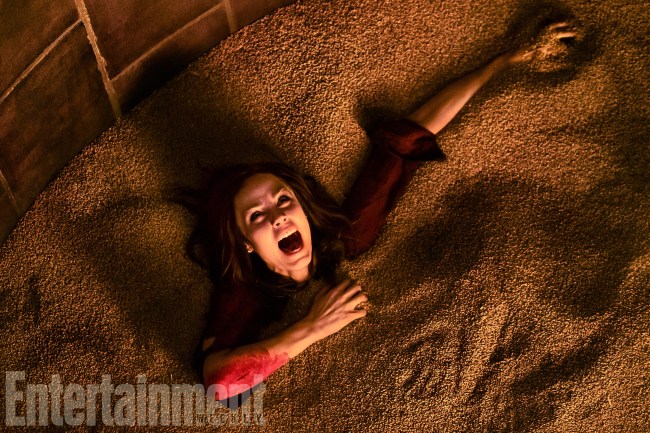 Do you wanna play a game? The newest chapter in the “Saw” franchise hopes that viewers still want to watch the popular horror series that rocked audiences when it debuted in 2004. The newest movie in the “Saw” series, which will be the first in seven years since “Saw 3D,” will be titled “Jigsaw.” The same name of Tobin Bell’s character John Kramer, a serial killer who played devious and gruesome games with his victims. *SPOILER ALERT* Jigsaw has been dead since “Saw III,” but it sounds like someone is picking up his love of gory games.

We’ve got some pretty wild traps in the film — we don’t shy away from the gore. It’s such a perfect Halloween scarefest. It’s perhaps not quite as vicious and more fun, which is something we tried to inject into it. But it’s still full of good fun gore, that’s for sure. And, on top of that, it’s got a really great mystery, and there’s very interesting twists. It’s “Saw” for 2017.

A kindler, gentler Jigsaw. So more jokes and less vicious. Not sure that’s why people watch “Saw” movies, but okay.

The new mystery thriller takes place 10 years after The Final Chapter. Suddenly, new murders are happening and the bodies are piling up. Has Jigsaw arisen from the dead or has one of his proteges creating deadly traps to test immoral people? “Jigsaw” carves its way into theaters on October 27th, 2017. Just in time for Halloween.