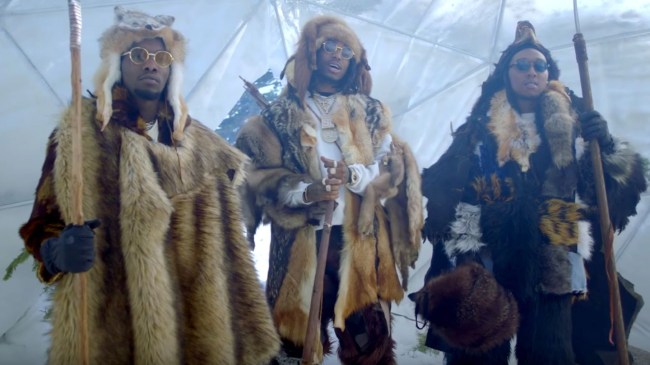 Some wild reports out of Las Vegas tonight, where sources claim that Migos and rapper Sean Kingston got in a fight just off the Vegas Strip. According to a Fox 5 Vegas report, all this happened outside the Agenda trade show at the Sands Expo center:

At least one person was arrested Tuesday after a shooting that was prompted by a fight between two groups of people near the Sands Expo center, police said.

According to Las Vegas Metro police, the incident took place in the 200 block of Sands Avenue at 4:18 p.m.

Citing a preliminary investigation, police said two separate groups were involved in a verbal altercation that turned physical. During the skirmish, some one in one of the groups produced a handgun and fired one round.

No one was struck by the shot.

Sands security made contact with the shooter and took him into custody. The person was turned over to police custody. The incident is under investigation.

TMZ has more details about the alleged involvement of Sean Kingston and Migos. Details are still pretty sketch:

Sean Kingston was beaten up badly Tuesday and people on scene say Migos was the culprit … but the story is bizarre and the group is not wanted by cops, at least not yet.

Law enforcement sources tell us it went down late afternoon at the Sands Expo and Convention Center in Vegas. We’re told Kingston and the guys from Migos got into it over an argument involving Soulja Boy and the 3 members of Migos beat Sean badly, allegedly kicking him and stomping on his head.

Law enforcement tells us someone from Sean’s camp pulled out a gun and fired once, but didn’t hit anyone. That person was detained by security and turned over to the Vegas PD.

By the time cops arrived both Sean and Migos had left. A short time later Sean was pulled over for a traffic stop and became “semi-cooperative,” though he did not name names.

According to TMZ, Migos is not currently “wanted” by the LVPD. And World Star says this is “100% confirmed”

Sean Kingston jumped by the Migos in Vegas? There's no sign of bad blood in this video. This was a few hours ago. 👀

Pretty crazy Migos would be involved in something like this after appearing on ELLEN for a bunch of moms AND having on the biggest albums in the country. Wild this comes on the same day Calvin Harris announces a new single with the ATL trappers, alongside Frank Ocean.

Check out this outstanding performance of “Bad and Boujee." @MIGOS are my new three amigos. pic.twitter.com/IlJblZ3fuL