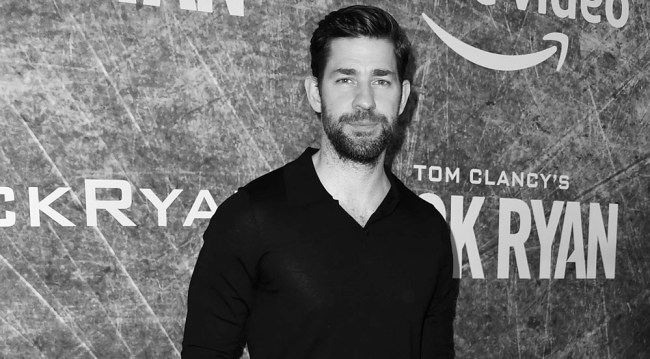 When you think of tough guy, action stars I know my first thought isn’t Jim Halpert from The Office. And yet, here we have John Krasinski playing legendary CIA analyst Jack Ryan in a new TV series for Amazon. And doing it well, I might add.

So how does one go from a sales representative at the Scranton branch of Dunder Mifflin to a former U.S. Marine and field officer for the Central Intelligence Agency?

As one would expect, it took a lot of hard work.

In order to look the part of Jack Ryan and become the fifth actor to play the role following Harrison Ford, Alec Baldwin, Ben Affleck, and Chris Pine, Krasinski followed a workout routine set up for him by trainer Simon Waterson.

Waterson has some experience in this sort of thing having previously trained two James Bonds in Pierce Brosnan and Daniel Craig, Jake Gyllenhaal for Prince of Persia and Source Code, Chris Pratt for Guardians of the Galaxy, Matthew Fox for Alex Cross, and Luke Evans for Dracula Untold, among others.

Nearly six months before Jack Ryan was filming its first scenes, Krasinski was putting in the work in the gym. By the end of it he was as strong as ever, moving well, and able to crank a 400-pound deadlift. That head time also allowed for Waterson to pinpoint plot points and make sure that the actor was dialed in physically to each sequence.

“I liked to look at our training and make sure that what was onscreen matched what would be born out of his routine and his job,” said Waterson.

Their workout plan each week consisted of five days of physical conditioning with an active recovery program including yoga or physiotherapy on the weekends.

Here’s a look Krasinsky’s workout plan, which, at some point, also involved The Rock…

Conditioning Circuits
Perform each of these circuits only once, moving down the list. Take as little rest as possible.

Strength Push/Pull
The circuits are performed in 3 descending sets, worked out 12 reps, 8 reps, and 6 reps (plus 2 semi-forced reps). Take as little rest as possible.

Get even more great workout tips like this over at Men’s Journal.