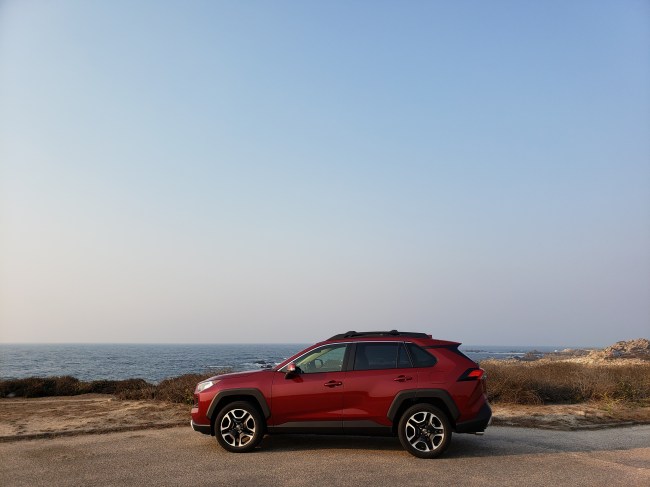 What are the five stretches of road that have changed you?

I kept coming back to that question in my head on a recent Saturday afternoon, cruising around the breathtakingly beautiful 17-Mile Drive in Pebble Beach in the brand new 2019 Toyota RAV4.

Think about it for a second: We all have drives that fill us with such a deep sense of adventure and contentment that we’re just not the same person as we were when we climbed in the driver’s seat all those miles ago. I can rattle off a handful drives that served as a bit of a personal metamorphosis: The drive from Denver to Aspen over Independence Pass up Colorado Highway 82, as I experienced it for the first time in late May 10 years ago, right when it first opened for the summer with walls of snow on each side of the road above 11,000 feet (…it peaks out at around 12,000). Empty desert drives from Marfa, Texas to El Paso or from Los Angeles to Vegas, through the lesser-traveled parts of the Mojave. Back in my home state of Pennsylvania, the drive up US 15 from Marysville, hugging the Susquehanna River. Or the snaking stretch of road from Mount Union, Pennsylvania to State College, through the Tuscarora Mountains. In my most recent home on the west coast, the first time I drove up the PCH to Point Mugu solo or on Mulholland Drive, winding through hairpin turns in the Santa Monica mountains. Or the climb through the San Gabriels from Covina on San Gabriel Canyon Road. 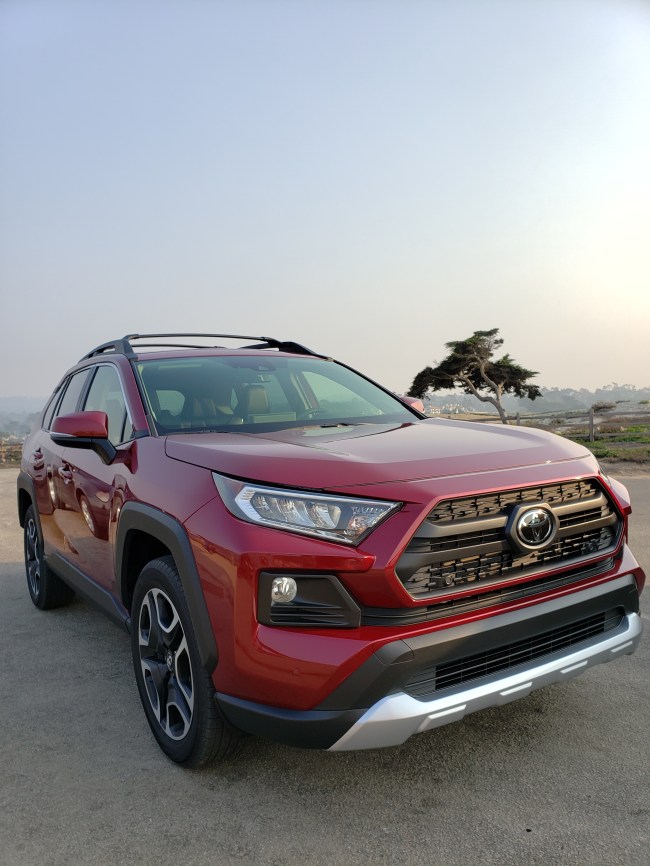 That’s way more than five, but you get the basic gist: There are roads out there that change our perspective and sculpt our spirits for the better. Google Maps might tell us stick to the highway, but there are roads that we tell others to take even if it’s out of the way. We say, as an off-the-cuff recommendation to friends or strangers, “You just have to see it.” But really what we mean is “Yes, it’s the long way, but there’s a certain magic to going out of your way on this particular road and you just have to experience it for yourself.”

It’s the best kind of adventure.

I didn’t drive the first time I “drove” California’s famous 17-Mile Drive. I rode. I was in middle school, about a year and a growth spurt away from being considered a teenager. Firm believers in the educational and transformational power of travel, my retired grandparents took my brother, sister, and myself on a road trip around California, starting in San Diego and ending in the Bay Area.

Reflecting back, there were two huge takeaways from that trip: 1.) It was the first time I felt a deep geographic connection to a place and said “Wow, I feel like I belong here,” in regards to the West Coast and 2.) It was the first time I was wowed by a Jack Kerouac/Woody Guthrie-esquie sense of wonder from a road trip. It was wildly empowering feeling that I’m not sure I’ve ever shook, 20 years and seven cross-country road trips later. 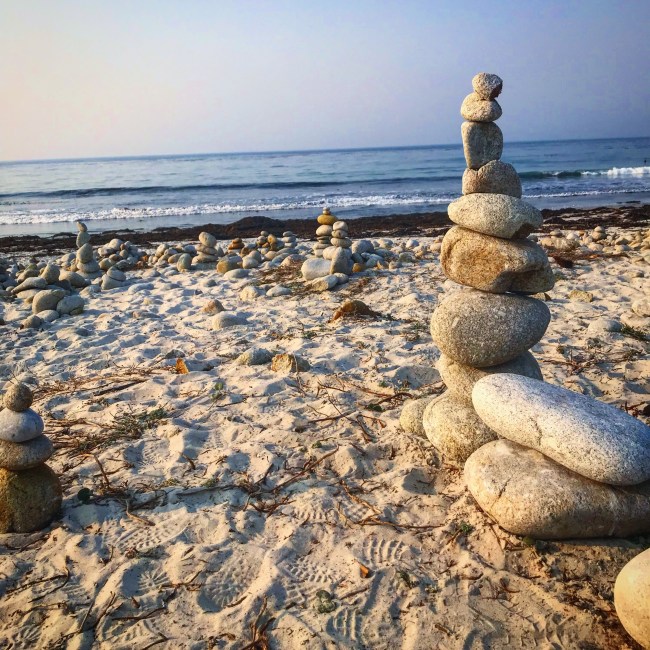 The drive from Los Angeles to San Francisco up the Pacific Coast Highway was an easy highlight on that trip, especially the iconic stretch around Big Sur. We did the 17 mile drive through Pebble Beach early in the morning before hanging in Monterey and Santa Cruz, then eventually pushing on to the agricultural town of Gilroy, known as the least vampire-friendly place on earth for the amount of garlic harvested there.

I was awestruck by that part of the coast. I could stare out into the blue for hours, especially with the crags and piney bluffs meeting the sea. It was a hoot to experience it years ago with family I cherish dearly. So when Toyota invited me to Carmel to kick the tires on the new 2019 RAV4 – the first relaunch since 2012 of the world’s best-selling crossover SUV –  I quietly yelped to myself.

“Wow, how lucky am I? I get to relive that feeling all over again.” 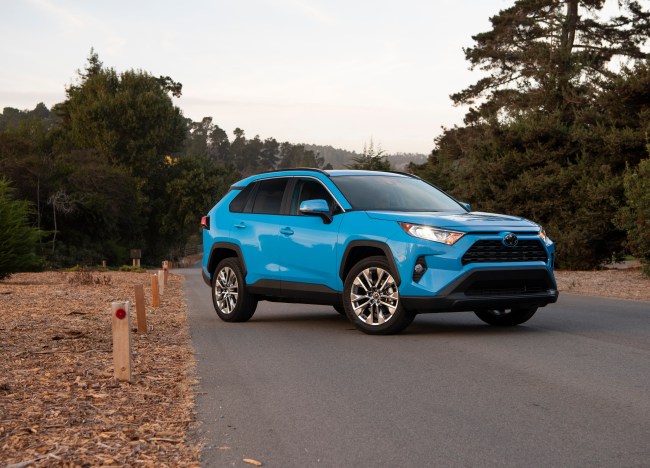 Let me talk about my chariot for the afternoon: The brand new 2019 Toyota RAV4. Short for Recreational Activity Vehicle with 4-wheel drive (…get it? RAV4!), it was the first of it’s kind in the crossover SUV segment when Toyota first introduced the car to North America in 1995. By 1997, it was being marketed as a vehicle capable of fulfilling wanderlust for dot com-era Gen-Xers getting ready to cash out on their Pets.com stock and enter a new life stage by starting a family.

Note the “fully caffeinated engine” in this print ad from 1997. What an image! The visuals make me want to go hiking, skiing, and head home to my warehouse loft apartment in Seattle with a freshly brewed Americano in hand after a day in the mountains. You can almost hear the 56k modem dialing up on a Gateway tower that was delivered in a cow-printed cardboard box: 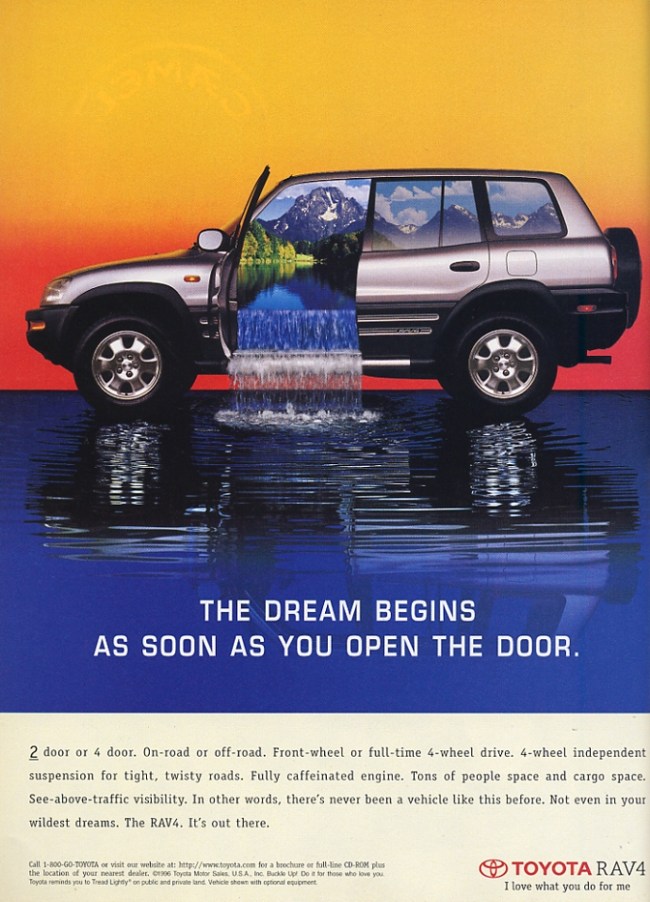 Though 20 years old, the messaging above is what the RAV4 has always been about, even if the vehicle is used by a huge section of car buyers as a safe, reliable around-town grocery getter. It’s a vehicle engineered with the pragmatic adventurer in mind, whether it’s lashing kayaks to the roof for a day on the river or a dirt-road drive to a particularly remote trailhead.

I heard an eloquent marketing person describe the RAV4 value-prop in the segment best a few months back: It’s a car for micro-adventures. The adventures you have at a music festival in the woods or with a surf board or mountain bike and then climb back in your own bed at night. An when you get rained on at said music festival and the parking lot turns into a disastrous mud pit/tire trap on the Sunday you’re trying to leave? The all-wheel drive capabilities of the RAV4 spring the rescue, ensuring that a hot shower, clean pajamas, and TV with Netflix are just a couple hours away. 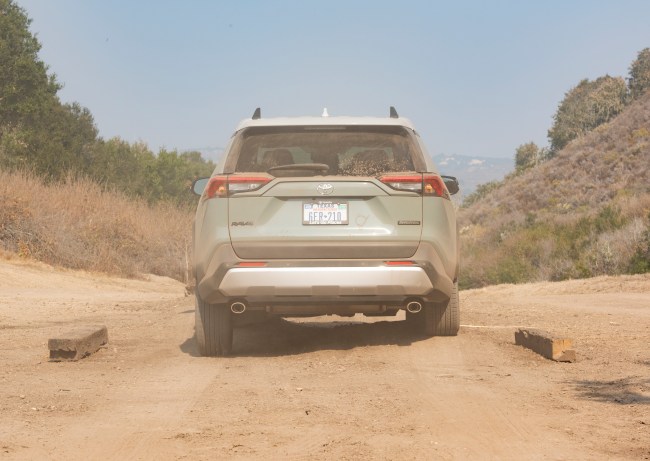 The fifth-generation of the RAV4 features a brand new design, revealed this past year at the New York Auto Show. Compared to others in the crossover segment, it has a husky presence with clean, sci-fi edges – like a Transformer that’s finally grown into it’s fullback shoulders. Though it’s definitely not as bulky as a true full-size SUV, the new generation of RAV4 is a big, wide car, with lots of interior room. Even with the size, it boasts incredible fuel economy, especially in the hybrid models – AWD models get an estimated 26 city/33 highway per gallon, though the more rugged Adventure and Limited AWD see an estimated 24 city/33 highway miles per gallon.

In reality, the all-new 2019 Toyota RAV4 looks and feels like an SUV that’s ready for a couple bumps and mud bath, with obvious design nods to it’s older and more capable off-roading cousin, the 4Runner. It handled mogul terrain like a champ, even with sharp tilts.

All in, Toyota is manufacturing six different trim levels for the 2019 RAV4: The XLE, XSE, XSE Hybrid, Adventure, and Limited models. All come with optional AWD, a 2.5-liter four-cylinder engine with 203 horsepower, and almost all available as hybrids, with the exception of the XLE Premium and the Adventure. 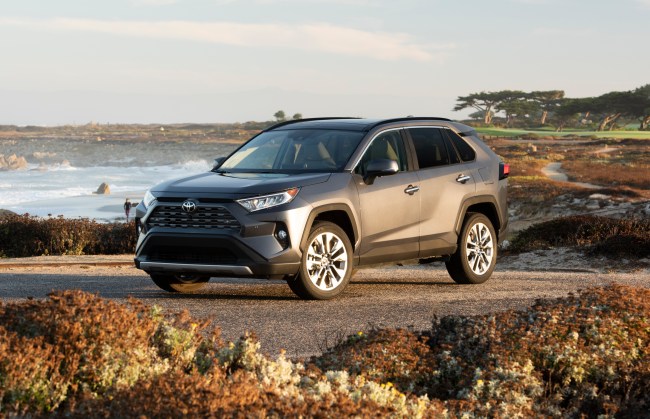 Let’s talk about the RAV4 Adventure variant for a moment, since it’s Toyota’s show pony for the new generation of RAV4. You’re probably not going to crawl up any boulders in a RAV4, but the Adventure handles moderately rough terrain like a knife through warm butter.

The Adventure edition features an advanced all-wheel drive system with what Toyota calls Dynamic Torque Vectoring. This is an advancement in automative technology that allows varying the torque added to each wheel. Just ease on the gas in the muddy, sand, or snow and the torque vectoring system distributes powers to all four wheels in a way that pushes the RAV forward. 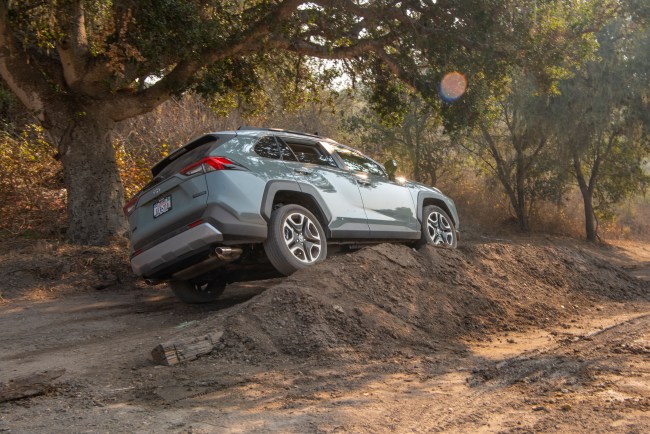 The engineering of the RAV4 does all the work while you sweat it out with your foot on the throttle. A display on the dash shows the torque being applied in real-time to each wheel, lighting up like a pinball machine in a situation where you need it to kick in.

Check out how the torque vector system kicked in for me on a lap around an off-roading course. It handled this sandy spot on a small slope with ease.

The AWD system also has a integrated management system that reacts in realtime to slippage, enhancing steering ability. The downhill assist that helps control braking in off-road situations is particular useful for navigating slippery slopes. And when you’re off-road, Toyota’s Multi-Terrain Select let’s you dial-in AWD drive modes for the terrain you’re on. These light off-roading controls are quite user-friendly, from my experience. 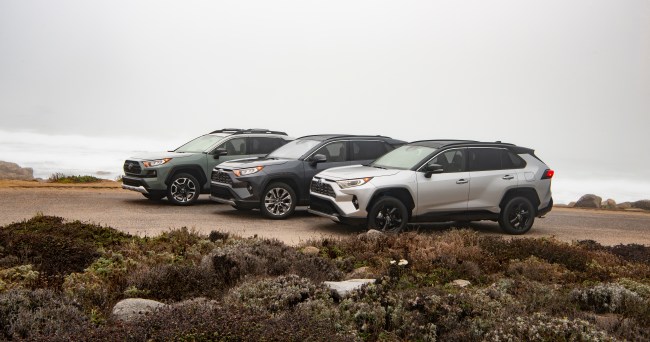 The inside of the RAV4 has all the connectivity and creature comforts you’d expect in a 2019 vehicle. The updated RAV features a JBL speaker system that cranks through 11 speakers in nine locations at 800 watts through Toyota’s Entune 3.0 audio system. The Entune 3.0 runs via a handsome 7-inch touchscreen, capable of all the modern bells and whistles, including Wi-Fi Connect powered by Verizon, Amazon Alexa and Google Assistant capability, and Apple CarPlay compatibility. Yes, if you rig everything correctly, you can have your car adjust your thermostat at home while coming back from the trail. Just yelp “Hey Alexa” with the right connectivity through the app and you’re plugged-in to the internet of stuff. 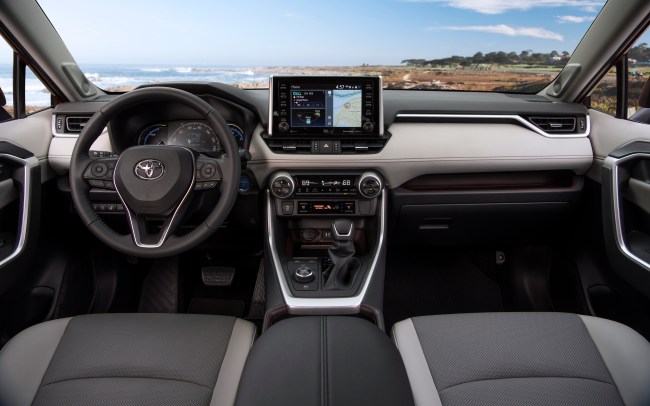 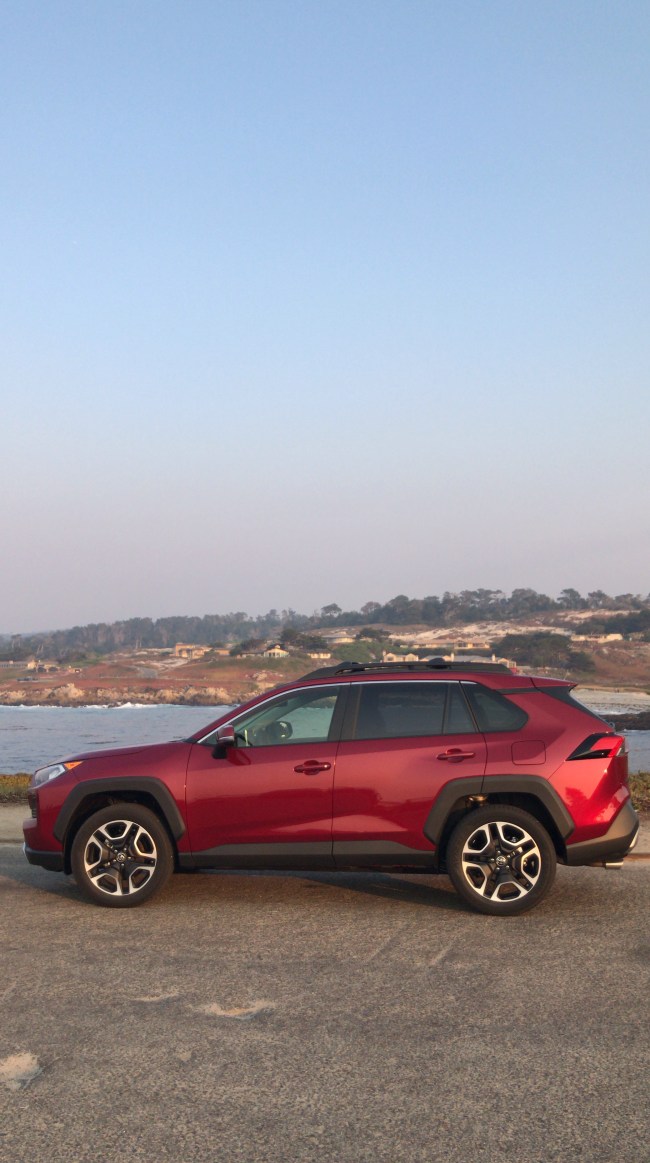 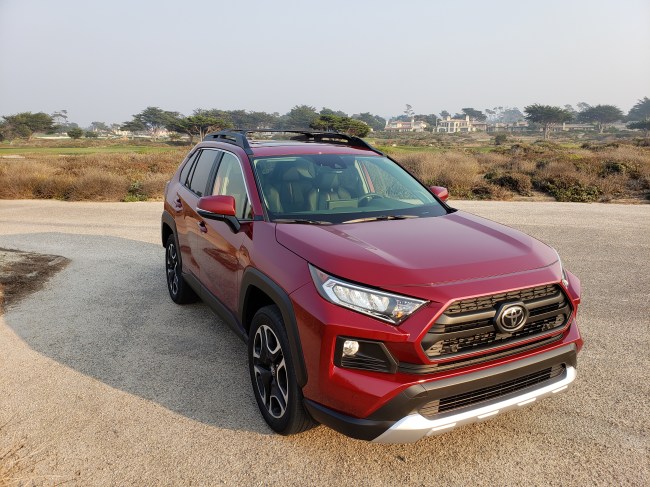 It’s impossible to overstate how beautiful the 17-Mile Drive is. Developed by a group of railroad barons in late 1800s, the road is a tourist destination over a 120 years old, offering some of the most scenic vistas in North America. It’s hallmarks are rocky bluffs carved by the Pacific currents, along groves of Monterey Cypress trees and pebble beaches. It’s home to three of the world’s bucket list golf courses: Spyglass Hill, Cypress Point, and Pebble Beach, with dramatic fairways and greens synthesized into a seascape of rolling hills and jagged, sandy coves. 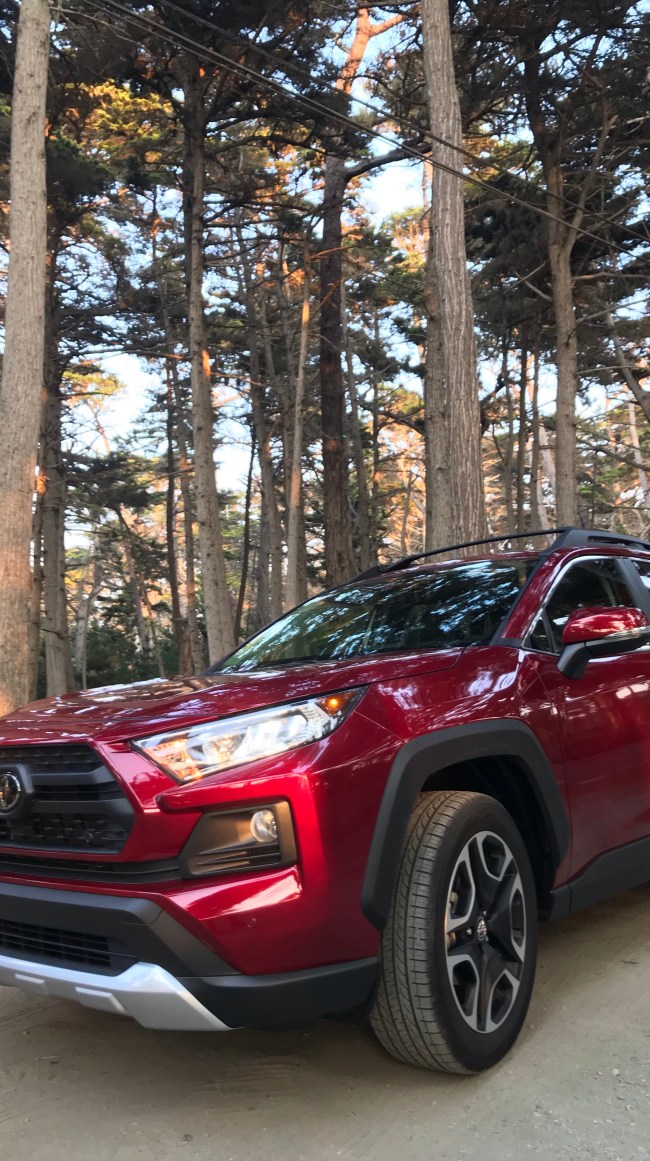 It’s a drive that changes you, even though traffic moves with the volume of tourists. The serenity and dramatic natural beauty of the environment consumes you, especially at landmarks like Ghost Tree, Pacific Grove, and Bird Rock. Every turn is a new environment to explore,  often even more thrilling then the next. Underlying it all is a certain feeling of zen; a transcendentalism with the surroundings. 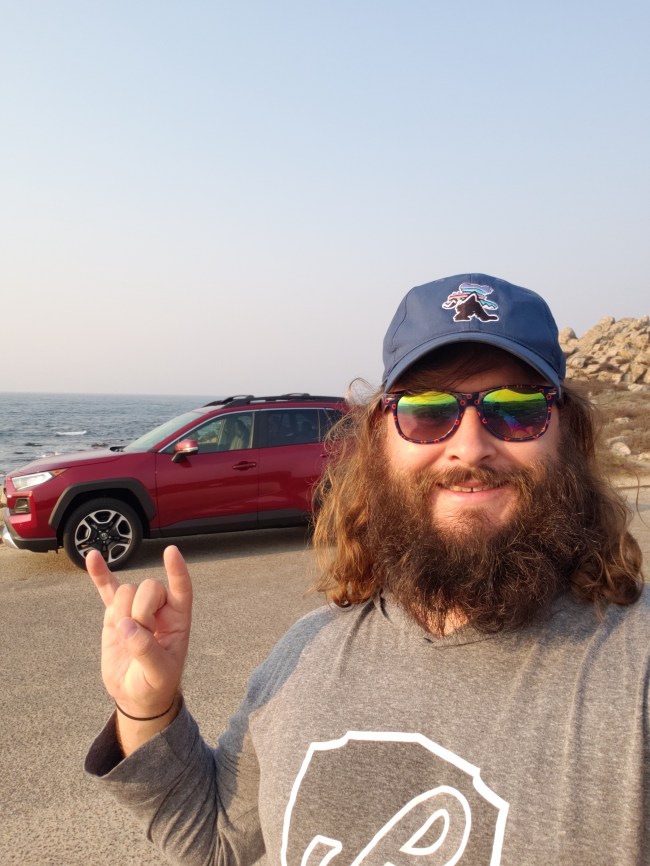 It’s the perfect place to road test a RAV4, with the windows down and Mark Knopfler’s Sailing to Philadelphia pouring out of the JBLs. It handled the road smoothly, getting nods from strangers at pull-offs for beaches and surf spots while I snapped pics of the surroundings.

I spent about three hours crawling around the 17-Mile Drive, stopping to watch golf groups squeeze in their rounds before dark or admire seals beached on rocks, soaking up the a faint autumn sun.

If there’s one thing I learned about life on the west coast years before moving here, it’s that you don’t miss sunsets.

The sky grew fire red around 4:30, as it does in November. I opted to watch it sail slowly over the horizon back a bit from the coast, over a fairway from the Pebble Beach Golf Club.

With my RAV4 pulled off on the side of the road, watching a group putt their final shots of the day before heading back to the clubhouse, there were two thoughts in my head.

“Next time, I should bring golf clubs.” 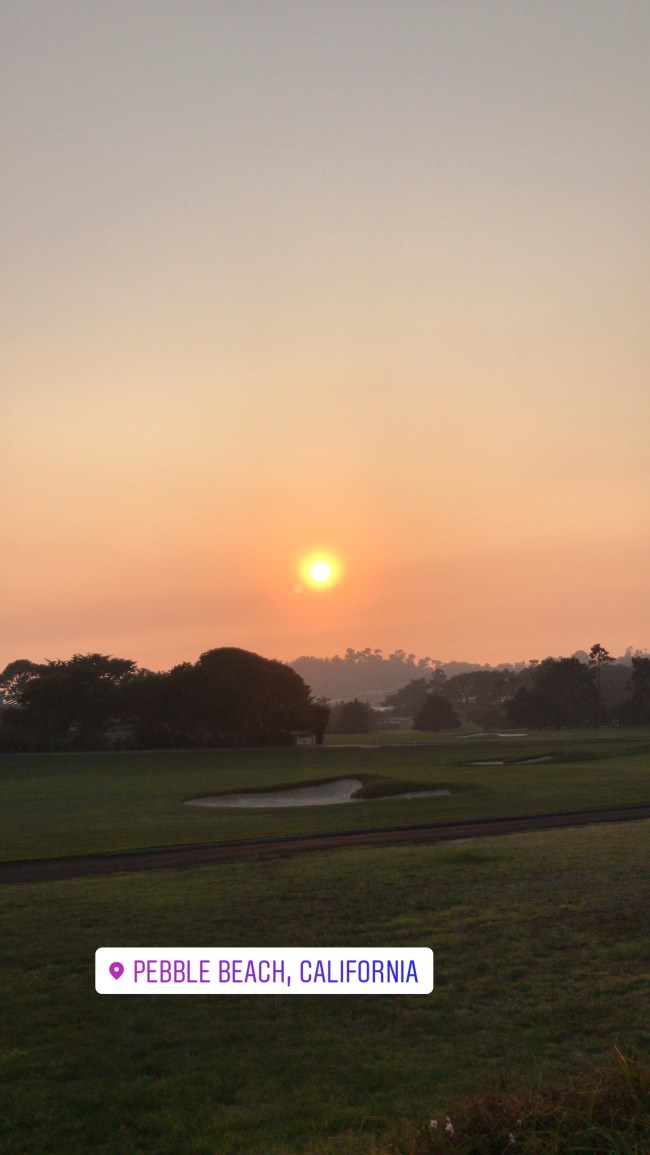