These Are Best Rolex Watches That Money Can Buy

#watches
BroBible may earn a commission if you buy a product or service via links in this article.
by John ThompsonMarch 17, 2022 3:01 pm 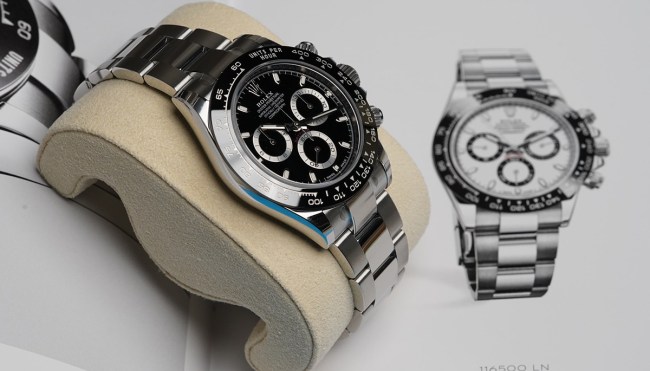 Whether you’re into watches or not, a Rolex is something every man should strive to achieve in their lifetime.

Rolex is a watch brand symbolizing achievement, class, and prestige. When you find the right Rolex, you’ll find it serves as a signifier to others that you have respect for the finer things in life.

To put it a matter of fact, owning a Rolex is a gamechanger.

We’ve built out this simple buyers guide to provide you with the basic knowledge of how to navigate buying a Rolex watch.

How Much Does a Rolex Cost?

It’s true Rolex watches can cost upwards of $20,000, but those are for the high-end timepieces made from precious metals.

If you know what you’re looking for, you can secure a beautiful Rolex watch for a little over $5,000. Remember this is a watch that’s going to last you for years—even decades! So while the buy-in price might seem intimidating, it’s going to be well worth the investment.

How Many Different Rolex Models Are There?

Contrary to what many individuals might think, there aren’t that many Rolex models out there. The watchmaker rarely releases a new model, with the average time ranging several years—and sometimes even a full decade.

Depending on how you break it down, there are essentially 14 different Rolex models (or “variations”) the Swiss watchmaker is currently producing for men.

Rolex does produce a beautiful Lady Datejust for women, but we’re going to leave that out for the sake of ease. We’re also grouping in the Explorer and Explorer II as well as the Yacht-Master and Yacht-Master II for the same reason.

Rolex watches can be broken down into two families, classic and professional.

The classic Rolex watch models are your traditional models and dress watches. The professionals are models made for specific uses and for sports.

We’re going to sort the 16 Rolex variations below by family first, then break down each individual model. On each model, we’ll include the estimated costs and a brief summary so you can familiarize yourself with the one that would fit your lifestyle the best.

The costs you find below are calculated by retail charts for Rolex in 2022 and by pre-owned prices by a number of trusted sellers. It’s worth noting Rolex has raised its retail prices this year due to the steel shortage and increase in the rarity of precious metals overall.

The Datejust was the second biggest hit from Rolex. In 1945, Watchmakers took the best qualities of the Oyster and added a display date window at 3 o’clock that would switch over right before midnight (as opposed to waiting hours for the date to rotate over).

Perhaps the most significant difference between the Oyster and the Datejust is the Datejust had an added bezel. The bezel has since been characteristic Rolex has used to make the watch pop, outfitting the top ring with precious metals like 18k gold.

In 1956, Rolex rolled out the Day-Date. The window for the day of the week was smoothly placed in an arched opening at the top of the dial.

The Day-Date would eventually take a liking to U.S. Presidents like John F. Kennedy and Ronald Reagan—which is why the watch model is also referred to as a “Presidential.”

Presidential is one of those Rolex models that can be tricked out in gold and jewels. Many will note that owning a Presidential exudes a higher level of prestige and status when compared to other Rolex models.

The Sky-Dweller was announced in 2012, and the general point of view is you either love it or hate it. What’s unique about the watch is Rolex packed it with tons of features and a wild inner movement.

A post shared by Son Of A Watch (@sonofawatch)

There’s an annual calendar that displays the months via a small aperture on each of the 12 markers on the dial, a date window at 3 o’clock, and a 24-hour GMT locator on the ring above 6 o’clock. What’s awesome is the bezel can be turned to choose whichever function you want to set via the crown.

The Oyster Perpetual is essentially the OG of the Rolex watches (first gaining widespread popularity as far back as 1926). The OP was the world’s first waterproof watch and automatic winding watch—hence the term “perpetual,” as the OP’s rotor constantly swings 360 degrees around the central axis in one direction.

Oyster Perpetual doesn’t have a ton of bells and whistles, but that doesn’t matter. If you take one look at the watch you’ll instantly recognize its high level of craftsmanship.

Released alongside the Yachtmaster in 1992, the Pearlmaster is pretty much a Datejust with bling. They’re more expensive and made with more precious metals.

The two watch models released some buzz when first announced, for it had been several years since Rolex had rolled out any new variations. These days the Pearlmaster is viewed as a symbol of wealth. While expensive, they’re normally easier to find at retail price.

The Cellini collection is filled with high-end dress watches. Rolex’s use of materials like 18k white gold and fine leather really plays up a 1930s type of energy.

In terms of buying a true luxury watch, the Cellini’s are a good place to start before opening up your pockets further for a more expensive timepiece like a Patek Phillippe.

The Explorer didn’t become its own model until after the first successful summit of Mt. Everest by Sir Edmund Hillary’s team in 1953. Sir Edmund Hillary summited Everest with an Oyster Perpetual but after the historic event, Rolex made some tweaks to the Perpetual by adjusting the dial and printing “Explorer” on it.

Thus the Explorer was born, becoming the first sports model Rolex to be released. Explorer would also start the Professional watch family of Rolex. Today the Explorer is seen as a solid entry-level sport Rolex thanks to its availability and price.

While Explorer I was created with climbing in mind, Explorer II was created in 1971 for cave exploring, or spelunking. A date display and a GMT feature was added to help read through different time zones.

Sea-Dweller is a model that plays on the Submariner. In fact, the Sea-Dweller is just a more upgraded model to the original dive watch. Sea-Dweller was released in 1967 and rated to an impressive depth of 4,000 feet.

In 2008 Rolex unveiled a Deepsea Sea-Dweller version that rated 12,800 feet, which broke the world record at the time. Often times the Sea-Dweller is labeled as the “big brother” to the Submariner.

The Submariner was Rolex’s first dive watch. It has origins similar to that of the Explorer I, where, in 1953, Rolex outfitted an Oyster Perpetual with an external bezel and added a stronger bracelet.

The Submariner is definitely built to handle scuba diving, but these days the silhouette is has become so iconic you’ll see it being worn more as a status symbol. Watch enthusiasts thirst after stainless steel Submariners with the OG black dial, which sell significantly higher on the secondary market.

Yacht-Master was unveiled at the same time as the Pearlmaster in 1992. The Yacht-Master has influences of prep and sport styling. While the watch has been toned down over the years, it hasn’t fully escaped its reputation as being a fancy Rolex to show off status.

Don’t get me wrong it looks great, but as far as function goes there are better models out there.

Yacht-Master II was invented in 2010 to essentially plug in actual technology useful for sailing. The watch features a 10-minute countdown stopwatch for sailboat racing and features 300m of water resistance.

What’s cool is the countdown stopwatch is in the Ring Command bezel, so one can select between 1-10 minutes to be timed. Thanks to its recent release, Yacht-Master II is easier to buy at retail than the Rolex models that carry historical significance.

The GMT Master II origins lie in the original GMT model that was requested by Pan American Airlines so they could have a watch where its pilots could track multiple time zone at the same time. In 1982, the GMT Master II came in as the GMT’s replacement, showing a slimmer case and a new movement.

It’s also worth noting the demand for a stainless steel GMT Master II, which is one of the most desired Rolex models. You’ll have to pay a higher price on the secondary market because securing a stainless steel one at retail is nearly impossible.

Made in 1963, the Daytona was outfitted with a chronograph system so automobile racers could use the watch to track performance times.

Fast forward to today, and nothing quite beats the Daytona in the lineup of Rolex watches. Paul Newman’s Rolex Daytona is one of the most popular watches in all of history. It sold for $17.8 million at an auction back in 2017.

Milgauss is a bit of a quirky watch. It doesn’t look like much on the outside, but on the inside, it packs some serious features. The watch has a Faraday cage inside to block electromagnetic fields, and it can withstand magnetic fields up to 1,000 gauss—hence the name. Gauss also stands for “mile” in French.

This feature is because the Milgauss was developed for scientists and engineers back in 1956. Milgauss went out of production in 1986 but was revived in 2007. The design feature that distinguishes the watch from other models is the playful lightning bolt seconds hand on the dial. Milgauss can be likened to one of those “IYKYK” watches.

The first Air-King was released in 1958. It was made to be a pilot’s watch, but in reality, there were no features added to necessarily make a pilot’s job easier. So think of the timepiece as one that pays its respects to aviation.

The Air-King isn’t that highly sought after, but it still looks great on the wrist. The perk of getting an Air-King is it’s one of the few stainless steel models you can easily get at retail.

And in the case of buying an Air-King vintage versus retail, the model is so available that it makes more sense to pay up for a brand new one and wear it into oblivion on your own.

How to Find the Best Starter Rolex

As you can see from the guide, the prices in different Rolex models have a significant range.

The Datejust, Explorer, and Oyster Perpetual are three great starting points that will only set you back roughly $5,000-$6,000.

If you’re looking to go a step up, then the heavy-hitter models like the Submariner, Daytona, and GMT Master II are the way to go.

And if you’re looking for something unique we think the Milgauss is totally cool considering its history. A Cellini would also be a good one to get because there are so many different styles.

Onward with Your Rolex Journey

So there you have it—the best Rolex watches money can buy.

Continue to come back to this Rolex guide as a point of reference in your Rolex journey.

A Rolex watch might not be every guy’s cup of tea, but if you’re serious about getting one there’s a model out there that will fit you just right.

All it takes is a little bit of research in knowing what to look for and where to look!