GEAR REVIEW: The Google Max Is The Best Sounding Smart Speaker In The Game

#gear reviews
BroBible may earn a commission if you buy a product or service via links in this article.
by Brandon WenerdMarch 6, 2018
Facebook Twitter Reddit Flipboard 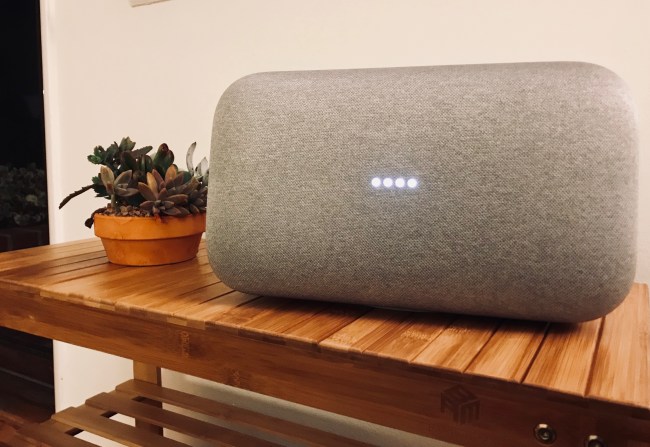 In middle school, I was obsessed with the Crutchfield catalog. I poured over the beautiful stereo systems and home theaters in those gloss pages, dreaming about upgrading my chintzy, hand-me-down bookshelf system for something that made my burgeoning CD collection sound like it was meant to sound: Deep and rich with bass at mid-volume without a tweeter tweaking out on the highs. It took me about a year to save $300 from various odd jobs for mid-tier Technics receiver + speaker combo (…this exact same one), with about 80 watts of power in each speaker channel. Hooking that system up in my parents’ basement was damn near euphoric; the audio quality was so warm and crisp, breathing new life into the hodgepodge of rock-n-roll records I had in my collection at the time: Cream, Jimi Hendrix, Zeppelin, etc.

A house isn’t a home until you can fill it with Neil Young’s “Cinnamon Girl” at full volume, feeling Crazy Horse bassist Billy Talbot thump the floor boards to the point where you’re concerned about the neighbors paying a visit. Great music is best enjoyed loud, on a speaker system that gives you the ability to pick out the sonic layers that give a composition depth and soul.

A few weeks ago, I brought home the new Google Max, Google’s answer to a premium, HiFi smart speaker. After a couple taps and synching it to my streaming accounts and WIFI via Google’s easy-to-use Home App, I made my command as clear as day:

“Hey Google… Play Everybody Knows This Is Nowhere.”

“Now playing Neil Young’s Everybody Knows This Is Nowhere….”

And on a three count, Google Max kicks it to Google Music for the glorious opening power chords to my beloved “Cinnamon Girl”, one of the great rock album openers of all time. Over the next 40 minutes and 29 seconds, I sat there on my couch basking in crunchy, red-blooded Stratocaster fuzz, wrapped in all those punchy guitar solos like a warm blanket.

As an audiophile, the Google Max captures all the highs and lows from Neil Young’s euphonious 1969 album with Crazy Horse – Two 18mm tweeters leave high-octave vocal harmonies razor sharp while two 4.5-inch woofers bellow out the ominous thump in “Cowgirl in the Sand.”

In terms of sheer audio quality, the Google Max leaves Amazon’s Alexa-enabled Echo devices in the dust. And, like — It should for the price point – putting it in the range of a Sonos system. It delivers the amplifier power and volume of top tier systems, making it the perfect full-volume streaming device for the rooms you live in the most.

How does the Google Max accomplish that? Like everything else in modern life, sonic algorithm magic. Whether you have your unit on the floor, a table, or shelf, Google will utilize what it calls “Smart Sound” to balance and equalize the speaker to the best acoustic in the room. Like an old school stereo EQ, Google’s audio AI wizardry tinkers with the frequencies and decibels (…especially the bass output), optimizing the speaker’s output to fit the room. For true audio bliss, you can synch it to another Google Max speaker for perfect stereo sound from a vinyl system. It also has multi-room functionality if you want to go from a Google Max in your living room to a Google Mini in your bedroom, bathroom, and kitchen.

On top of that, six different mics Google Max cabinet gives you all the voice-control integration of Google Assist. It will hear you when you’re rocking out with a stern “OK, Google!”, in case you’re ready to change the mood or need to order that Uber (…synched up with your Google account) to head out for the night. Just look for the three glowing white lights in the middle of the speaker that glow like HAL 9000 from 2001: A Space Odyssey. They indicate that, yes, Google is indeed listening to you, ready to tell you the weather, sports scores, and basically any information worth Googling while also taking those commands for compatible smart home devices like coffee makers, lights, thermostats, and doorbell home security systems.

Personally, I use it to all the time to dictate to-do lists and add events to my calendar (used across a work Google calendar) without punching it into my phone. It even acts as the world’s loudest alarm with a new feature that let’s you set whatever song you want to wake you up…

If you’re a Google-kind-of-person looking for a spectacular high-fidelity smart speaker that integrates into Google’s world of music and entertainment with Chromecast, I can’t recommend the Max enough. In addition to being the best sounding smart speaker in the game, it hits all the high notes of a device that keeps your busy life completely in-synch.