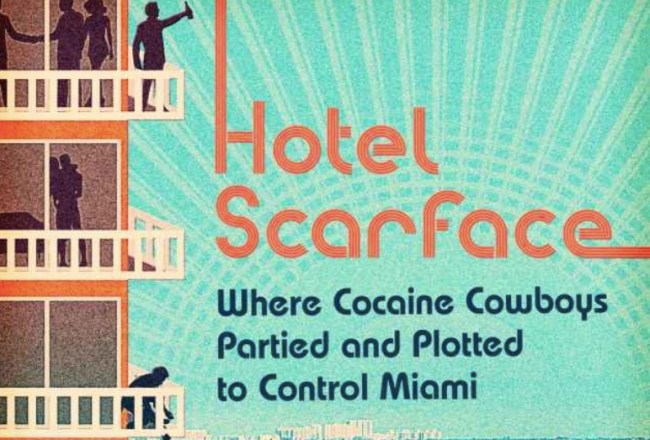 If you’ve ever seen the film Blow, Scarface, or the wildly entertaining Cocaine Cowboys documentary then you’ve already caught a glimpse into what Miami was like in the 1980’s. When cocaine hit Miami it changed the city overnight. That white powder is responsible for transforming Miami into the city of excess that we all know and love today.

Hotel Scarface focuses on the Mutiny Hotel at 2951 S. Bayshore Dr. in Coconut Grove, Miami. It was the headquarters for Miami’s cocaine kingpins. The hotel was a hot spot for rock stars, Hollywood celebrities, and wealthy playboys who would throw $$$$$ on a suite, champagne, and snort more lines than any mortal could ever imagine. If you enjoy historically accurate stories about rock stars partying their asses off and mind-bogglingly large sums of money exchanging hands then Hotel Scarface (Buy Now: $12.99) needs to be on your reading list. The Mutiny Hotel is a free-trade zone for drug dealers, criminals, and the wealthy elite. A mixing pot that embodied the change to come in the city of Miami’s landscape.

“We couldn’t just walk into the Mutiny with a cheap rubber watch,” said Wayne Black, the undercover cop who would borrow a Rolex from the police evidence locker before going there. “You’d be buying Dom with the bad guys. You owned a Pinto but drove home a Jag. ‘Daddy,’ your kid would say, ‘the neighbors say you sell drugs.'” (via MNT)

When I throw out a wildly vague statement like ‘cocaine changed Miami’ you have a decent idea of what I mean, but there’s so, SO MUCH more to the story. Author Roben Farzad’s book hit shelves today, and Hotel Scarface: Where Cocaine Cowboys Partied and Plotted to Control Miami 100% needs to be on your reading list. In fact, you should order the book right now because I can all but guarantee that this will be the most enjoyable and entertaining non-fiction book you’ll read this year.

Hotel Scarface uses never-before-seen documents and exclusive interviews to piece together how the Mutiny Hotel and cocaine re-shaped the entire city of Miami. The author, Roben Farzad, is a special correspondent on PBS NewsHour and previously a senior writer for Bloomberg Businessweek. He’s a graduate of Princeton University and Harvard Business School. Suffice it to say that this is an author who does his due diligence in reporting the facts, and one who is talented enough to piece together one of the most intriguing drug-related stories in U.S. history.