#Justin Timberlake
BroBible may earn a commission if you buy a product or service via links in this article.
by Jorge AlonsoFebruary 5, 2018
Facebook Twitter Reddit Flipboard 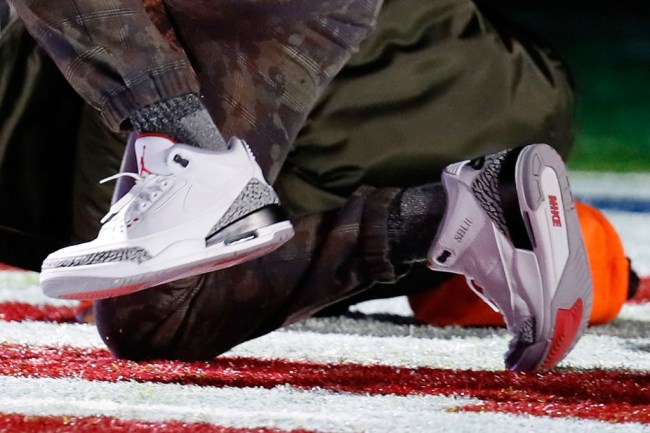 Last night, Justin Timberlake debuted his Nike Air Jordan 3 JTH during the Super Bowl LII halftime show, which Nike then surprisingly put on sale at the end of his performance on the Nike SNKRS app.

Using the original Air Jordan III sketch as its foundation, this colorway is the first of multiple editions to take inspiration from Timberlake’s recently released “Man of the Woods” album. Featuring a reflective Swoosh, the shoe is designed to add extra flare to Timberlake’s stage presence under the bright lights on Sunday night.

Of course, the JTH 3’s sold out very quickly which left several people on the Internet who tried to cop a pair extremely salty.

Was on that JTH X Jordan 3 Release as soon as it hit and still didn’t get it. I can’t win anything on SNKRS. @nikestore I’ve been taking that “L” for years now.

They dropped on Nike SNKRS. Sold out in like 4 seconds. I took a mad L pic.twitter.com/t99NilARMJ

If your desperate enough you can cop a pair of Timberlake’s Air Jordan JTH 3 on the secondary market for $2k which seems like a pretty insane amount of money for a pair of sneakers.

Cheapest listed Timberlake Jordan 3 on @stockx is now at $2,000. pic.twitter.com/j7W24FNUfz

According to Nike, future Justin Timberlake x Air Jordan sales are scheduled to release at select stops on Timberlake’s North American tour. Hopefully the price on the secondary goes down a bit once more pairs hit the streets.