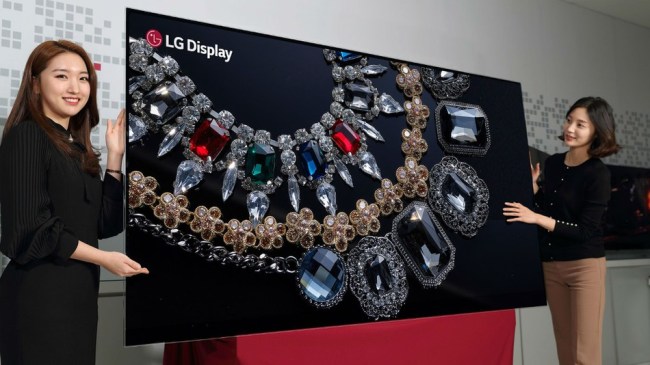 CES 2018 kicks off this Sunday, January 7th through Friday, January 12th. That is where all of the state of the art, newest, and coolest electronics are unveiled by the top tech companies on the planet. There you will find mind-blowing gadgets, gizmos, and contraptions that you won’t be able to afford for another five years when they come down to a reasonable price. One of those ultramodern electronics that you will surely dream of owning is LG’s 88-inch 8K OLED TV.

LG will officially unveil their crystal-clear mammoth display at this year’s Consumer Electronics Show in Las Vegas. The South Korea tech company has been tight-lipped as to the specs on this big and beautiful TV, but did reveal that it will have an eye-popping resolution of 7,680×4,320, which is an astounding 33 million pixels. That would certainly be a nice fixture in your living room for the Super Bowl.

This is the world’s first 88-inch 8K OLED TV. It is an OLED display which means ink-dark blacks, vivid colors, and wide viewing angles. Plus this colossal TV has extremely slim borders. As for the cost of this baby, LG has not announced a price point as of yet, possibly to not give consumers sticker shock. You can expect it to cost more than LG’s current 77-inch OLED television which has a hefty price tag of $20,000. We’ll provide more coverage of CES 2018 as it kicks off next week.