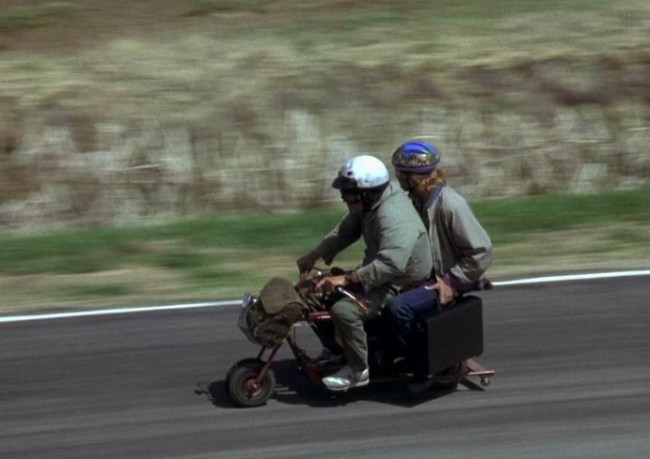 I’ve got room for one more if you still wanna go to Aspen. The iconic mini bike from Dumb and Dumber is available for purchase. That’s right, the mini bike that Lloyd Christmas and Harry Dunne rode to Aspen in Dumb and Dumber is for sale. The best part is that you won’t have to trade-in your 1984 Ford Econoline Base van that resembles a giant sheepdog to cop this famous ride.

The actual mini bike from the 1994 comedy movie starring Jim Carrey and Jeff Daniels is currently for sale on eBay. At the time of publication, there were 10 bids and the highest bid is $9,600. But that’s a bargain when you think of all of the one-of-a-kind features on this ride. You can get 70 miles to the gallon on this hog. Not to mention that you never have to pull over to go to the bathroom and you can “just go man.”

The eBay listing that is selling the fearsome motorcycle:

This one of only two existing mini bikes that were made for the original classic comedy Dumb and Dumber back in 1994 by the now late Sydney J. Barholomew (also designed the Mutt Cutt’s Van, bicycle set for Pee Wee’s Playhouse, etc). Of the two original bikes – one was gifted to Planet Hollywood, and this one was given to the transportation coordinator from the film(Gordie Merrick) by the Farrelly Brothers.

I acquired the bike directly from Gordie Merrick(listed on IDMB & movie credits for D&D) who had it in storage for the past few decades. I spent a little over a year slowly restoring it back to original condition. This bike in particular was used in all the up-close riding scenes (see pics attached) with Jim Carrey & Jeff Daniels.

The frame of the mini bike was repainted to the original color. The bike is located in Houston, Texas, but the seller is willing to help with transporting the infamous vehicle to the buyer. You have until February 18 to get your best bid in and win this auction. An added bonus is that 10 percent of the proceeds go to the Best Friends Animal Society, which “works with animal lovers, shelters and rescue groups nationwide to bring about a time when there will be no more homeless pets.” If you miss out on this bike then you are one pathetic loser.