The Future Is NOW: World’s First Robot Designed To Bring You Beer From The Fridge

#Robots
BroBible may earn a commission if you buy a product or service via links in this article.
by Cass AndersonJanuary 10, 2018 9:15 am 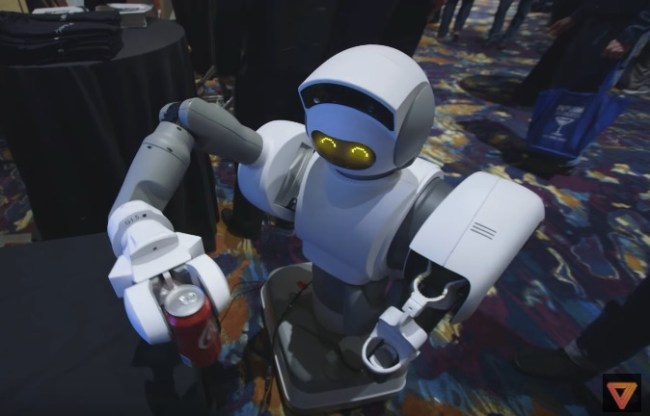 Growing up and seeing old re-runs of The Jetsons cartoons on TV I was led to believe that ‘the future’ meant we would all have robot butlers living in our homes. Thanks to the roboticists at Aeolus Robotics we are one step closer to living in that reality.

Aeolus Robotics debuted their new consumer robot at CES 2018 and Paul Miller from The Verge was able to see this revolutionary device in action. This is the first ever consumer robot which is capable of retrieving beer from the fridge. Because this robot is showing off its skills on the CES 2018 show floor it can’t exactly be carrying around Heady Topper IPAs so it actually retrieves a can of Coke, but you get the point:

Here’s what Paul Miller from The Verge had to say about this robot’s function:

Aeolus is supposed to be a general household helper. It can supposedly recognize “thousands of items,” and wander around your home putting them back where they belong. If you lose your glasses, Aeolus could help you find them. It also has a modular attachment on its left side that can grip a vacuum cleaner or a broom for cleaning jobs. There’s even a chair-moving function. (via)

This is ‘the future’ I expected to be living in by now. One in which we’ve got robots to perform all of the trivial daily functions that require zero brain power like brushing your teeth and refilling your dog’s water bowl. This is the future I want to be living in, one where we can send the robot on a beer run so there’s no time break in the beer pong game.