The State Of Marijuana — A 4/20 Experience In Colorado 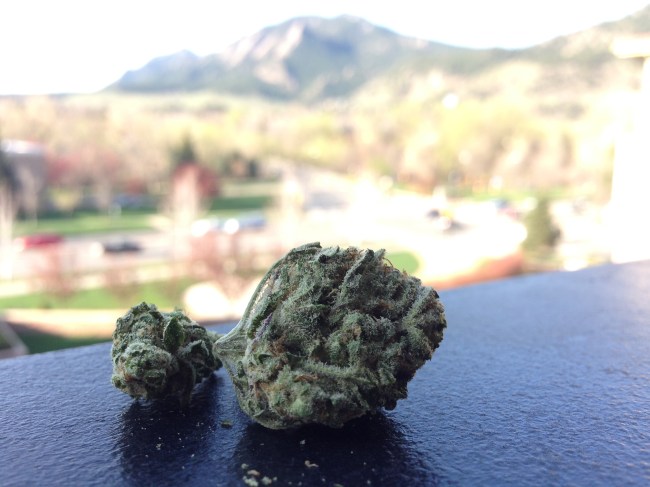 The idea started simply enough, I posited to my colleague Chris ‘we should go to Colorado for the first ever legalized 4/20, that’d be interesting, right?’ If you’re not familiar with 4/20, it’s basically to stoners what Mardi Gras and St. Patrick’s Day are to drinkers. It’s their chance to go all out.

So, I thought, why not go experience the first ever massive celebration of legalized marijuana firsthand? Colorado’s gorgeous, and though I rarely ever smoke myself, I’m not opposed to it and have been known to enjoy hitting the peace pipe from time to time back in the day. My next move was to reach out to High Times, the authority in all things marijuana related, and try to secure a press pass to their Cannabis Cup, the world’s premier cannabis festival. 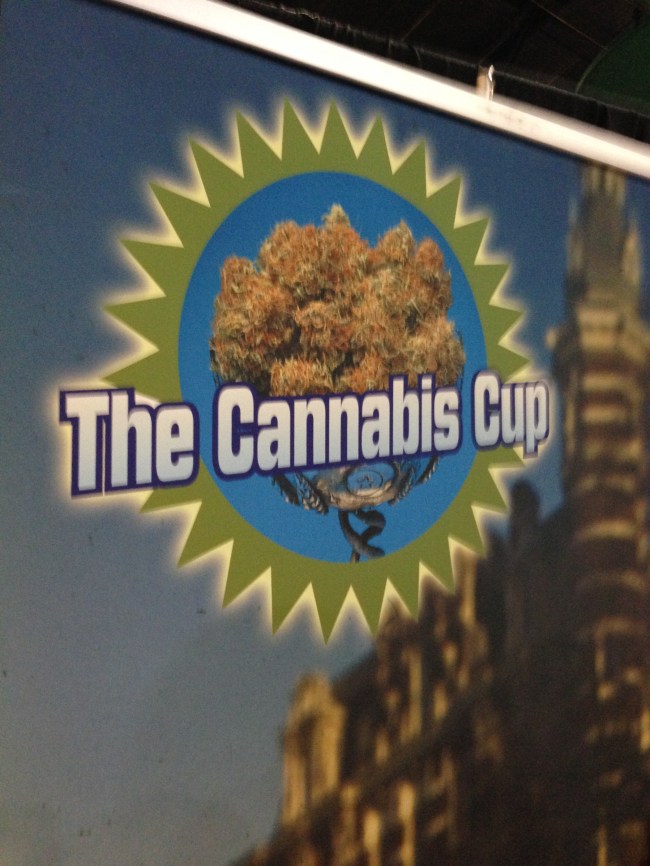 So I did a little homework on the dispensary scene of Boulder, Co, where we’d be staying, and what to expect at the Cannabis Cup, but other than that sort of left everything up in the air. I didn’t do any advance smoking (or eating of the marijuana edibles) to try and boost up my tolerance….and off we went….

Welcome to Boulder indeed! Let me start by saying that my biggest takeaway from this trip is that I’ll never, under any circumstances, get into the ‘weed culture’ that I saw at the Cannabis Cup. I won’t dare begin to claim I know even a fraction of everything there is to know about stoner culture in Colorado after just one 4/20 weekend, but I do know for a fact that the people running the recreational marijuana dispensaries are the ones who should be the face of the movement to legalize weed across the country. 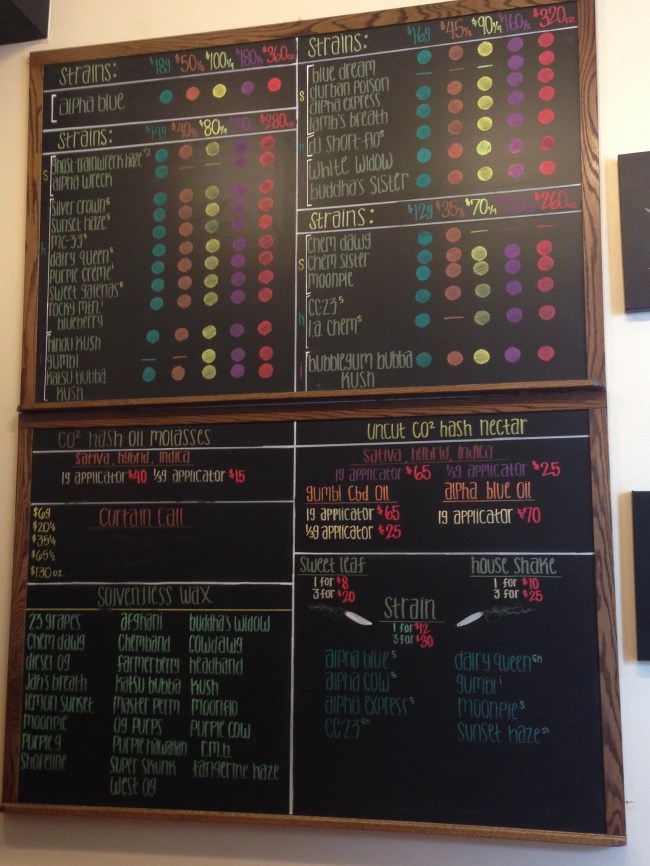 Just look at that menu, what the f*ck was someone like me supposed to do with that menu? It might as well be a sanskrit. Enter my ‘budtender,’ which turned out to be the greatest phrase I learned all weekend. Essentially a budtender is your bartender of weed, except that a budtender actually cares about you, and is there to help you make informed decisions. These budtenders should be the face of legalized marijuana, because they’re informed, and recognize the consequences of sending someone like myself out into the world with a bounty of weed that is way too strong and which will lead to disastrous consequences.

The recreational dispensary we went to in Boulder was The Farm, and had just this month made the switch from medicinal to recreational. But the scientific like approach to budtending was obviously still evident. My budtender asked me things such as: how often do you smoke? Do you plan on smoking during the day, or night? What sort of high are you looking for? The giggles? Body high? Do you want to smoke or are you looking for edibles? What sort of flavors are you in to?

The dude was informed, and I truly dug that about him. If you’re going to deal with something as taboo as legalized marijuana, don’t be like the girl who checked us into a dispensary who’s eyes were bloodshot and could barely manage a smile. By the way, I forgot to mention when you go to the dispensary, as an out-of-state resident you give them your ID. Which they then swipe to ensure it’s legal, then give you a poker chip with an assigned number, and as an out-of-stater, you’re only allowed to buy up to half an ounce equivalent. So half an ounce, or the equivalent grams/milligrams of edibles.

So, after a truly wonderful consultation with my budtender, here’s what we bought! 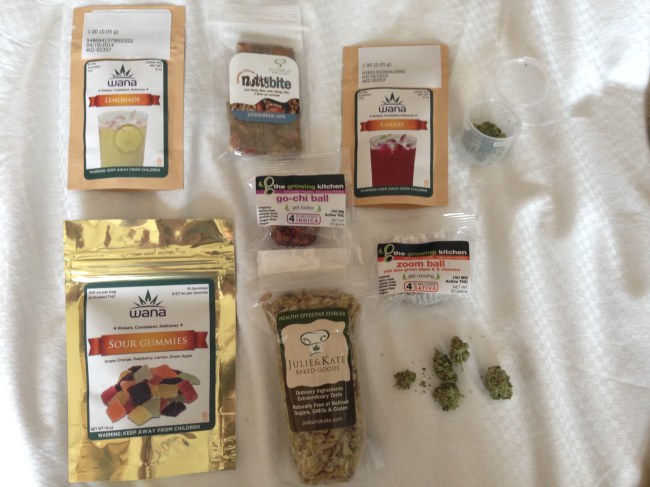 Really, the interesting stories ended there. My experience at the High Times Cannabis Cup was analogous to something you’d see at Woodstock ’99, when there were mud riots, or at the Gathering of the Juggalos.

This was the entrance to the Cannabis Cup. I mean, how are the flickering lights supposed to help my high? 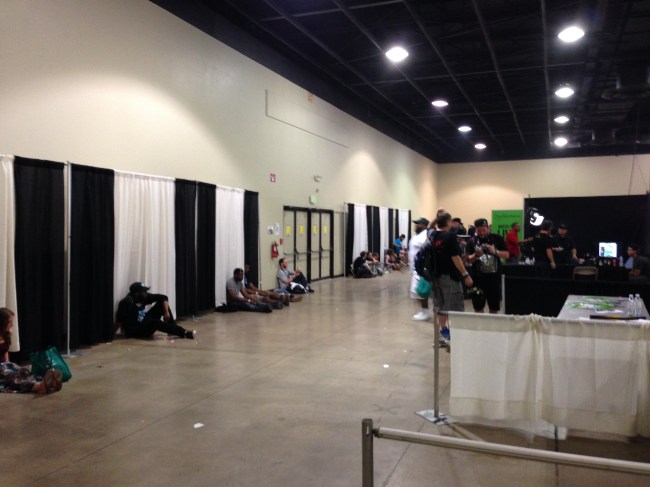 And though I’ve been a HUGE fan of the High Times magazine ever since I first discovered it (I’m truly fascinated by high-quality marijuana, the same way I appreciate orchids and exotic plants), this art installation was lacking a bit in execution… 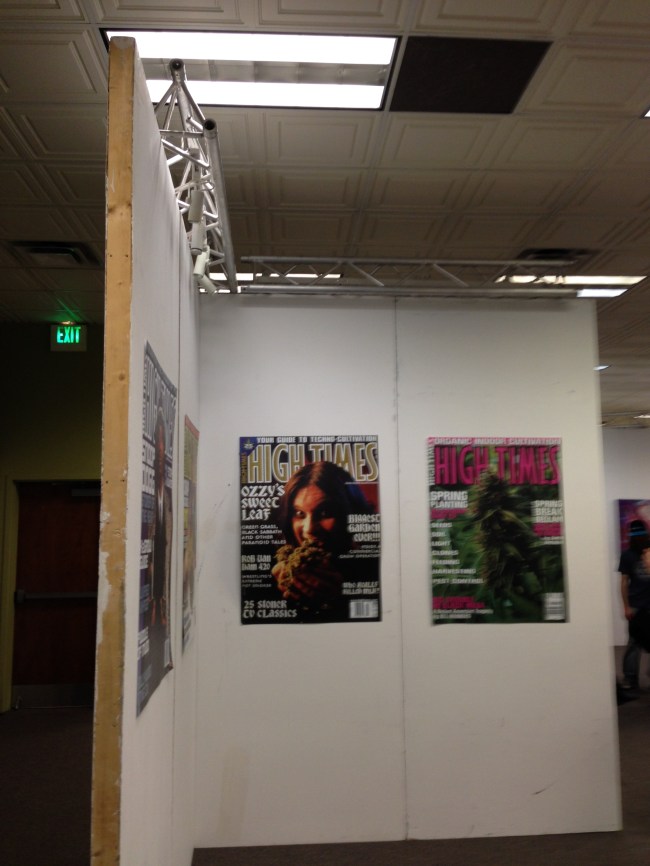 And the attendees of the festival//convention weren’t too enthused to be there at 2pm on 4/20, nor did the panel speakers think it was necessary to take their sunglasses off indoors.

My point of the last few photos being that it was a night and day experience from the clean atmosphere and professionalism I experienced at The Farm dispensary in Boulder. If you’re going to be the champions of legalized marijuana, do it right. And the dispensaries seemed to grasp that. **I feel it’s necessary to back peddle a bit and reiterate that I was only there a few days and only witnessed a fraction of the legalized/recreational marijuana culture, so my knowledge is slim, and I can only report what I saw**

But on to the actual weed itself…. 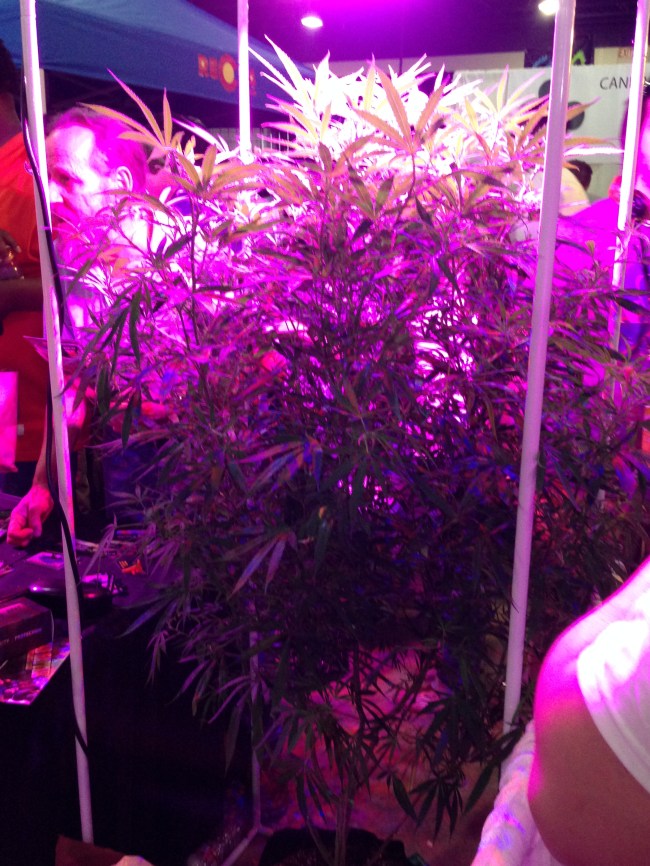 So lifetime now I’ve been to 70+ Phish shows, which some may think is as asinine number, but to a Phish fan like myself it’s really just peanuts compared to other Phish fans. I say that to put into context how often I’m around marijuana, which is many times a year, but even though I’m close to it I rarely smoke. Smoking’s just not my thing. I enjoyed it when I was a little younger, but got a point where I started not enjoying it anymore, getting minor panic attacks, I was just done with it. The marijuana strain pictured above, Colorado Blueberry Kush, made me a believer again that smoking weed can be extremely pleasant and enjoyable. The blueberry kush was a ‘day or night’ recommendation from my budtender, and it wasn’t overpowering, and I’d truly recommend it to anybody. 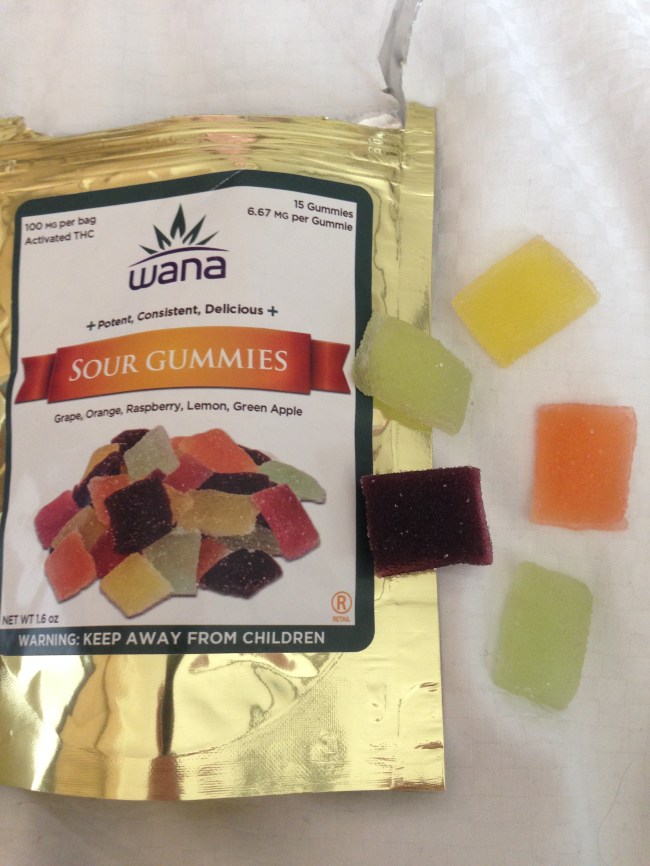 These insanely delicious edible gummies from Wana were everything I ever dreamed an edible could be. As a connoisseur of gummy candies, these were honestly more delicious than anything I’d ever tasted, the caveat being they ALSO had marijuana’s THC in them, 6.67mg per gummy to be exact. My budtender suggested I start by only eating one, given my low tolerance, so I did, and it was tremendous. I’d eat one in the morning, one in the evening, one before bed (and I’d sleep like a f*cking KING). I should have tried to bring some of these back with me (yes, I know that’s extremely illegal), because I’ve been losing sleep at night thinking about how wonderful sleep was when I still had these.

***IMPORTANT*** One major thing we learned on this trip is that all edibles are not created equal, in terms of the milligrams of THC, and you better be DAMN WELL SURE to read the label before taking an entire one or else you might lose an entire day of vacation. 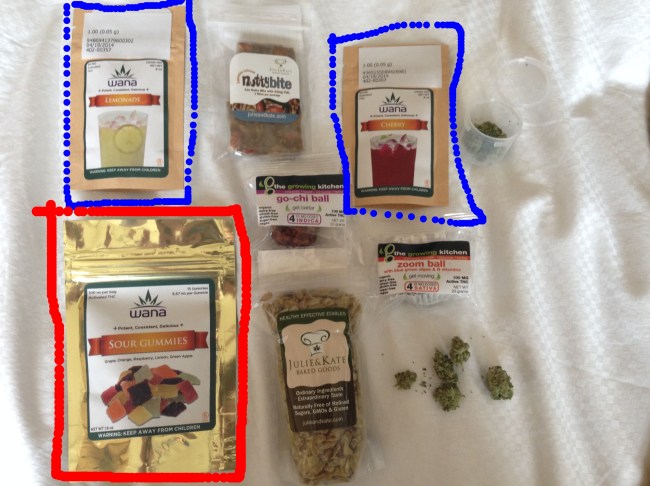 As you can see in the pic above if you look closesly in the teas vs. the gummies picture that all products are not created equal. In terms of THC content, one packet of tea = 7.5 gummies. The 3rd member of our 4/20 trip didn’t think to read the label before drinking the entire packet of tea.

I lose the picture of me and my fiance hiking up to the Flatirons in Boulder, CO…Unfortunately, we never made it past the tree-line, because of that f*cking tea, and how strong it is. Instead, we had to turn around and go eat a massive amount and let our buddy sleep the entire day because he’d taken too much. Dude should have listened to his budtender. Guys: ALWAYS LISTEN TO YOUR BUDTENDERS.

And that about concludes the experience. Like I said earlier, the people running the dispensaries and the budtenders exceeded all of my expectations of professionalism, and left me with the certainty that they should be the face of legalized marijuana.

I didn’t leave this weekend with a profound notion of what the Nation’s policy on marijuana legalization should be. Because aside from us seeking out the dispensaries and the legal-weed-experience, it really wasn’t ever thrown in your face. 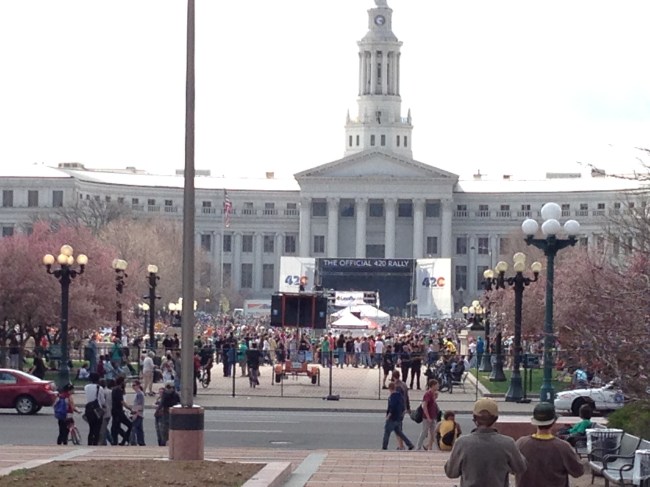 And shame on me for not finding out what they were actually rallying about! In my mind, I’m sitting on the sidelines judging these crusty a$$ stoners for rallying around something that’s already been legalized. I guess I didn’t get the memo.

But other than that experience, the weed culture was never really thrown in my face. Other than the flight to Denver, which was rowdier than any flight to Vegas or spring break, full of loud stoners who just “WANT TO SMOKE SOME F*CKING LEGAL WEED”…that quote came from some chick who’s nickname, according to her, is ‘boobs.’ Those people, the people lighting up at 4:20 on 4/20 getting ticketed for smoking in places it’s not legal outdoors, they are not going to get marijuana legalized nationwide anytime soon. They’re just shoving it in your face, and to what end? Yes, we get it, you LOVE weed, and it’s LEGAl. But frankly, I don’t give a shit what you love, I only like weed and I’m fully aware that it’s legal.

Will I spend the $$$$ to go back to Colorado just to experience weed? Hell no. I’ll go back if there’s another reason to visit Colorado. But this is where I see the ‘state of legalization’ heading. Geographically we have Washington state & Colorado fully legalized, and the capital of Maine claiming to have legalized even though it’s complete bullshit. Nevertheless, they’re next in line for legalization, and then they have the entire east coast (and the populous northeast) driving/flying up north for weed tourism. It will be great for the states that have legalized, because they’ll make a killing in the taxation, eventually the rest of the nation’s states will fall in line, and the South will begrudgingly legalize last. And that folks is where it’s all headed.

Here are some more photos to round out the overall experience, enjoy.

Plants at the Cannabis Cup expo…Why put the purple lights on it just to make it look cooler?

My morning and evening smoking spot from the hotel: 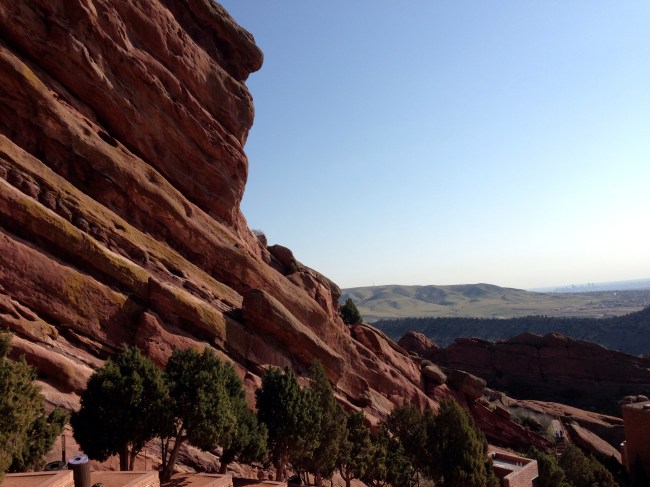