Everything You Need To Know To Survive A Bar Crawl 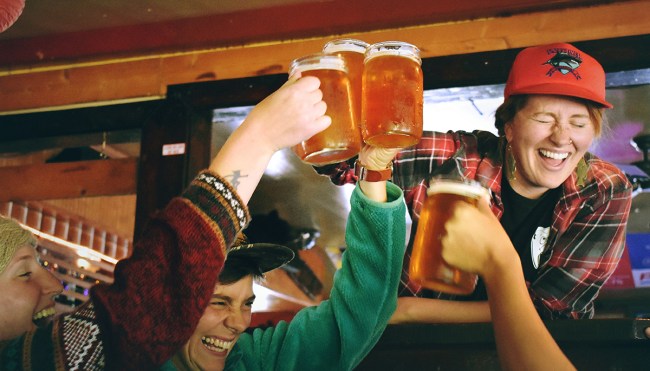 Bar crawls are almost always a good time. You get to hang out with good friends, you get to meet a lot of new people and hey, you get to get drunk, which let’s face it helps to make anything a good time.

The only problem is that a bar crawl can turn into a logistical nightmare, with people getting lost, separated from their friends, chasing each other down all night and wandering all alone, drunk in the middle of the street like a hobo.

You don’t have to be Martha Stewart with OCD here, but it’s a good idea to have a general game plan. Know which bars you plan to hit and at least have a vague order of how you’re going to hit them. That way, if things start to unravel along the way, everybody in your group will at least have a general idea of where to go to try to get things back on track.

Of course, even the best game plans fall apart at the bottom of a bottle, so it might be a good idea to have one of your friends serve as a sort of designated babysitter; someone who’s okay with hanging out all night and having fun without getting wasted and won’t mind keeping the rest of you from wandering off alone and being hauled in by the cops after they find you missing your pants and incoherently harassing the sandwich makers at Subway.

This one is very important. You don’t want to be the guy who blows his wad at the very first stop and gets too drunk to continue.

That’s no fun for anyone. Your friends either have to decide to stay behind with you, which ruins their night, or leave you in the care of an annoyed bartender who will probably spend all night fantasizing about smashing a bottle upside your head and then dumping your body in the dumpster in the alley out back.

Sure, doing a line of tequila shooters might sound like a fun way to start off the night, but this is a marathon, not a sprint and you don’t want to be the dude cramping up before the end of the first mile, do you?

7. Don’t Get Bogged Down

The best way to pace yourself is to make sure you don’t get bogged down in one bar for too long. You don’t want to park yourself on a stool—or worse, in a booth—because pretty soon you won’t want to get up. You’ll just want to sit there and drink.

The thing about that is that it’s hard to gauge how drunk you really are without moving around a lot. Just remember that you’re there to get experience lots of different bars, not just one. Look at it like casual dating. You’re just looking for a good time, not trying to get married.

You don’t want to get bogged down, but perhaps even more importantly, you don’t want to be in such a hurry to get to the next bar that you don’t take the time to relax a bit and enjoy the one you’re already in. That’s a surefire way to kill a bar crawl.

It’s a delicate balancing act. You want to experience as many bars as possible, but you want to actually experience them, not feel like a tourist on some walking tour of the city’s pubs. It’s important to be in the moment while maintaining an agenda for the rest of the night in the back of your head.

5. Have an Exit Strategy

Before each bar, talk about the general plan. Figure out how long you want to stay, how much you want to drink, and maybe even coordinate some signals that you can shoot each other across a crowded room to let each other know that it’s time to move on.

Again, though, it’s a balancing act. You don’t want to be too specific or else you’ll just spend the whole time staring at your watch. That’s too rigid and nobody will have any fun. Leave some wiggle room so that you can get a feel for each place; some will be better than others, and you’ll want to stay longer in some places—that way, if you find someone cool you want to get to know better, you can manage that without feeling like you’re speed dating.

So have an exit strategy before you go in, but keep it loose.

4. Give Your Friends Their Space

A common mistake in a bar crawl is running around in one big herd. You look like a gang of tourists or scared gazelles huddling together for protection.

Spread out, talk to new people, and don’t worry too much if one of your friends gets bored and splits early for the next place. That’s what the game plan is for. Again, don’t be afraid to be in the moment.

3. Don’t Get Too Separated

As important as giving each other space is, the worst thing you can do in a bar crawl is to get too separated. Once this happens, the whole night becomes a frustrating exercise in phone tag and hide and seek.

Give each other space to do your own thing, but keep one eye out for each other too. This is where signals come into play and a game plan and exit strategy become vitally important.

A good idea is to never let yourself become separated by more than one bar at a time. So if you do see a friend split early for the next place, you don’t have to rush out after him but remind yourself to wrap things up at the current place sooner rather than later.

This is a general rule of thumb whenever you’re drinking but it’s especially applicable in a bar crawl, where different bars have different specialties and different deals. Do not mix beer with liquor. Just don’t do it.

Unless, of course, you plan on the world ending before you have to wake up the next morning. But even before then, mixing can have disastrous consequences. If you start off mixing, chances are you’ll be vomiting in the street before you even get to the last place on your crawl.

Everything that’s already been said takes a backseat to this one golden rule. Enjoy yourself. Everything else should be in service to that one thing.

All these other tips exist just to make sure that you get the maximum amount of enjoyment out of your crawl, and the moment any of them start to seem like work, it’s time to take a step back, relax and allow yourself to have fun.

Do not make this harder than it has to be. Just use common sense, keep these helpful hints in the back of your mind, remind yourself to have fun and you’ll be fine.