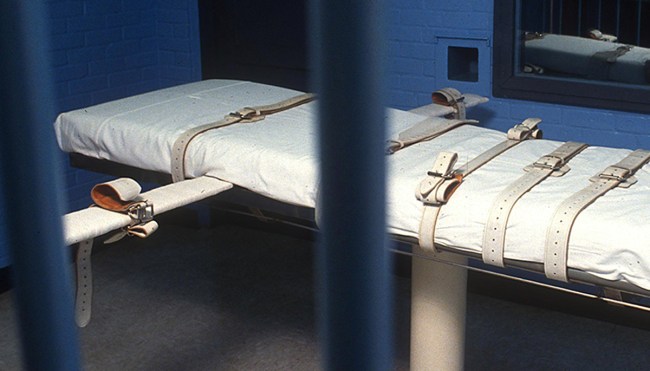 It’s safe to say the death penalty is a fairly controversial punishment, and unlike many hot-button issues, it’s pretty easy to understand where both sides are coming from.

There are some people who’ve committed unspeakably heinous crimes and subjected their victims to unimaginable horrors to a point where execution seems like a slap on the wrist; personifications of pure evil who make you wish there was a way to make an exception for the ban on “cruel and unusual punishments” found in the Bill of Rights.

On the other hand, there are plenty of critics who’d argue the death penalty is an inherently cruel and unusual punishment. You may disagree, but the fact that close to 200 people in the United States have been exonerated after being sent to death row since the 1970s is a fairly disturbing statistic that makes it difficult to deny the system is flawed.

The divisive nature of capital punishment is reflected on a national level: as things currently stand, 23 states have outlawed the practice while 27 others (in addition to the federal government) have allowed the death penalty to remain on the table.

Now, life on death row is certainly anything but glamorous, but I’d wager there are plenty of death penalty proponents who aren’t a fan of the conciliatory amenity that’s typically offered to the condemned before their fatal sentence is officially enacted: the last meal.

Allowing inmates to request certain items for their last meal is a tradition that can trace its roots back to Texas, which first started allowing prisoners to specify their ideal lineup in the 1920s (although the state took a new approach after a convicted murder declined to take a single bite of the massive spread he asked for in 2011).

You’ve probably pondered this hypothetical scenario at some point, and most of the people who are faced with the morbid reality where they actually have to decide what their last meal will be have plenty of time to think about it—including those that comprise this list of people who ultimately settled on a pretty bizarre menu.

The fact that Velma Barfield was convicted of killing seven people is a pretty clear sign she was sick in the head, and nothing drives that point home than the decision to specifically ask for Cheez Doodles instead of at least going with Cheetos.

If you’re going to take up smoking, I supposed the best time to do it would be moments before your death.

Harris originally asked for Dominos Pizza before switching to Tombstone, which I guess is a bit more appropriate considering the situation.

There is no better way to prove that you’re completely insane than asking for a single olive as your last meal.

Grasso ordered a few other items, but the room temperature SpaghettiOs definitely stand out the most. Rumor has it that Grasso complained the SpaghettiOs were too hot when they brought him the meal. I guess they assumed he has time to wait for it to cool down?

Crime: Seven murders spanning from November 1989 to November 1990
Year Of Execution: 2002
Meal: A cup of coffee

Wuornos’ primary claim to fame is being the serial killer played by a virtually unrecognizable Charlize Theron in Monster, but this wild move has to be a close second.

Crime: Rape and capital murder
Year Of Execution: 1987
Meal: A cup of tea and six cookies

I know these killers are so precise and calculated, but why limit yourself to just six cookies? This is your last meal. Get 30 and that way you know you’ll have more than enough.

Crime: Murder during a robbery inside the International Trade Center in Houston.
Year Of Execution: 1990
Meal: Dirt

Smith asked for dirt in order to do a voodoo ritual before his execution. Since it wasn’t on the list of approved foods he had to settle for what I assume was the closest thing they had to dirt: yogurt. Imagine how that conversation went down.

Prison: What do you want for your last meal?
Smith: Dirt so I can perform a voodoo ritual.
Prison: Um, no we aren’t doing that. How about yogurt?
Smith: Yeah that works too.

I guess you take what you can get.

You may laugh, but this is actually a brilliant idea. He thought of the longest movie possible and asked for it so he could stretch this meal out as long as possible.

I don’t blame him. I would ask for the director’s cut and then for the commentary tracks and all those stupid featurettes that no one else in the world would ever want to see.

Based on what we know about his political leanings, I’m surprised the man behind the Oklahoma City bombing didn’t go with vanilla.

Crime: Murder after pretending to be selling marijuana and then shooting both of his victims with a shotgun.
Year Of Execution: 2001
Meal: A bag of Jolly Ranchers

If they really wanted to make his last day on earth completely miserable, the guards could have gone through and put nothing but watermelon Jolly Ranchers in the bag.

He opens it up, rummages around a little, and yells, “Just when I thought this day couldn’t get ANY WORSE!”

See this is how you do it. Who cares if you only eat 1/3 of your food? You’re getting ready to die. You’re not concerned with world hunger or future generations. Who cares about love handles or caloric intake?

Shovel that slop in your mouth and let the execution room janitor worry about the mess.

Crime: Murder of a woman he met online as well as her former boyfriend.
Year Of Execution: 2001
Meal: He asked for his last meal to remain secret and never be revealed

I’m certainly not looking forward to the day when I draw my final breath, but I’m really hoping I’ll be able to pull off the plan I have in place for when it arrives: laying in a bed surrounded by loved ones and uttering the words, “There is $10 million in the…” and moving on.

As a result, I can understand why Elliott did everything in his power to go out as mysteriously as possible.