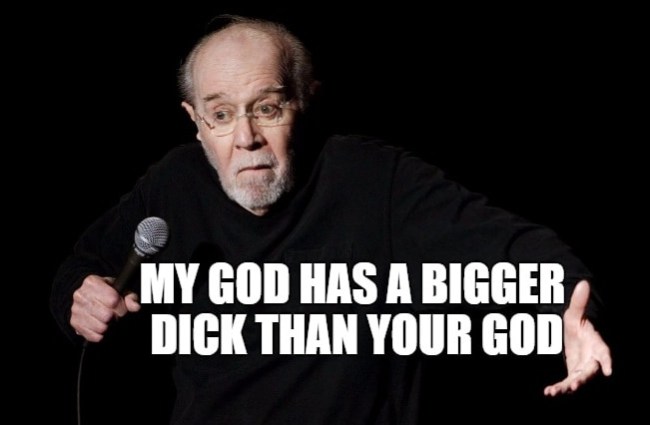 There are said to be over 4,200 religions in the world including the Church of the Flying Spaghetti Monster, Jediism, Pastafarianism, Scientology, and some even worship Joe Pesci. There are reports that 84% of the world practices one of those 4,200 religions, but analysis shows that the billions of people who are religious are less intelligent than atheists.

Miron Zuckerman, Jordan Silberman, and Judith A. Hall found that there was a negative correlation between those that follow religious beliefs and intelligence.

It was stronger for religious beliefs than religious behavior. In effect, people who believe religious teachings as opposed to those practicing religions.

Religiosity was defined as “the degree of involvement in some or all facets of religion.” This included beliefs in supernatural agents and “costly commitments to these agents” such as an offering of property as a sacrifice. Another ‘facet’ is participating in communal rituals, such as going to church, and “lower existential anxieties such as death due to a belief in supernatural agents” (i.e. being less scared of death because you believe you’re going to heaven).

According to the study, there are three major reasons why atheists are more intelligent to believers of faith:

The study found that more intelligent people thought analytically, which leads to lower religiosity. The researchers say that an intelligent person “knows better” than to blindly accept beliefs and realize there is a scientific way to accept beliefs without using religion as a vehicle.

The authors of the study believe that the divide between religious people and atheists was strongest amongst university students because that’s the time when people are exposed to different ideas and beliefs. Those who come from a very religious household are going to be less accepting of ideas, cultures, and personalities that are foreign to them.

“Using analytic (as opposed to intuitive) thinking, more intelligent college students may be more likely to eschew religion,” the study said. “If atheism is disapproved of at home, higher intelligence may facilitate resistance to conformity pressure.”

During college years, students tend to lose their beliefs or get more religious during this time, the study suggests. The researchers concluded that “the self-exploration that typifies emerging adulthood and that is often observed in students as the separation from home and the exposure to a context that encourages questioning may allow intelligence to impact religious beliefs.”

In another study, researchers from the Ulster Institute for Social Research and Rotterdam University attempted to determine whether religion was an instinct or something that evolved.

The team created a model, called the Intelligence-Mismatch Association Model, which tries to explain why intelligence seems to be negatively associated with being religious. Their model is based on the ideas of evolutionary psychologist Satoshi Kanazawa’s Savanna-IQ Principle.

This principle indicates that human behavior will always be somehow anchored in the environment in which their ancestors developed. The researchers argue that religion should be seen as a separate evolved domain or instinct, whereas intelligence allows people to rise above their instincts. Rising above instincts is advantageous because it helps people to solve problems.

“If religion is an evolved domain then it is an instinct, and intelligence – in rationally solving problems – can be understood as involving overcoming instinct and being intellectually curious and thus open to non-instinctive possibilities,” said Edward Dutton, co-lead author of the study.

The study, which is published in Evolutionary Psychological Science, noted that religion should be seen as a “separate evolved domain or instinct, whereas intelligence allows people to rise above their instincts.”

“If religion is indeed an evolved domain – an instinct – then it will become heightened at times of stress, when people are inclined to act instinctively, and there is clear evidence for this,” Dutton stated.

If religion is instinctual, that may explain why people embrace religion when faced with their own mortality to help alleviate the stress of their impending death.

The researchers believe that people who are less instinctual are better problem solvers and more analytical, and have less religiosity.