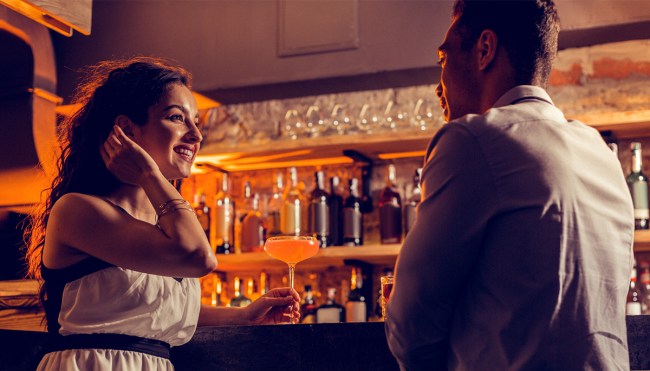 While there are certainly some exceptions, bartenders are sober while doing a job that frequently involves serving a room packed with patrons drinking themselves into a stupor.

This means that bartenders get to overhear all of the drunken chatter that the drunkards themselves are likely to forget (I envy bartenders for getting to remember this stuff because I forget half the stuff that comes out of my mouth after I’ve been hitting the bottle).

That includes many of the priceless lines people deployed while trying to kickstart a conversation with a prospective romantic partner. In many cases, those attempts can back up spectacularly, but there are some exceptions to the rule in the form of these ones seared into the minds of the bartenders who shared stories concerning the best pick up lines they’ve ever heard in an AskReddit thread.

The Best Pick Up Lines you Can Use (According To Bartenders)

DaveNay:
We were talking about cooking for one, and she wrote out a recipe on a napkin. I took it and thanked her. I then asked her “Who should I call if I have any questions when making this?” Then she flipped it over and wrote her number on the other side.
We were married three years later. I still have that napkin.

LobsterGarden:
Homeless man who’d wander in on occasion: “hey miss, could you spare a couple quarters? …so I can call you later?”

theworriedgypsy:
I work in a bar. This is the opposite of a smooth pick up line, but it still worked. I overheard a guy mess up asking a girl out once by asking her is she “Wanted to go eat a movie sometime?”. Her response was, “Sure! I always watch what I eat.” I laughed and there was merriment and a good time was had by all….

aordsao:
I am a bartender. I met my husband at work, he was a patron. The night of our first date, he said: “do you wanna come over and watch half a movie?”

e3kb0m63r:
A regular would start a conversation with a girl, wait for the second laugh out of her and then drop the magic…
“When I text you goodnight later, what phone number should I use?”
Cue the third laugh and him getting her number.
Every.
Time.

MajorMustard:
I was a bartender in a college town. The best one I heard was when a guy approached a girl at the bar;
guy: “hey, looks like you dropped something!”
girl: ” really? What?”
guy “your standards, hi I’m Mike”
Girl laughed so hard she spilled her drink and he bought her a new one.

patm516:
I work at a bar in Long Beach NY (male)
A female customer was giving me advice on how to hit on my bartender co worker (female) who is a very close friend of mine. She kept feeding me “adorable” things to say to my friend because she thought we looked cute together. I thanked her and took one step toward my friend then turned back to her and repeated it all back. She took the bait and it landed me back at her place.

pigiron5:
My first month of bartending I had a girl quickly finish 2 cosmos. I came up and asked her how she was doing.
“I’d have another one, but you’d have to take me home”
Her group of friends got a nice laugh when I blushed.

PM_ME_YOUR_BEE_SYRUP:
I saw a drinking guy sit next to a woman at the bar and say, “you mind if I sit here and hit on you for a while.”
That’s my go to pick up line other than Taco Bell hot sauce sayings.

Meggarea:
I once saw a girl go up to a fellow in a goth club and ask him if he washed his clothes in Windex. He was supposed to say no so she could say, “That’s weird, cause I sure can see myself in your pants!”
Trouble was, he was wearing patent leather pants, and excitedly answered “Yes! Aren’t they shiny?” Her line was ruined, but they left together anyway.

8023root:
I am not a bartender but i saw this happen at a bar. I was sitting at a table with two of my friends, one girl, one guy. Some guy i have never seen before comes over, places three beers, one in front of each of us and proceeds to start talking to my female friend. I assumed it was just one of her friends i had never met. It took me a solid five minutes to figure out this guy was a stranger and then i was blown away with how smooth of a move that was.

king_of_chardonnay:
Way late to the party but heard this one while closing down a couple weeks back.
“Come on, lets go back to my place, I’ll make you a quesadilla.”
This girl had been swatting guys away like flies all night but that one worked out.

CantankerousOctopus:
A girl once bet that if she could fit an entire one of the cupcakes we sold in her mouth without using her hands, I would have to give it to her for free. She did and I did. I was so impressed, I got her a free drink too. 6 years later, we’re still together eating cupcakes and shit.

Tacobaee:
Not myself but my bartender relief, One night her friends come in with this guy and they get introduced but not in the “hey this is blah blah” and try to hook them up way, I guess they were just out with him. Anyways, they all closed down the bar (as her friends normally do) and they start to leave while she cleans up the bar. She see’s he left his phone so she runs out and gives it to him. Fast forward a few weeks and they come in and same thing happens. Well apparently he does it a 3rd time and she goes out and says something like “why do you keep forgetting your phone?!” And he said something along the lines of “well this is really the only alone time I get with you” A few dates and about a year later they’re happily married!

nothinbeatsagoodshit:
I saw two people hook up without even saying anything to each other. They were looking at each other from across the bar, he raised an eyebrow, she half smiled and nodded. They met in the middle and it was on. They didn’t even buy another drink. I know they did not know each other as the bloke is my cousin.

customcombos:
I bartend in a pub next to a college campus. I watched a guy say “that’s interesting” or “Oh, man, that’s crazy!” for a full hour and a half before leaving with a girl way out of his league.
Fake it till you make it, ladies and gentleman

executive313:
Not a bartender but I was sitting alone at a bar and heard a guy say this to the girl next to me “You look like a night of disappointment and week of dodged phone calls” I didnt hear the rest of the conversation but they left together.

midri:
Not a bartender but hooked up with one once. It was closing time and she said, “if you don’t work here or banging the staff, time to leave!” I leaned over and said, “I guess I’m staying.” With the confidence only a recently divorced man could have.
It worked, oddly enough

HURR1CANE_WR1ST:
Not a pick up line, but the smoothest thing I’ve seen from behind the mahogany. This guy was hitting on this girl at the end of the bar. She asked him, “you gonna bring me some roses?” and this man took two straws, a napkin, and a lighter and I shit you not made a rose with it. You bet your ass she left with him. Kudos, sir.

Swing and a miss….

general_dipwad:
Late response, but a guy sat down next to a woman at the bar. She was obviously not interested. Then he said “I may not be the best looking guy here, but I’m the only one talking to you. You should try lowering your standards. I just did.”
She threw her drink in his face and slapped him.

xray_anonymous:
Bar tended in college. Guy walked up to a girl at the bar, goes “Hi my name is Ben*, and I’m going to buy you drinks until you find me attractive.” Girl smiled and laughed and he asked what she would like to drink. She looked him over (he was already good looking), turned to me and said “In that case, I’ll have a water.” He definitely got it that night.

Last, but not least…

Detoxbyretox:
Saw an extremely drunk girl hanging out at the bar once. By hang out I mean she was leaning against the bar just to barely stay up. That’s when a drunk guy stumbles into her. I’d say that’s when their eyes met and they discovered true love, but it’s hard to say since they both had their eyes barely open and glossed over by slight alcohol poisoning. They both then grunted into each other’s general directions and proceeded to make out or eat each other’s faces off, can’t really tell.
TL;DR: True love is real.

Those are the best of the bunch, but if you’re thirsty for more, you can check out the entire thread for yourself