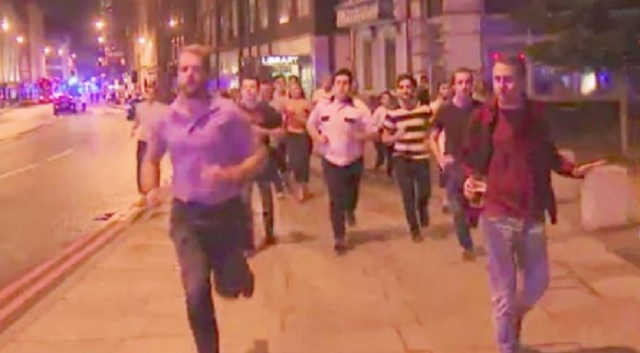 Last night, the UK was hit with their second terrorist attack in less than two weeks when three masked men drove a van into pedestrians on London Bridge before leaping out and launching a stabbing spree in nearby bars and restaurants. As of now seven people have died and 48 injured according to reports.

During the attack, one man photo’d unwilling to spill his beer became an unlikely symbol of defiance for many Brits and was said exemplify the “London Spirit”.

People fleeing #LondonBridge but the bloke on the right isn't spilling a drop. God Bless the Brits! pic.twitter.com/ceeaH0XxeX

People are hating on this bloke but after the scare he's had he'll bloody need that beer!

The people hating on this guy are blatantly NOT British. We find this a) funny and b) admirable.

Thank you. We've always used dark humour to get through crisises. Its a particular Brit quirk.

I am proud too,even a small thing like saving a drink shows that these bastards aren't going to win.

We have our prioritise – and pints trump terror!

Nah, this is London. We make jokes *as we run away*. You can bet someone next to him commented on that

He's following politicians advice not to let terror change the way we live.

Price of a drink in London… you better believe he ain't spilling that shit.

It's great to find a reason to laugh despite this horrific event!! Good on us and our British humour & values! 🏃🍺🤣

No this is exactly how we should be reacting. Humour has always gotten us Brits through the worst times. We need to keep it going.

This in a nutshell is why these sad fucks will never win ? Good on him 🇬🇧