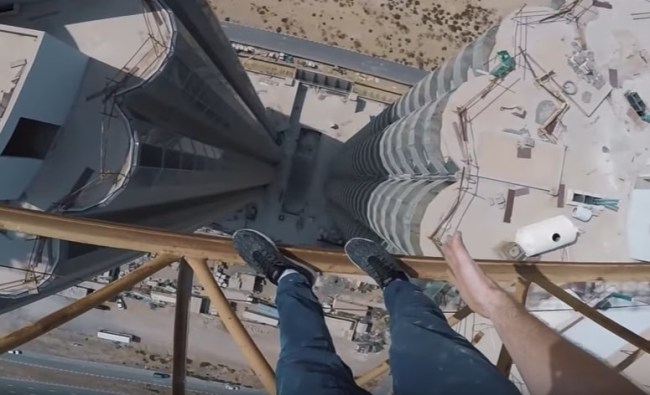 You should just go to the bathroom right now. Drop trou, take a warm seat on your porcelain throne, and get ready to build a log cabin because this video is shit-inducing. Daredevil James Kingston released a video titled “The craziest thing I’ve ever done!!” That is a pretty big fucking deal considering that JK has dangled over a river, climbed the Eifel Tower, and scaling the largest tower in the world.

In his latest deft-defying stunt Kingston walked on a crane between two towering skyscrapers. During his treacherous walk there is a moment of panic when the crane moves because of the wind. That’s a good time to be at the toilet.

“By far one of the craziest things I’ve ever done,” Kingston said. “For a long time I’ve been searching for a place where I can either jump or climb between two separate cranes and I finally found it!”

Why? Just why? Why can’t Jame Kingston just put on a virtual reality headset and pretend to be on top of a skyscraper like the rest of us?

Around the 7-minute mark Kingston makes his way to the crane.