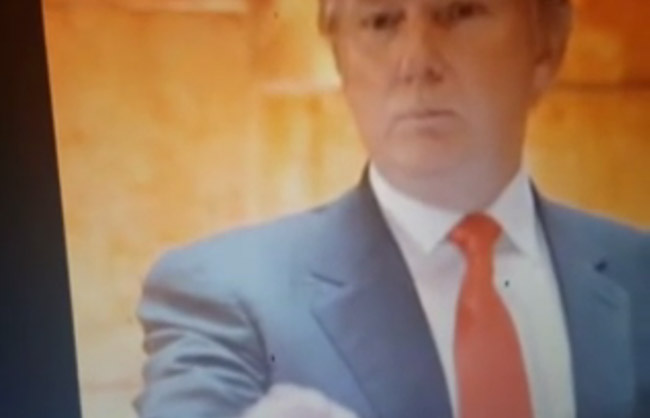 Before you go poo-pooing this conspiracy theory about Donald Trump and his family, just wait and hear the guy out. There’s a pretty good chance that it’s not even the craziest thing we’ve seen related to this past election.

“The Donald Trump you see now campaigning on stage for the election is a clone,” says servant. “He’s dead, his family and daughter and wife are fake mannequins — kids fake, dead. See the skin? It’s a mannequin.”

You have to admit, that’s a pretty good hook, right?

Okay, now you’ve got our attention, sir, what other evidence do can you present?

Death and Taxes breaks it down for us…

— The red ties Trump often wears are the mark of Satan, and the president frequently makes Masonic gestures. Thus, he is a demon.
— Melania’s eyes are “robotoid” eyes. They cannot belong to a real person, thus, she is a mannequin.
— Trump’s “yuge” pupils are also robotoid, which expose him as a clone. “Not normal.”
— Trump has been photographed making handgun gestures, which is actually a sign for devil horns. “It’s fake, cloned… all synthetics.”
— Melania and Trump’s son is also apparently a robotoid as well. Those eyes.

However, as we all know by now, none of that really matters since we are all going to get fucked by Planet X when it smashes into Earth later this year anyway.