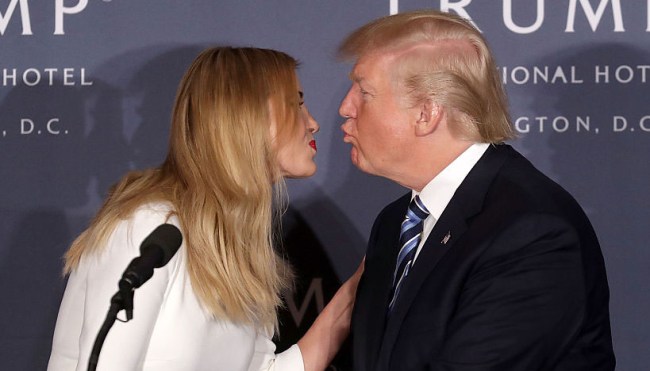 Despite tweeting over 34,000 times President-Elect Donald Trump still hasn’t quite got the Twitter machine mastered. Which is why, I suppose, it’s good that he will keep using his own account as opposed to the POTUS Twitter handle after he takes office.

Because, in what must have come as a major shock to Ivanka Majic of Brighton, England, Trump tagged her in a tweet Monday night instead of his daughter Ivanka Trump.

"@drgoodspine: @realDonaldTrump @Ivanka Trump is great, a woman with real character and class."

Donald’s daughter Ivanka’s Twitter account is @IvankaTrump. Ivanka Majic’s, the person who Trump tagged, is @Ivanka. Easy mistake, throwing in a space where one wasn’t needed, I suppose, right? Right?

Anyway, rather than just sitting there baffled as to why she was suddenly so popular on Twitter, Ivanka Majic decided to respond to the PEOTUS, telling CNN…

“The interesting thing about my being dragged into a Twitter conversation with Trump is that my politics are very different than his. It’s not every morning, well it’s never really, that I wake up and find that lots of international news agencies want to talk to me. I had many, many mentions. I normally try to reply politely, but I’m not going to be able to get back to everyone today.”

Here’s what Majic ended up tweeting back…

@realDonaldTrump @drgoodspine And you're a man with great responsibilities. May I suggest more care on Twitter and more time learning about #climatechange. pic.twitter.com/kBMEGZYtig

All of this naturally sent the rest of Twitter into a frenzy, as it often does…

@ivanka @drgoodspine @bravofoodawards The "wrong" Ivanka is the BEST Ivanka! The Ivanka the world needs! ❤✨

@realDonaldTrump @drgoodspine @ivanka Ivanka Majic from Brighton, England, is a wonderful woman. You're right. RIP her mentions though. pic.twitter.com/FH4f2KMOQU

@momtocoolkids @KikePatrol_ @kenklippenstein @realDonaldTrump @Twitter Her success will be unpresidented.

@ivanka … I am a huge @realDonaldTrump 🇺🇸 supporter. That said I applaud your response. Classy. Graceful. Point made.

These next four years are, at the very least, going to be very entertaining.