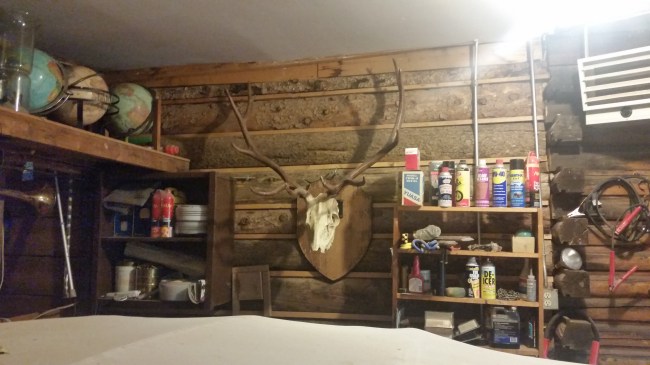 In 1964, a relatively unknown journalist traveled to Ketchum, Idaho to mull over what drew Ernest Hemingway to the tiny ski town of 700 people in his final days of life. The writer returned home not only with a story but a souvenir: A set of elk antlers. The prized horns, presumably shot by the man affectionately known to friends as Papa, were mounted above the entrance of the cabin where Hemingway committed suicide just three years earlier.

The young correspondent told no one about the theft. He didn’t prominently display the antlers at Owl Farm — his own secluded mountain home near Aspen, Colorado — like a conversation piece or bragging point for amusement of hundreds of guests who came to imbibe and shoot guns with him over the years. He wasn’t proud of his impulsive moment.

“He got caught up in the moment,” explained his widow, Anita, over the phone. “He had so much respect for Hemingway. He was actually very embarrassed by it.”

“Hunter started thinking about it more when he realized his place in American literature and history,” Anita continued. “He wrote that piece of paper that he stuck to the door (in Owl Farm) that’s still there that said ‘Please don’t steal from this home, by the management.’ That certainly played a role in him wanting to return it. You can’t expect people to behave well in your own home if you have a piece of stolen art.”

Thompson was 27 years old at the time and on assignment for a weekly national newspaper called The National Observer. Thompson had recently returned to the states after working as the South American correspondent in Rio de Janeiro, Brazil. The essay he filed for The Observer pondered if Hemingway returned to the Sun Valley area after living in various exotic locales because it was a last vestige of his youth and machismo. The piece, titled “What Lured Hemingway to Ketchum?” was republished in The Great Shark Hunt: Strange Tales from a Strange Time, an anthology of the Gonzo journalist’s magazine work up to 1980.

He knew something had gone wrong with both himself and his writing, and after a few days in Ketchum you get a feeling that he came here for exactly that reason. Because it was here, in the years just before and after World War II, that he came to hunt and ski and raise hell in the local pubs with Gary Cooper and Robert Taylor and all other celebrities who came to Sun Valley when it still loomed large on cafe society’s map of diversions.

Those were “the good years,” and Hemingway never got over the fact that they couldn’t last. He was here with his third wife in 1947, but then he settled in Cuba and 12 years went by before he came again- a different man this time, with yet another wife, Mary, and a different view of the world he had once been able “to see clear and as a whole.”

Ketchum was perhaps the only place in his world that had not changed radically since the good years. Europe had been completely transformed, Africa was in the process of drastic upheaval, and finally even Cuba blew up around him like a volcano. Castro’s educators taught the people that “Mr. Way” had been exploiting them, and he was in no mood in his old age to live with any more hostility than was necessary.

Only Ketchum seemed unchanged, and it was here that he decided to dig in. But there were changes here too; Sun Valley was no longer a glittering, celebrity-filled winter retreat for the rich and famous, but just another good ski resort in a tough league. “People were used to him here,” say Chuck Atkinson, owner of the Ketchum Motel. “They didn’t bother him and he was grateful for it. His favorite time was in the fall. We would go down to Shoshone for the pheasant shooting, or over river for some ducks. He was a fine shot, eve toward the end, when he was sick.”

In the article, Thompson refers to “Ernest Hemingway’s empty house, a comfortable looking chalet with a big pair of elk horns over the front door.” It’s not far fetched to imagine that those are the horns that Thompson swiped, then later hung in his garage at Owl Farm above the 1971 fire red Chevy Impala convertible dubbed “The Red Shark” , the same vehicle Thompson commandeered “somewhere around Barstow on the edge of the desert when the drugs began to take hold” in Fear and Loathing In Las Vegas.

Now, more than a decade removed from his death, Hunter S. Thompson’s mystique in American literature — both biographically and professionally — is eerily similar to Hemingway’s.

After 52 years, Hemingway’s antlers have finally returned to their rightful owners within the Hemingway family. Here’s how the reunion came about…

The best phone calls are the unexpected ones from friends you haven’t heard from in a while. Last Friday morning, I noticed a missed call and a voicemail from Anita Thompson.

“Hi, Brandon. I’m in Ketchum, Idaho with Steve Cohen. We’re returning the antler’s Hunter stole from Hemingway. I thought you might be interested in the story for BroBible. It’s very macho.”

Anita is my long-time mentor and former boss. In college, I worked for her as a research assistant for Ancient Gonzo Wisdom, a book of Hunter’s collected interviews over the decades. After I graduated from Penn State, I moved to Woody Creek to finish the research for the book and watch over Owl Farm while Anita was finishing a program at Columbia in New York. I lived in the “hot tub room,” once home to Hunter’s hot tub from the ’80s until his death in 2005.

We’ve stayed in touch after I left Colorado for New York.

Anita still lives at Owl Farm, where she runs The Gonzo Foundation. She also recently started a scholarship in her late husband’s name for veterans at Columbia University (…where Hunter briefly attended after being discharged from the Air Force) and runs a small, informal writers-in-residence program at Owl Farm. Additionally, she grows potatoes for her neighbors and hops for beer brewed at Flying Dog Brewery in Fredrick, Maryland, which started right up the road at George Stranahan’s Flying Dog Ranch.

She recently purchased Owl Farm from a trust so it can be her permanent residence. In the future, she hopes to turn the property — still very much so in tact from when Hunter lived there —  into a museum.

Owl Farm is home a small flock of peacocks. In the winter, herds of elk silently descend from the nearby mountain cliffs to the snowy fields in the backyard. It’s majestic. 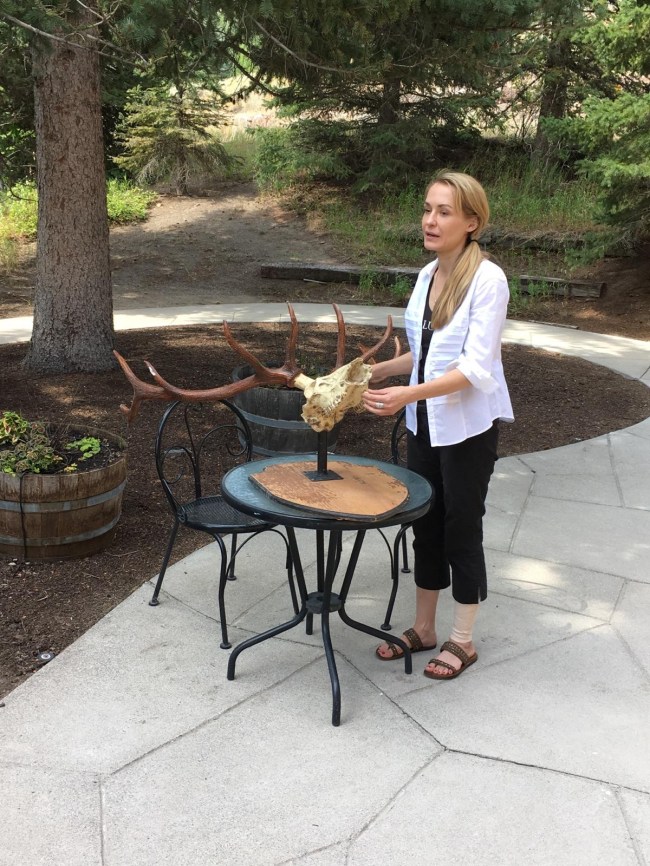 After a prolonged game of phone tag, we finally catch-up on the phone two days later.

“Do you remember the antlers? The things hanging above The Red Shark in the garage?” she asks.

“We planned to take a road trip and quietly return them, and not make a thing of it. Not even mention it, just return them. But we never did. We talked a bout a few times as a ‘wouldn’t it be neat if…’ thing because we assumed we would.”

On the first week of August, Anita loaded Hemingway’s stolen antlers in her Toyota Prius for the 11 hour drive north from Woody Creek to Ketchum.

“They couldn’t believe that the antlers fit in the Prius. They were taking pictures. And it’s kind of odd… Would someone like Hemingway have ever conceived of a Toyota Prius?”

For a few days, she stayed in Hemingway’s Ketchum house, noting how it can be a model for a future Hunter S. Thompson museum at Owl Farm:

“This year I got a hold of the family, which was a process because now there are many different parts of the Hemingway family. I was welcomed enthusiastically by the Hemingway Legacy Initiative staff. They’re amazing — they work with the community library and Hemingway Preserve, which is run by The Nature Conservatory.”

“What I felt most connected to is Mary (Hemingway’s widow), which was surprising to me. Her clothes are still hanging in the closet and everything is so frozen in time. You can also tell that she continued to live there after Ernest died. You just felt the love there, the love for him, even after he passed away.” 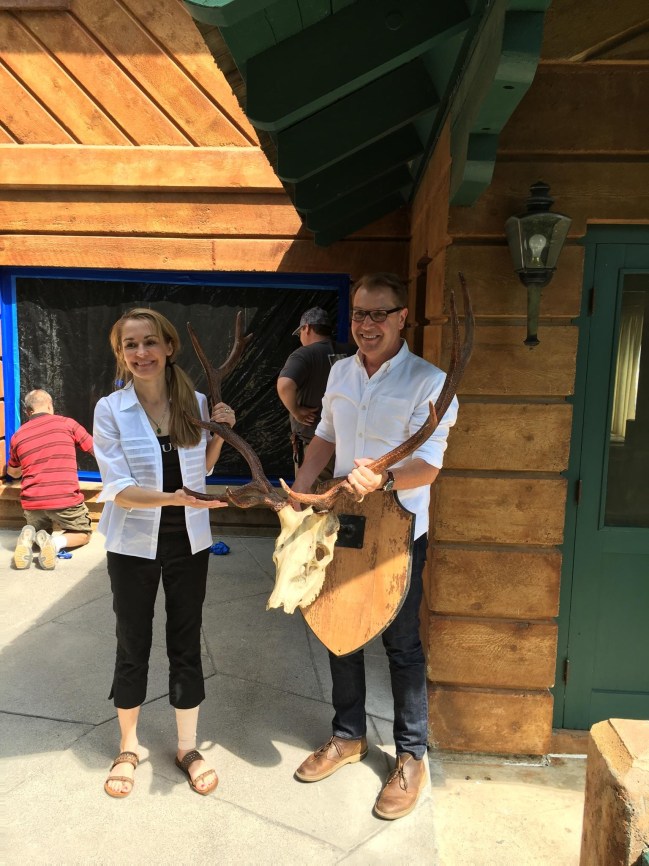 Anita says she connected with Mary almost right away.

“I didn’t feel sad at all. I felt inspired.”

How did the Hemingway family react when they found out that Hunter S. Thompson stole from Ernest and Mary? In Anita’s words, “they were warm and kind of tickled… they were so open and grateful, there was no weirdness.”

“Still, it’s something that was stolen from the home,” she adds.

“They were grateful to have them back. They had heard rumors. Sean Hemingway, the grandson, was the first family member that I’d heard from. He spoke with other Hemingway family members and he said that everyone agreed that he should have them. He lives in New York, where he curates a museum. So now that I’m back from Ketchum we’re actually shipping them to Sean.”

“It was fun to return them properly. It seemed like the right thing to do. I’m so glad I did it.”

I ask about her plans to transition Owl Farm into a museum for Hunter’s Gonzo tribe of fans and admirers. It’s more complicated than it seems — Owl Farm is Anita’s private residence. It’s also located on a narrow secluded road in Woody Creek where the neighbors aren’t exactly looking for tourists.

“I have to find a balance — How to make it available to some of the public like a private museum by appointment only and making a home. Since I bought Owl Farm, this will be my home until I die. I will move to the cabin or move the cabin to a different location a little further up on property.”

But she’s insistent that Owl Farm will always remain her home. “This is my only home, it’s not like it’s my second home or a vacation home, this is it. I’ll open it once in a while to people who love Hunter’s work by appointment-only basis.”

Besides just the good karma, she adds that the trip to stay at Hemingway’s house in Ketchum was valuable for research purposes.

“I live here because I love the peace and quiet. Seeing the way Mary did it is helpful. The staff at Hemingway’s house is so devoted to his work and I’m so glad to have that example of what I could have for Hunter’s museums in the future.”

And, most importantly, how a physical museum can spark interest in Hunter’s legacy to younger generations.

“Whenever people go to Hemingway’s Key West home, they’re very likely to buy one of his books and read his work. So every time someone reads Hemingway or one Hunter’s book, the world becomes a better place. The ultimate goal is to get people to read their work. However you do that, it doesn’t matter.”

“Getting someone to read one of their books for the first time is a blessing. I truly believe that.”