Is The Food At Hooters Actually Good? — A BroBible Discussion 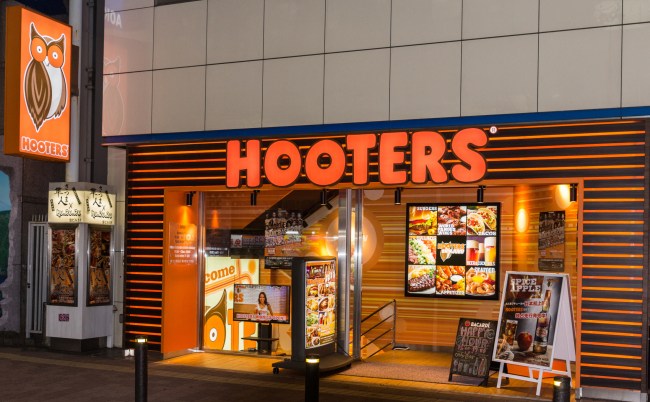 A few years ago, BroBible  learned that the causal dining institution known as Hooters opened a new location in New York City, where we call home. The snazzy location on 33rd Street was said to have “a great view of Madison Square Garden,” which means a busty, scantily clad waitress  in orange shorts and a tight tank top can serve you wings and Coors Light to scarf down before Rangers and Knicks games. This was great news for the bridge and tunnelers who think nearby MSG watering-holes like Mustang Sally’s, American Whiskey, Brother Jimmys, and Rattle and Hum are too “mom and pop” for a trip into the city for the game.

This news sparked quite a discussion internally here at BroBible about Hooters, a novelty restaurant that exists as two uniquely American values: For people to drool over waitresses and stuff fried food in their faces. Is it actually a good place to eat? Are the wings all they’re cracked up to be? Do they hold a flame to Buffalo Wild Wings or other dining experiences? Is it a pleasurable dining experience?

Some think it’s heaven on earth. Other’s think it’s fried garbage that isn’t even worth the kitsch. Here’s how our team discussion went down:

Cass: Should we review a new restaurant next month?

Chris Illuminati: We should ask to be there for hiring process. Set up a desk outside and call ourselves “the first round.

Brandon Wenerd: I’m not ashamed to say that I ate lunch at a Hooters in Atlantic City this summer.

J. Camm: I ate at one in Emerson NJ. Wings were delightful.

Brandon Wenerd: They always are.

Kyle Koster: Hooters has the worst food of any restaurant I’ve ever eaten.

Chris Illuminati: There’s one a couple miles from my house.

Brandon Wenerd: It’s probably my grandparents top 5 favorite chain restaurants. They rate the girls. “The girls in the Ocean City one aren’t as good lookin’ as the ones in Myrtle Beach” is a conversation I once overheard. I think I was 13 years old.

Chris Illuminati: I haven’t been in years.

Kyle Koster: You are saying some shit, Brandon.

David Covucci: My grandpa used to love Hooters too

Cass Anderson: It’s good, they’re classy. Anyone who says otherwise has only been to bad Hooters.

Doug Charles: My mouth waters just walking in there.

Cass Anderson: My fiancee is a vegetarian and even she agrees their food is awesome.

Brandon Wenerd: You just gotta stick to the chicken there. That’s the key. Venture away from chicken, you’re fucked.

Jason Cammerota: The wings used to suck and then they finally started serving them without the added connection.

Cass Anderson: A.) 99.5% of anything fried in the Northeast sucks ass. Because every restaurant thinks it’s okay to fry everything in the same fryer. So I can understand how if you’re from the north you might have a skewed sense of Hooters. B.) Hooters deserves a Michelin Star.

Doug Charles: No wonder I get funny looks when I make it rain there.

Doug Charles: Actually that’d be a funny video. Walk into a Hooters and make it rain.

David Covucci: We should get tickets for the Opera at Carnegie Hall and pregame with some Hooters.

The final tally on The Great BroBible Hooters Debate

David Covucci a.k.a. Mr. Apathy: “It’s like, whatever. If i’m at a hooters i will eat it and not complain, but i won’t go to a hooters to eat food.”

Jason Cammerota: “Hooters is not a place you should eat if you’re feeling health conscious, or if you travel back in time to the early aughts when the food sucked. But if you’re living in the here and now and looking to fill your face with succulent chow that’s not artery “friendly”, then Hooters is a great option. I had it in my mind that the food there sucked and then a trip there this summer really changed my outlook. In short: Yay.”

Me: Hooter’s all day.

So there you have it. A house divided, but marginally pro-Hooters. I personally am excited about Manhattan having another Hooters not just for the potential of a team visit, but also so I have a place to bring my grandparents when they visit this winter. Bring on the comparison to the one in Myrtle Beach and the many, many more they’ve visited in their travels.

What are your opinions of Hooters? Weigh in anonymously in the comments, wing fiends.