Teen Girl Randomly Finds Her Doppelgänger At The Mall, The Internet Finds She Has 5 More Clones 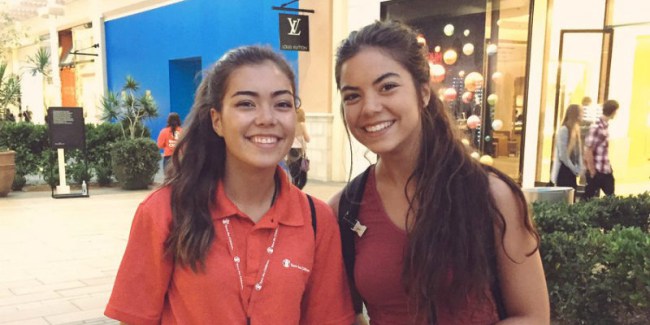 In this great big world there’s gotta be a doppelgänger for everyone right? Ugh. That means that there’s another Lena Dunham and Chris Brown out there somewhere. Scary thought. But for us to find our clone in a huge world that has nearly 7.5 billion people seems impossible. This girl not only found her doppelgänger, but found six people who could be her twin.

Santana Gutierrez randomly met Isobel at the Fashion Valley Mall in September. Isobel was working for the Save the Children fund, and approached Santana. The two quickly realized that they look exactly alike.

“I kind of felt bad ‘cause I wasn’t listening to what she was saying — all I was thinking was, This girl looks exactly like me,” Santana told BuzzFeed.

They exchanged contact info and took a picture together.

The internet found that the 17-year-old girl not only had one doppelgänger, but six.

@santanaa_g ummm I found your 3rd clone… y'all are triplets man 😂 pic.twitter.com/eelv9AftyB

Santana hopes to meet all six of her look-alikes one day. I hope I meet my doppelgänger when I’m at the bar and run out of the bar and he gets stuck with my $150 tab.