That moment when you go to buy something and your credit card is declined is mortifying. Everyone in line is making assumptions about your broke ass. You just try another credit card right? Not this fuckstick. This maniac goes ballistic and looks to do harm to anyone or any cash register in his immediate vicinity.

On February 11, a gentleman was purchasing a bag of M&M’s at a 7-Eleven in Santa Ana, California. That’s when he got hit with the dreaded “Insufficient Funds” and his credit card was declined for the purchase of candy. That’s when keeping it real went wrong.

The unnamed man attacked the cashier when his 75-cent purchase was declined. Damn, it was that small snack size of M&M’s, not even like the 5-pound bag of M&M’s.

“How do we know the card wasn’t stolen? We don’t at this point. I mean it wasn’t reported,” said Cpl. Anthony Bertagna of the Santa Ana Police Department. “It just came up that it was non-sufficient funds to buy a 75 cent bag of M&M’s.”

Hopefully this is some really edgy guerilla marketing for M&M’s.

CCTV video shows the sugar-loving criminal attack the clerk, then shove the cash register and printer off the counter. Then throw bananas at another employee and push another register to the ground. Hey dude, eat a Snickers, you get angry when you’re hungry. Oh wait, nevermind. You trying to buy a Snickers with your credit card will probably cause you to have another meltdown and burn down the 7-Eleven.

Police estimate the damage caused to the store is around $700. I hope for his sake that they were at least Peanut M&M’s. I’d hate to see someone go to jail for five years over some plain M&M’s.

Police are currently looking for the nutjob.

Doesn’t this joker know that this is how you handle the embarrassing credit card declined moment? 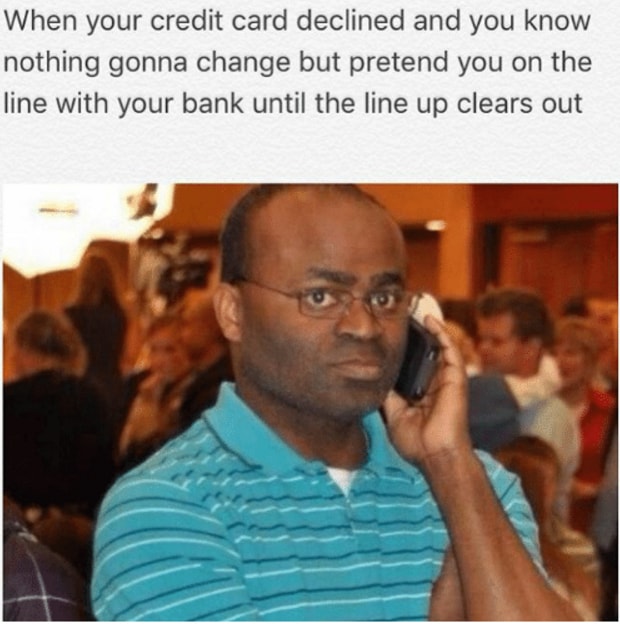