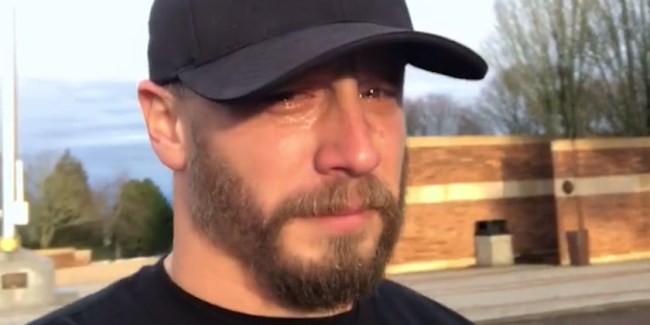 Over the past eight days, we have witnessed massive protests. That is outstanding. That means we still live in a democracy that grants the right of the people to peaceably assemble and have freedom of speech. You have every right to protest and voice your opinion. However, during the protests we also saw many American flags being burned. Burning flags is again protected under the 1st Amendment and you can lawfully do so. But maybe before you burn your next American flag you should hear what this Marine veteran’s opinions on burning the flag.

Eric Post is a former combat engineer who served in the mid-1990s at Camp Lejeune and is now co-owner of a real estate company. When he saw people burning the American flags during protests against President Donald J. Trump on Friday’s inauguration he was filled with emotion. He immediately decided to go down to confront protesters at Pioneer Courthouse Square in Portland, Oregon where a protest was happening.

He left his house and was on his way to the protest when his wife of 21 years asked him to not go to the inflamatory situation.

“On my drive, she used a pretty powerful weapon against me,” he told Task & Purpose. It was a text from his daughter that said, “I love you daddy.”

Instead of going to the protests, which may have resulted in some very bad things, he went to nearby Willamette National Cemetery.

Stepping out of the car to collect his thoughts, he found himself near the area of the cemetery dedicated to the memory of local Medal of Honor recipients, and he started reading the plaques describing their acts of bravery. “I found myself overcome with emotion that there were thousands buried there that did not have the ability to tell their stories and speak up the way I can,” he remembered.

Eric had a message to the protesters and every American, so he took out his phone are delivered a powerful speech as he fought off tears.

“Hey protesters, if you want to burn the flag, it’s your right. I get that. I’m amongst thousands of people that fought for their country and served. I’m standing by the gravesites of medal of honor winners. If you feel like it’s your right to burn the flag okay. Maybe you can meet me up here some time and we can take a tour and you can learn a little about sacrifice and pride and honor.”

I’m truly at a loss for words. I don’t get emotional, but coming up here right now after seeing footage of what’s happening is sickening. I’m disappointed. Most importantly, I’m ashamed for the people that are buried here.

Look me up if you want to come up here and we can talk about it. I’ll happily let you read what real heroes have done. Real heroes. Not cowards with a lighter and a store-bought flag. That doesn’t mean anything to you. Your day will come. You’ll get wise one day and realize the symbol of the flag isn’t what you’re protesting. That’s what gives you the ability to protest. You should cherish that. Not burn it.”

The video went viral and has been viewed over 2.5 million times on Facebook and has been shared 60,000 times.

Post was serious about meeting people who wanted to burn the flag to educate them on those who have made real sacrifices in the name of that flag. Two days later he stood beside the flagpole that overlooks the cemetery and spoke to a crowd of more than 100 people who wanted to hear what they have to say.

“If you’re just simply trying to piss people off, you’re doing a pretty good job of it,” he said. “Please have your grievances with the newly elected president. That’s okay. But please don’t disrespect you and me in the process.”

Post urged Americans to see the flag as the one common ground that ALL Americans can share and rally behind no matter their beliefs, political ideology, or background.

“Wouldn’t it be cool if the immigrant that came here and was able to start a business and escape the prosecution of where they’re at — that’s what the flag means to him. Why would that protester burn it for that person?”

By the way, not one flag-burner showed up to this speech. But one woman drove four hours to hear what Eric had to say.

She told Post that she was from Palau, the South Pacific island that had fallen to the Japanese during World War I, liberated by American forces in World War II and later granted sovereignty. Holding his hands in hers, she told him that his original Facebook video had found its way to the island, and that her countrymen had asked her to come deliver their thanks in person.

So while we may have different principles and convictions, maybe we should have one common bond in honoring the American flag for what freedoms it enables all of us as well as all of the brave individuals who made so many sacrifices to ensure that you and I can enjoy our freedoms that most take for granted.