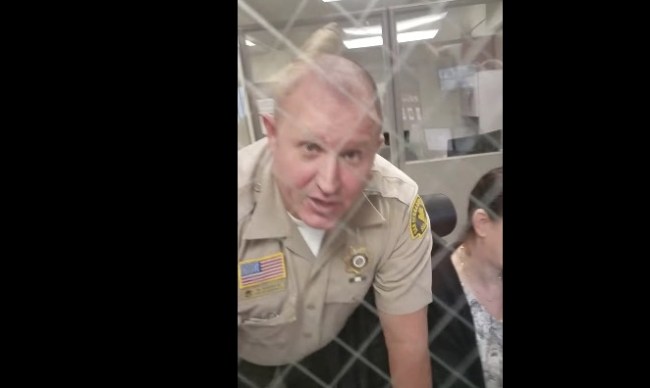 A California police officer was captured on a cellphone camera threatening to ‘create’ charges and throw an innocent man in jail over nothing. This footage is DEEPLY disturbing, with the implication here that this could’ve happened hundreds of times without someone having the camera running.

The incident occurred when Duncan Hicks, 34, went to the Victorville precinct to file a child custody report. Instead of treating him like a human being the officer threatens to arrest the innocent man on trumped up charges, AND he brushes off the man’s complaint by telling him ‘you have baby mama drama’.

I’ve included two versions of the incident filmed on Duncan’s cell phone. The first is a shortened/edited version from a local news outlet and the second is the full 8-minute clip showing all of the officer’s threats. Everything about this is totally fucked.

Here’s a transcript of the exchange via HuffPo

“Duncan, you know what man, I’m about getting tired of you and you’re about to go to jail,” the deputy can be heard saying after Hicks requests his badge number.
“For what?” Hicks asks. The officer responds: “I’ll create something, you understand? You’ll go to jail, you understand that?”
Hicks replies: “You can’t say that. How you gonna create something? That’s against the law.”
The officer then appears to notice that Hicks is recording the exchange and says, “That’s illegal without my knowledge. You want to go to jail for that, too?”

The local sheriff’s office said they are conducting an ‘administrative investigation into this incident’, and HuffPo‘s investigation into Duncan Hicks’ background shows that he has never been arrested before. Duncan said another office apologized to him for the threat but brushed it off saying the officer probably ‘just had a bad day’, which is fucking insanity…Did it really look like that was the first time this cop has used that threat? Did the threat of creating charges and putting him in jail not seem to come rather naturally?

Thankfully, 99.9999% of cops are great people, and I won’t be judging this officer’s colleagues because he’s a shit head.