BULLSEYE: Special Forces Sniper Takes Out ISIS Sniper From An Astounding 1.5 Miles Away 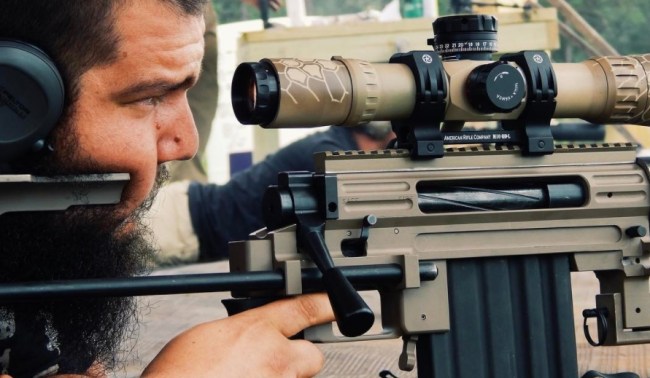 A battle between two snipers lasted for over four hours, but the deadly game of cat and mouse did not end well for the ISIS gunman. A marksman for the Special Air Service (SAS), which is a special forces unit of the British Army, was able to take out an Islamic State fighter from an astounding distance of 1.5 miles away!

Iraq’s special forces have declared “game over” in their mission to recapture the last remaining districts in western Mosul from the Islamic State but fighting still rages on in a handful of neighborhoods. In one of those areas where Daesh is lingering, an SAS sniper had a shootout with an ISIS sniper.

The British marksman was using the American CheyTac M200 Intervention gun system, said to be the most powerful rifle in the world.

The ISIL fighter was using a Russian Dragunov gun, which the SAS servicemember witness him use to kill and wound several Iraqi military members. But that was about to end.

Two weeks ago, the terrorist was leaving a burned-out building. The SAS gunman spotted him and pulled the trigger once and took him down.

“It was like a game of cat-and-mouse and at one point the SAS almost gave up, believing that the terrorist had gone to ground,” the Daily Mail reported. “Just as the light was beginning to fade the gunman moved into what he thought was a safe location and lifted his rifle up into his shoulder before the SAS shot him dead.”

From a remarkable 1.5 miles away, the SAS sniper was able to gun down the ISIS jihadist. The distance was so extraordinarily far that the bullet took three seconds to reach the other gunman. The lethal shot was said to hit the terrorist in the throat.

The CheyTac M200 Intervention gun is made in America system and holds the record for the world’s longest shot. The M200 Intervention system costs between $11,700.00 – $13,800.00 and is ranked the #1 sniper rifle in the world by The Military Channel’s top ten sniper rifles. The rifle features a built-in a computer that informs the shooter to make adjustments based on factors that can alter a shot of great distances such as humidity, heat, and wind.

The CheyTac M200 Intervention rifle is said to be capable of “vaporizing a person’s organs from 2,500 meters” and is the sniper of choice by Navy SEALs, GROM operatives in Poland, Turkey’s Maroon Berets, and the Italian army.