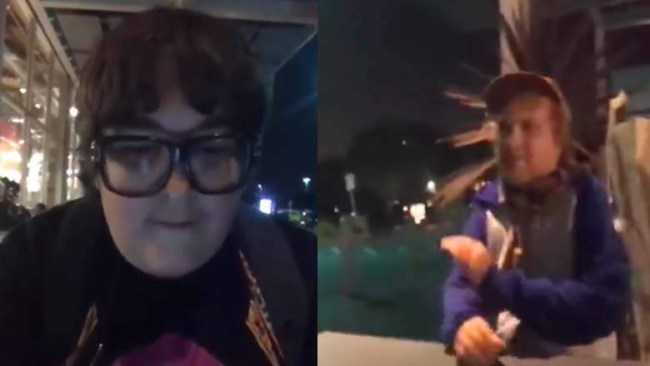 I for one enjoyed The Andy Milonakis Show. The wacky, oddball, curious, preposterous show featured ridiculous songs and celebrity appearances by the likes of John Stamos and Snoop Dogg. The show ended in 2007, but Andy has still been around making entertainment such as his music video “Drake Songs.”

He also livestreams on Twitch and on a recent broadcast he got hit on by a creepy homeless guy. The older gentleman, who said his name was William Bowes, introduced himself to Andy. The fella tells Milonakis that he’s throwing a party and Andy is invited. The man informs Andy and his audience that he just spent the last seven days in jail, but the cop released him after he promised him a sandwich.

The man asks Andy, “Hey I like your gear, we can make movies from here to eternity, do you want to start tonight or start Saturday?”

The man may think that Andy is much younger than he looks. Milonakis, who is 41-years-old has a growth hormone deficiency, which makes him look and sound like a boy in his teens.

Bowes then asks Andy, “May I enjoy this lollipop?”

That’s totally not weird or anything.

Bowes offers Milonakis some cookies. That’s a sweet gesture until the dude then brings up the topic of sex immediately after offering the baked goods.

“Where do you hang about?” Bows asks Andy. “Guess what, you’re coming with me… and guess what, I haven’t had sex in 5 years and I’m not having sex until the time comes… I’m not just about to abuse my friend, especially with the camera.”

Talk about a change of topic.

The possible pedophile keeps telling Andy to turn off his camera and stop recording. I can’t imagine why?

The man goes to the store to get “tobacco cigarettes” and “fuck with these pigs.”

The creeper then says, “One cigarette for the boy, my man.”

Then the ghoulish man begins to suggestively lick his lollipop in front of Milonakis.

“If I touch you the wrong way, you strike me,” he says.

Bowes tells Andy to take a walk with him as he continues to fellate his lollipop.

The deviant then begins to sing a song about being in a psych ward set to Bob Dylan’s “Knockin On Heavens Door” and Andy makes it a duet.

This video is just bizarre. Totally and completely odd and disturbing.

Where’s Ralphie when Andy needed him most!?!?!