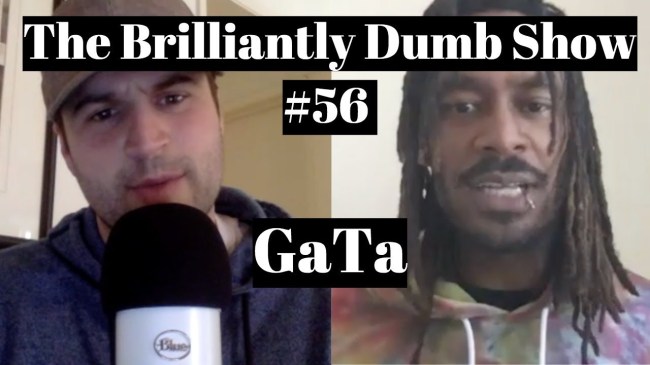 The Brilliantly Dumb Show just released episode No. 56 where we sat down with Lil Dicky’s sidekick GaTa to discuss the success of their new show ‘Dave’ on Hulu and FXX. The show is not even seven episodes into the first season and already has people talking about it being one of the best comedies of the year.

A huge reason for the hit has been GaTa who is Lil Dicky’s best friend, sidekick, and hype man in both the show and in real life. Til this day Lil Dicky has not performed a single concert without his wingman GaTa right by his side.

GaTa expressed in the interview that a good reason for why he thinks the show has had so much success is the authenticity of the whole series. Although maybe exaggerated at times, these are real-life scenarios and very similar to what he and Lil Dicky go through in their day to day lives.

The connection and chemistry between Lil D and GaTa are hard to ignore and make the show as natural as possible. Although actors tried out for the role of GaTa, there was no doubt in Dicky’s mind that he would end up playing himself in the show. That is looking like it was the right move as ‘Dave’ continues to be talked about and watched every Wednesday. Be sure to subscribe to The Brilliantly Dumb Show for the full interview with the hype man himself and tune into ‘Dave’ every Wednesday at 10PM EST on both Hulu and FXX.